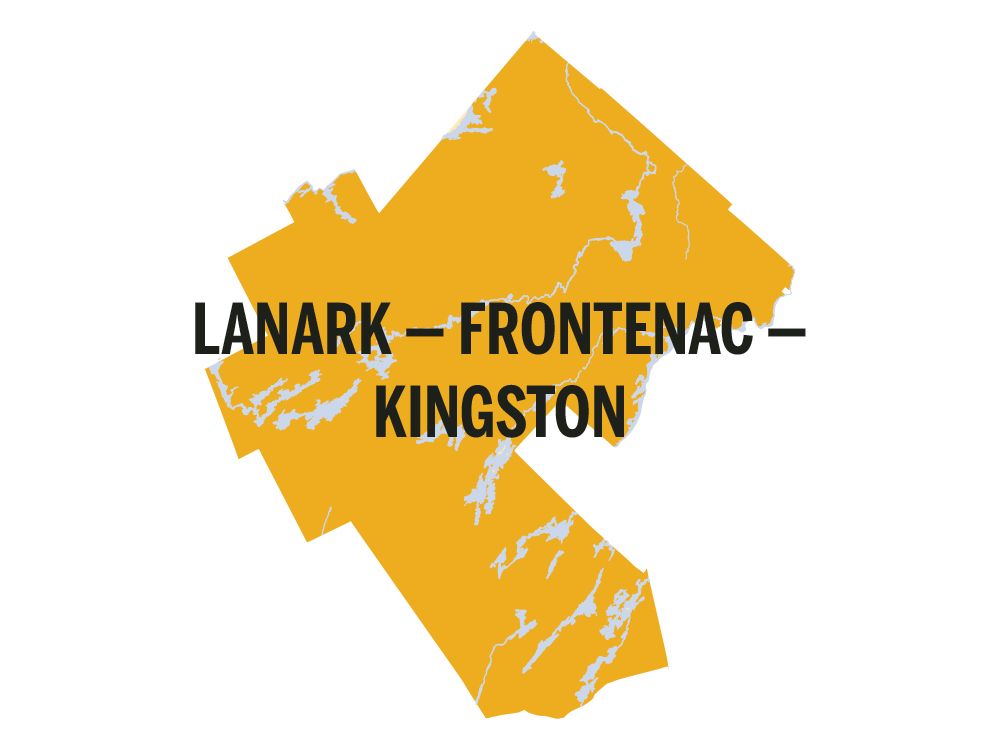 Where is the Lanark-Frontenac-Kingston riding?

Lanark-Frontenac-Kingston takes in large swaths of rural areas west and south of Ottawa and includes the fast-growing towns of Almonte, Carleton Place, Smiths Falls and Perth and a portion of Kingston north of Highway 401.

Among the key issues in this riding: access to high speed internet and cell phone service, attracting and retaining family doctors and supporting business.

What is the electoral history of this riding?

Randy Hillier, love him or hate him, has been the MPP of Lanark-Frontenac-Kingston and its predecessor riding, the tongue-twister Lanark—Frontenac—Lennox and Addington, for almost 15 years.

Now, the riding faces a future without their divisive and controversial MPP.

Hillier, a property rights advocate who stood for “individual liberty and personal responsibility” has often coloured outside the Progressive Conservative party lines. He was suspended from the PC caucus by Premier Doug Ford in February 2019 and went on to promote anti-lockdown, anti-mask and anti-vaccine causes as an independent MPP.

“The cheese slipped off the cracker with this guy. He’s gone rogue,” Ford said last October during a media briefing.

On March 3, Hillier announced he would not run for re-election. On March 28, he turned himself in to Ottawa police to face nine criminal charges related to the “Freedom Convoy” occupation in downtown Ottawa. Hillier was released with a lengthy of conditions.

Some supported Hillier because he was the PC candidate. Others supported him because of his rough-hewn populist appeal. But the demographics of the riding are also shifting. Towns in the riding close enough to Ottawa and Kingston for commuting are drawing new residents from the city, which may shift voting patterns. It may split the vote.

Who are the candidates running in Lanark-Frontenac-Kingston?

The question is whether Hillier’s supporters will shift en masse to support PC candidate John Jordan.

Jordan is the recently-retired CEO of ConnectWell Community Health. He has an executive MBA from the University of Ottawa and a bachelor’s degree in economics from York University. Among his priority issues: improving long-term care and helping small businesses get back on their feet as they emerge from the pandemic.

Jordan has PC bonafides  — he was born and raised in Lanark County, the son of Leo Jordan, who was Lanark-Renfrew MPP from 1990 to 1999 when he lost to Liberal Liberal MPP Sean Conway in the newly-created riding of Renfrew-Nipissing-Pembroke.

“I’m here to support the PC strategies,” said Jordan. “I’m not worried about going after Randy’s followers. They will have to make up their own minds.”

Meanwhile, the NDP won a respectable 30.47 percent of the ballots in 2018 and can be considered a credible threat. The NDP’s candidate this time around is Drew Cumpson, a disability rights advocate with a compelling back story.

Cumpson was a student at the University of Guelph in 2011 when he was injured while swimming during a trip to Peru, leaving him a ventilator-dependent quadriplegic. He continued with his studies, graduated with a commerce degree and founded a consulting company that helps businesses comply with accessibility legislation.

Health care is Cumpson’s biggest priority along with affordable and accessible housing and climate change. He spent 51 months in hospital after his accident. “I learned about health care from the inside. From the patient side,” he said.

The Liberals won 10.6 per cent of the vote in 2018. This is Amanda Pulker-Mok’s second time on the ballot. An elementary teacher and former Mississippi Mills councillor, she said constituents want to talk about affordable housing, incentives for electric vehicles and access to primary care.

“I think people are looking for change,” said Pulker-Mok. “People are open to talking about what issues are important to them and what each party is bringing to the table.”

Marlene Spruyt, a retired family physician and former medical officer of health in two jurisdictions in northern Ontario who has lived in Ardoch for the past four years, is the candidate for the Green Party, which attracted 4.79 per cent of the vote in 2018.

Spruyt said has always be interested in the environment, but sought the Green nomination to draw attention to climate change and issues around rural poverty.

The field of candidates is rounded out by Brenda Bell Folks of The Peoples Political Party, Marcin Lewandowski of the New Blue Party and Curtis McNaughton, a NOTA (None of the Above Party) candidate.