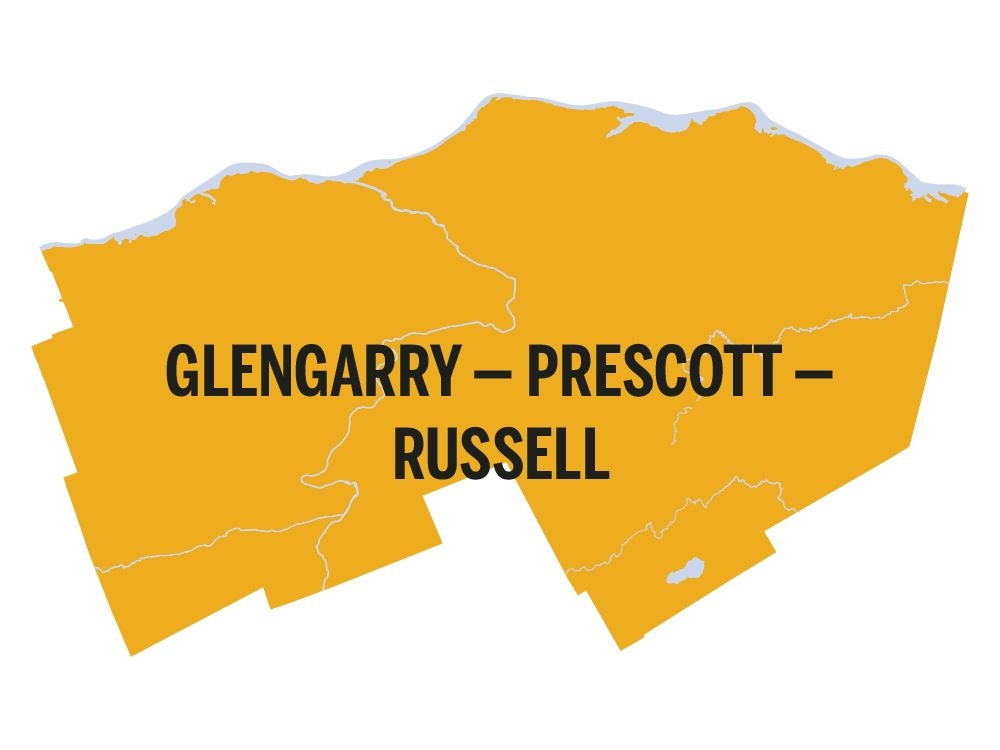 Where is Glengarry-Prescott-Russell located?

Created in 1996 when provincial ridings were reconfigured to match their federal counterparts, this sprawling and principally francophone riding stretches east from Navan and Russell to the Quebec border, mixing farmland with a broad industrial base.

Following a slight tweak in 2005, Glengarry-Prescott-Russell now includes much of the former municipality of Cumberland, plus the municipalities of Clarence-Rockland, Russell, Alfred and Plantagenet, the Nation, Casselman, Embrun, Hawkesbury, Champlain and North Glengarry.

What is the recent electoral history of Glengarry-Prescott-Russell?

In 2018, Amanda Simard, then the Progressive Conservative candidate and formerly a Russell Township councillor, wrested the riding from the Liberals. Historically, Glengarry-Prescott-Russell has been painted red both provincially and federally, except during the Stephen Harper years when Tory MP Pierre Lemieux was elected here.

Simard was elected after two-term Liberal MPP Grant Crack, a former mayor of Alexandria, retired. Garnering more than 40 per cent of the vote, Simard is the first woman elected to represent the riding at both the federal and provincial levels.

Who are the candidates running in Glengarry-Prescott-Russell?

Simard, now 33, made waves after just a few months at Queen’s Park. She left the Tory caucus in the fall of 2018 after publicly denouncing the Ford government’s decision to eliminate the independent office of the French-language services commissioner and a planned French-language university.

“The people of my riding voted me in to represent them at Queen’s Park, not to sell them Conservative cuts they overwhelmingly oppose.” Simard subsequently wrote in defense of her decision.

Simard sat as independent MPP until January 2020, when she joined the Ontario Liberals.

Simard is the party’s critic for a range of issues: francophone affairs; agriculture, food and rural affairs; heritage, sport, tourism and culture; and small business and red tape reduction

She was also one of four Ottawa-area Liberal MPPs who this year wrote Ford and Solicitor General Sylvia Jones to ask the provincial In a letter to enact schedule 1 of the Comprehensive Ontario Police Services Act, which would allow the policing costs during “Freedom Convoy” protests to be recouped from its organizers.

A fluently bilingual native of Embrun, Simard was an only child raised mostly by a single mother, brought up in circumstances that she has described as “low-income.” She graduated from the University of Ottawa’s Faculty of Law in 2013 and worked as an adviser and assistant in the Senate from 2010 to 2017. In 2014, Simard was elected as a councillor in Russell Township.

Sarrazin, an Alfred native, has been the mayor of Alfred and Plantagenet since 2018 and was educated at Algonquin College as an electrician. Posting on his campaign’s Facebook page, Sarrazin said his priorities include developing infrastructure and roads, expanding high-speed internet service, increasing access to natural gas, stimulating the agricultural sector and new technologies, and boosting the tourism industry.

Paquette’s Twitter account describes her as a “Hungarian folkie, mom, (and) farmer.” Riden, who has two bachelor’s degrees from Carleton University, is a gardener who has worked for Beau’s All Natural Brewing Co. Embrun-born Brisson, 67, is a former leader of the Libertarian Party of Canada.