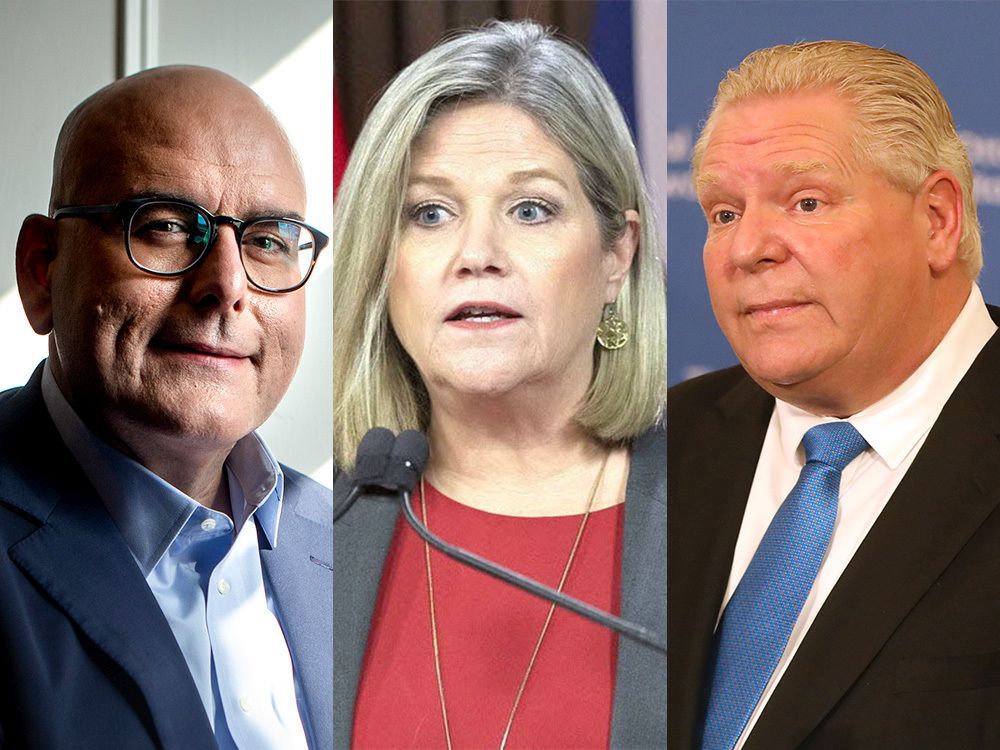 The race for Queen’s Park has officially started and Postmedia is here to provide wall-to-wall coverage in advance of the June 2 vote. Our daily liveblog will keep you posted on the latest happenings on the campaign trail as the party leaders travel the province in search of votes.

Conservative Leader will be in Bowmanville to make an announcement Friday morning, and in the Oshawa and Durham region for other campaign stops and to canvas. He will also meet virtually with the Big City Mayors.

NDP Leader Andrea Horwath will be in the Golden Horseshoe on Friday, with a 9:15 announcement in Burlington where she’ll talk about her party’s plan to make homes more affordable, followed by a meeting with the province’s Big City Mayors Caucus.

She’ll also visit a brewery in Burlington, then head to Brampton in the afternoon, where she’ll announce plans to extend healthcare services there.

Green Party Leader Mike Schreiner will be in the London area on Friday, where he’s expected to make announcements on jobs and climate change.

His first event of the day, though, is an 8:30 a.m. virtual meeting with the Big City Mayors Caucus, after which he’ll appear at a London animal hospital fitted with a solar metering system, where he’ll make a climate/jobs announcement. He’ll have a tour of the installation, then head out for some canvassing. In the evening, he’ll be in Caledon with Dufferin-Caledon candidate Laura Campbell to speak at a Stop the 413 rally.

The Ontario Liberals unveiled their education platform on Friday, saying they will offer an optional Grade 13, reduce class sizes, and put 1,000 more mental health professionals in schools to help students cope with the emotional effects of the COVID-19 pandemic.

Liberal Leader Steven Del Duca made the announcement in Kitchener, saying that the reintroduction of Grade 13, a four-year pilot, will provide students the opportunity to spend more time on required courses for post-secondary education. It would also allow students to catch up on lot time during the pandemic, and add new courses, including those in personal finances, civics, and mental health and wellbeing.

The plan also calls for a cap of 20 students per class, the construction of 200 new schools, hiring 10,000 teachers and 5,000 more special education workers. It would also expand the Student Nutrition Plan, end streaming and EQAO tests, the latter to be replaced with a new assessment strategy, and eliminate the requirement that students obtain two online credits before graduating.

The NDP updated its housing platform on Friday, promising to encourage the construction of 1.5 million new affordable homes over the next decade, including starter and rental homes.

Leader Andrea Horwath made the announcement in Burlington Friday, saying the New Democrats would end exclusionary zoning and update growth policies in pedestrian- and transit-friendly neighbourhoods, and establish Housing Ontario, which would finance and build at least 250,000 affordable, non-market rental homes in the next 10 years.

The plan, she said, would see a net cost of $3.7 billion over the first four years.

The New Democrats also said they would provide help for first-time home buyers, including giving people from households with incomes under $200,000 access to home equity loans of up to 10 per cent of the purchase price to help with their down payment.

Horwath also reaffirmed her party’s commitment to protect renters from gouging, and ensure renters can move back to apartments following renovations, without rent increases.

“For years, the Liberals and Conservatives made life more expensive, said Horwath, “including letting speculators drive our housing out of control. And Doug Ford favouring his developer buddies will only make things worse. Building big highways to big mansions no one can afford isn’t going to help anyone afford a home.”

The Tories say they’ll invest $730 million to bring all-day GO service to Bowmanville, with additional stops at Thirnton’s Corners East, Ritson Road and Courtice.
The extension, Ford says, along with plans for Highway 413 and the Bradford Overpass, and doing away with tolls on Highways 412 and 418, will help families save time and money.

According to the Liberals, party leader Steven Del Duca approved the GO train expansion to Bowmanville when he was transportation minister in 2016, and the Tories delayed it.

Ontario’s Green Party announced on Friday that it intends to fund tuition and apprenticeships to 60,000 young people over the next four years, providing them the skills and experience to work in the “climate economy.”

Party leader Mike Schreiner made the announcement in London.

“Climate and the economy go hand in hand,” he said. “But Doug Ford’s hostility to a greener future is holding Ontario back and hurting our economy while other jurisdictions and countries speed ahead of us.”

The plan, which will fund one year of college tuition and a year of post-graduation work, will target recruitment of women, Indigenous people and racialized communities.

“It’s time to invest in the jobs of tomorrow, not the polluters of the past,” Schreiner added.