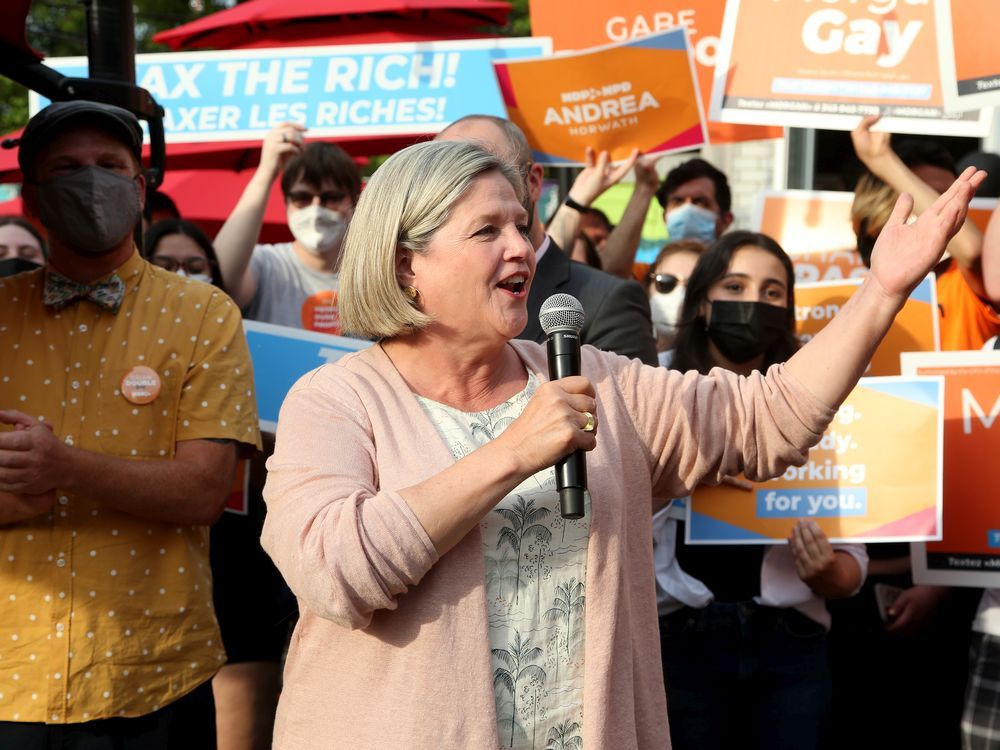 With three days before the provincial election, Ontario NDP Leader Andrea Horwath held a rally for supporters in an Ottawa riding her party hopes to snatch from the Conservatives.

Horwath stopped at the popular Beachconers ice cream and coffee shop in Britannia in the Ottawa West-Nepean riding Monday evening. She gave a short speech to a crowd of about 250 people, many holding NDP signs for Ottawa candidates or wearing orange shirts, then mingled with the crowd.

Horwath hit some of the key NDP platform promises, from health care to education.

Horwath urged supporters to vote on June 2. Both Horwath and her party’s Ottawa West-Nepean candidate, Chandra Pasma, took digs at Conservative Leader Doug Ford, who also visited the riding Monday with an event staged on top of the building leased by the Ottawa Citizen and Ottawa Sun.

“We’ve had one leader who chose to hide on top of a building and not come near any people,” said Pasma.

“I guess because he didn’t want to answer any questions about his cuts and bad choices.“

The Ottawa West-Nepean riding is held by Conservative Jeremy Roberts, who won by only 175 votes against Pasma in 2018. Supporters at the rally were bullish that Pasma will win this rematch.

“This is going to be one of the most nail-biting ridings in the provincial election,” said Austin Wang, a grade 12 student at the rally. Wang said he has been spending 20 to 25 hours a week campaigning for Ottawa NDP candidates, door-knocking, leafleting and “technical stuff” like setting up a server on the Discord platform popular with gamers and young people.

“I’m sort of new to politics. I would never give up the opportunity to meet the leader of the NDP.”

James Brunet, who wore a T-shirt that said “people over profits,” said he likes the NDP‘s strong support for publicly funded health care, including prescription drugs.

“I take medication that’s very expensive,” he said. His partner had to stop taking anti-depressants one summer because she could not afford them, he said.

“It was a really sorry moment for me. That’s around the time I started getting involved with the NDP.”

Roberts has represented the riding for one term, but Ottawa West-Nepean also has a strong history of Liberal representation. Bob Chiarelli held the seat for the Liberals between 2010 and 2018. Before that, it was held by Jim Watson, who resigned in 2010 to run for mayor of Ottawa. Watson won the seat in 1999 from Conservative Gary Guzzo.

The Liberal candidate in the riding for the provincial election is Sam Bhalesar. Federally, the Ottawa West-Nepean riding is represented by Liberal MP Anita Vandenbeld.

Ottawa was Horwath’s third campaign stop on Monday. She was joined in the morning by the president of the Ontario Nurses’ Association in Toronto to talk about ending health-care cuts, then stopped in Peterborough to meet supporters and local candidates.

Incumbent MPP Roberts has served as parliamentary assistant to the minister of children, community and social services. Pasma is a researcher with CUPE, an activist and a former policy advisor for the federal NDP. Bhalesar is an advisor in the federal public service, a community volunteer and longtime Liberal. Steven Warren is running for the Green Party of Ontario, and Vilteau Delvas is running for The Ontario Party in the riding.

(Ford’s campaign stop Monday took place on the roof of the building leased by the Ottawa Citizen and Ottawa Sun. Neither the Citizen nor Postmedia played any part in organizing the event and were not given advance notice of it. The building is owned by Regional Group, which authorized its use by the Ford campaign.)