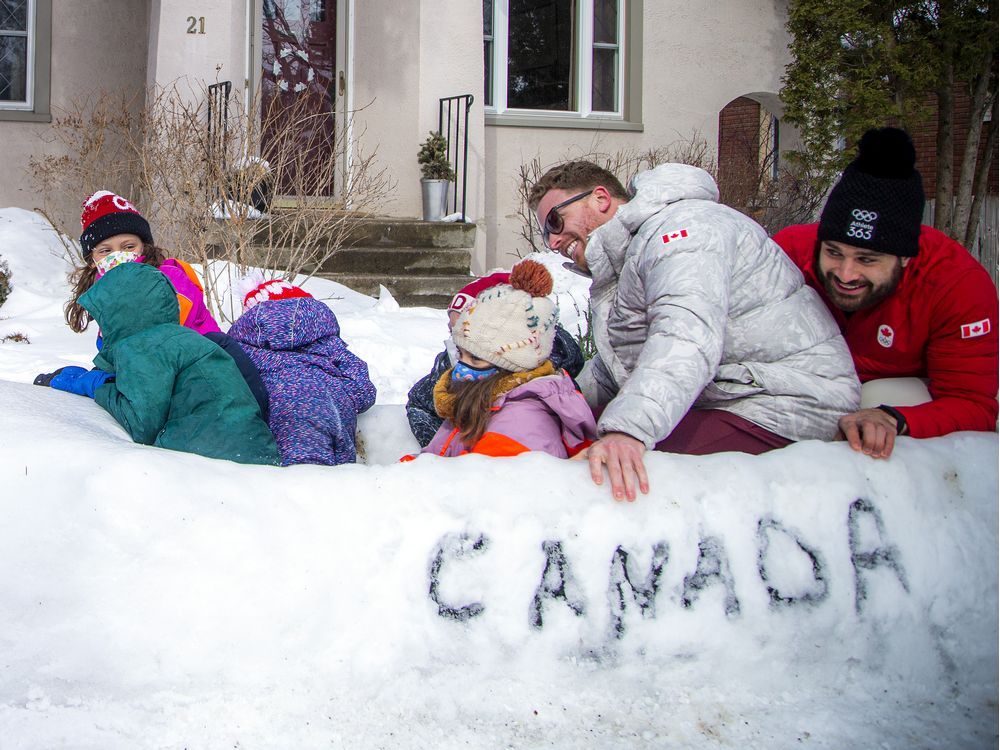 The kids built the bobsled entirely out of snow on the front lawn of the Edina Street home of Ole Sorensen, a 1972 Olympic wrestler whose son, Cody Sorensen, was competing at the Beijing Olympics.

The sled became a neighbourhood magnet, with teams of kids practising bobsled “drills,” running on the spot and leaping into the sled, helmets and all.

Mom Stephanie Rochon Perras posted a video of the drills and put it on Twitter, where it went viral, getting more than 54,000 views.

“I decided to post it because we were trying to reach the team to let them know how proud we were of them,” she said.

The young fans got a surprise Sunday afternoon when Sorensen and teammate Mike Evelyn, both Ottawa natives, checked out the bobsled and shared Olympics memories with their young fans.

“I didn’t now about it until the Olympic team posted the picture. I looked at it and zoomed in, and realized that was my childhood home,” said Sorensen.

Sorensen, a four-time World Cup medallist, got his start as a track athlete, winning Ontario provincial high school hurdles honours as a student at Glebe Collegiate Institute, then continuing his track career at the University of Guelph.

He used his talents as a sprinter when he started competing in bobsledding in 2008. He became a four-time World Cup medallist and was named the 2010 Ontario male athlete of the year.

Sorensen made his Olympic debut in 2014 at Sochi, but the sled overturned and he suffered a concussion.

He completed an MBA and is now director of mergers and acquisitions at Welch Capital Partners.

Getting back into bobsledding started as a fitness goal, he said.

“About a year ago, I bought a treadmill. But my friend Chris (Spring), who was the pilot of the sled at the Games, came to Ottawa last summer.”

Spring is almost 38 and Sorensen is 37. They are getting older in a sport where the top performers are typically in their late 20s and early 30s. But Sorensen thought he would give it another try.

Rochon Perras said Canada’s bobsledders have been an inspiration to the children in the neighbourhood, especially after Sunday’s visit.

“They must be exhausted, but they took the time to come and see the kids.”