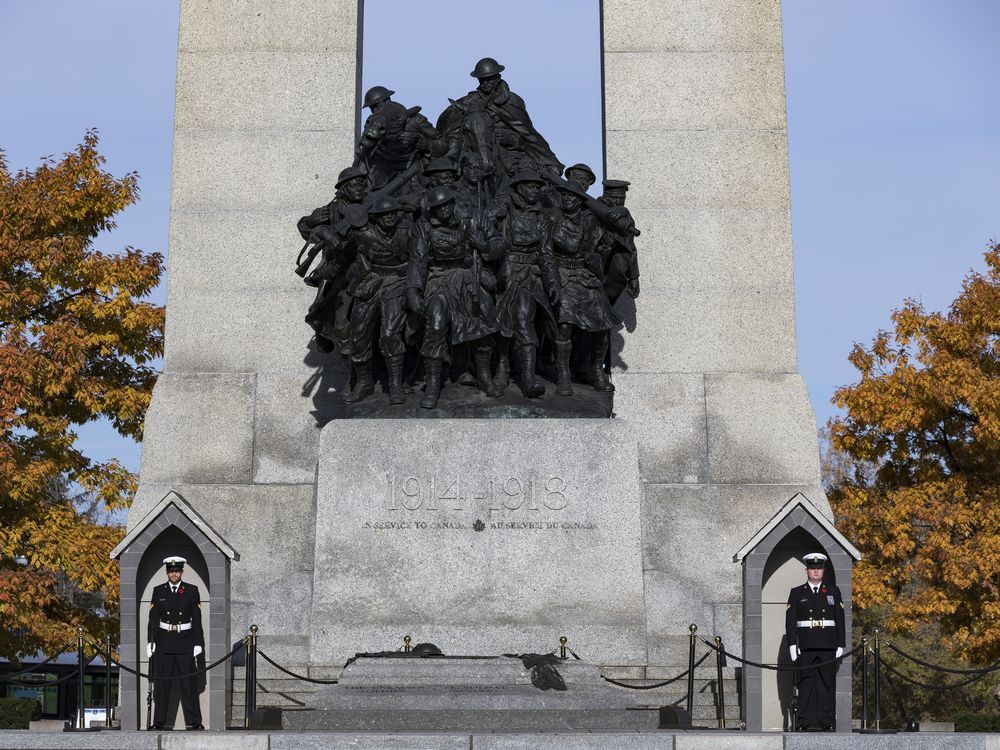 Ottawa police say they will not lay charges against a man who was captured on social media with a U.S. flag draped over the Tomb of the Unknown Soldier.

“The man was identified and spoken to,” the service said in a statement. “He showed remorse for the incident and police are confident that he will not repeat it. As no criminal charge was laid, we will not release further information, including his name.”

The image of the man standing by the tomb circulated widely on social media, drawing outrage and appearing to be linked to supporters of the “Freedom Convoy.”

Anita Anand, Canada’s minister of defence, said in a tweet on July 25 that the events “disturbed” her.

“The right to protest is something those honoured at the tomb sacrificed their lives for, however the desecration of this memorial is unacceptable and shameful,” she wrote.

The memorial has become a focal point recently as the site of protests and ceremonies performed by groups connected with the “Freedom” movement.

The Department of National Defence said in a statement that the National War Memorial is “considered sacred ground and a symbol of sombre tribute that should be respected by all who visit it and not used for messaging for any ideological perspective.”

Stacey Barker, a historian at the Canadian War Museum, said that, although the National War Memorial has undergone changes since its inauguration in 1939, its intention remained the same. “It’s to honour those who served in war, those who died in war,” she said.

The monument was initially conceived out of the desire to commemorate the 66,000 dead and 172,000 Canadians wounded in the First World War.

The bronze figures on the monument represent the different branches of Canada’s military. Their march through the stone arch is meant to symbolize Canadians’ willingness to answer the call and head to war.

It has been the site of several high profile acts of vandalism and mischief over the years. One of the most notable instances occurred on Canada Day in 2006, when a teenager was photographed urinating at the monument. “That created a bit of a furor,” Barker said, and it led to two armed guards being stationed at the monument to “reinforce the message that this is a place to reflect and to honour and to be respectful.”

Then, in 2014, Cpl. Nathan Cirillo, 24, a reservist on ceremonial sentry duty, was fatally shot by self-proclaimed Islamic terrorist Michael Zehaf-Bibeau. Zehaf-Bibeau ran into Centre Block where he was shot and killed in a shootout with parliament security personnel.

More recently, security has failed to prevent vandals or protesters from desecrating the monument.

There have been 17 reported incidents of desecration at the National War Memorial in the past five years, according to a report on the protection of monuments devoted to veterans which was submitted by the Standing Committee on Veterans Affairs to the House of Commons in June.

Five of those desecration incidents occurred since the “Freedom Convoy” protests began in late January. During the protests, a woman danced atop the Tomb of the Unknown Soldier and protesters urinated nearby. At the request of the City of Ottawa and the National Capital Commission, fences were erected around the National War Memorial, but protesters who described themselves as veterans removed them.

Ottawa police chose not to charge the woman filmed dancing on the tomb, the service said in April. Instead, she was “processed by other means,” and showed remorse, the police said. Offenders who commit mischief to war monuments can be imprisoned up to 10 years and face a $1,000 fine.

But the Standing Committee on Veterans Affairs recommended that prison sentences and fines not become the main consequence for those caught desecrating monuments. “The committee believes that alternative dispute resolution mechanisms would more likely have a positive impact in terms of both deterrence and awareness,” the report read.

War memorials and monuments require protection, the report concluded, but they must also remain accessible to the public.

The committee recommended Public Services and Procurement Canada, which oversees the National War Memorial, “review its security incident playbook following the events of the 2022 occupation of the National War Memorial site, in consultation with federal and municipal partners and stakeholders, to ensure it will meet the needs for potential future mass protests.”

But, more important than fences or guards is the need for education, the committee highlighted. The federal government, it said, should increase awareness campaigns on the importance of all of Canada’s national war memorials and monuments to “ensure all Canadians know the significance of these sacred sites.”