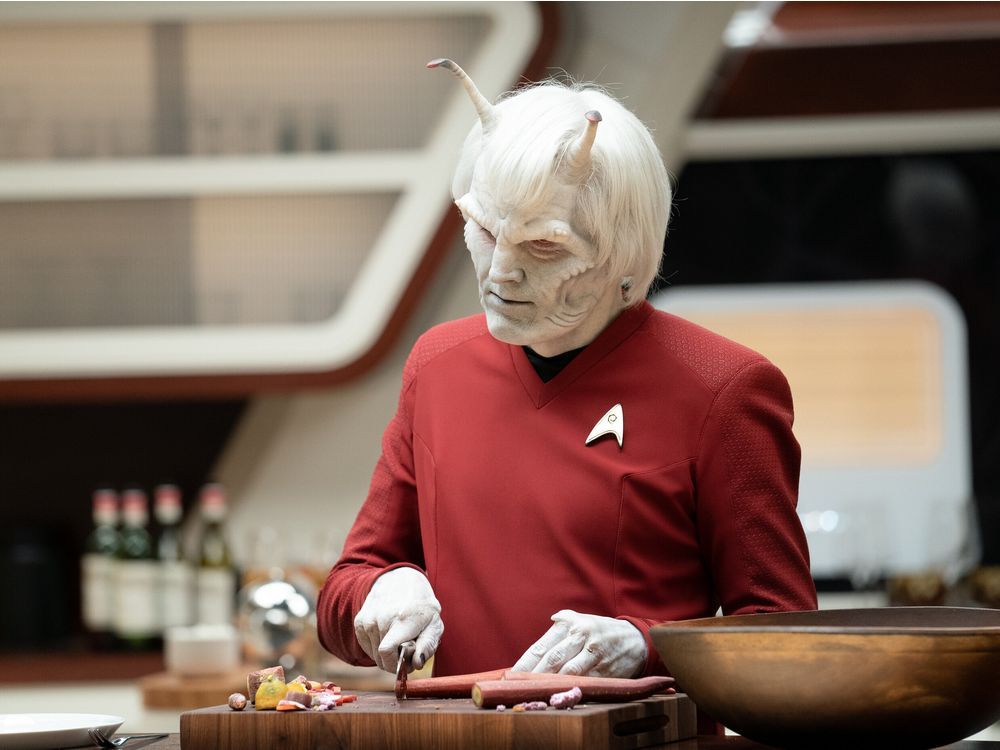 Our first real introduction to Chief Engineer Hemmer in Star Trek: Strange New Worlds comes this week in the second episode of the newest instalment of the franchise.

Of course, we are sworn to secrecy about plot points that have yet to air and the second episode isn’t scheduled to run until Thursday, May 12. For now, fans have only caught a glimpse of Hemmer as part of a closing montage that ended last week’s episode and showed him beaming aboard the Starship Enterprise for the first time. But he does make an appearance early on in the second episode in a revealingly awkward, and very funny, exchange with Nyota Uhura (Celia Rose Gooding).

In Strange New Worlds, Uhura is a fresh-faced cadet who is also new to the Enterprise. She is one of a number of famous Trek characters who appear in the series, which is officially a prequel to the original and also includes Captain Christopher Pike (Anson Mount), Spock (Ethan Peck) and, in Season 2, a young Captain Kirk (Paul Wesley.) We won’t give too much away about the conversation, except to say that he takes umbrage at some of Uhura’s assumptions about his “impairment.” Hemmer is an Aenar, an ice-dwelling subspecies of the Andorians who are blind but have enhanced abilities in other areas. This was also the first scene Horak read and the one he used for his audition.

“The thing that really got me excited about it is that, even though his eyes don’t work, he’s got this incredible telepathy,” says Horak, in a Zoom call from his home in Stratford, Ont. “So basically he sees by using (telepathy), which reminded me of Daredevil and his ability to see even though his eyes don’t work. It reshaped and reframed impairment and disability. I just got really excited about being able to bring some of my own life experience with one sense of mine, which is diminished, shall we say. How do the other senses heighten and compare? If I had the sense of telepathy, what could I possibly do with it and what other great things, artistically, could I get away with?”

Born in Calgary, Horak lost most of his eyesight as an infant due to rare cancer. Despite having just nine per cent vision, he became an accomplished painter, musician and veteran actor well-known in Calgary’s theatre community. Producers casting the role of Hemmer were specific in calling for an actor who is visually impaired.

Horak is also an unabashed Trekkie who grew up watching reruns of the original series with his family. Still, while the blue-skinned, white-haired Andorians have been part of the Star Trek universe since the original series, up until now the Aenar subspecies have only appeared in a few episodes of Star Trek: Enterprise back in the early 2000s. So part of Horak’s research into the role consisted of finding out all he could about the Aenar from the Memory Alpha website, a portal for all-things Trek. It describes them as icy-white beings who are meant to look like albino versions of the Andorians. They are capable of reading minds and use telepathy to communicate with each other. Most are completely blind. Like the Andorians, they have two antennae.

Beyond that, and judging by his early scenes, Hemmer appears to be one of those great Star Trek archetypes who is supremely confident of his abilities but not particularly social and certainly not one to suffer fools. There was, however, very little personality overlap with the actor who plays him. So Horak said the three-and-a-half hours he endured in the makeup chair each morning was a bit of a blessing. Each day he would be fitted with 15 individual prosthetic pieces glued to his face and hands, which would then all be air-brushed and painted.

He says the process was actually very zen-like, kind of like being in a spa. These marathon sessions also allowed him to get into character.

“I get to put on the face and build the character,” Horak says. “He just kind of emerges in front of me. He is very different from me: His mannerisms, the way that he moves, his confidence. He’s just got this presence. And that begins and, in a lot of ways, ends with the new face.”

Horak is no stranger to physical transformations. He was last in Calgary for Goblin: Macbeth, which had Horak and Rebecca Northan playing Shakespeare’s power-hungry couple under elaborate goblin masks for a 10-day run at Vertigo Theatre this past March.

The actor moved to Ontario in 2020 to be part of the Stratford Festival. COVID delayed the production of An Undiscovered Shakespeare, which was written by Northan and to co-star Horak and is believed to be the first improv comedy show. But he decided to stay and participated in several pandemic projects with Northan.

But his history in Calgary theatre goes back to his days in Mount Royal’s drama program in the mid-1990s. One of his early roles was performing in Mermaid’s Three Wisdoms for a Calgary children’s theatre. After the show, kids in the audience would often ask if an actor playing a deaf character was also deaf. It inspired him to write and perform What You Can’t See in 1999 about a boy who lies to hide the fact that he is legally blind. “I thought it would be great for the kids to see someone who was really deaf or really blind performing, so they could see that we’re just as normal as they are,” he told Postmedia at the time. Since then, he has travelled throughout Canada performing a wide variety of theatre roles and becoming a renowned visual artist. In 2018, he debuted his one-man show Assassinating Thomson in Stratford. He would tell the story of Canadian artist Tom Thomson’s mysterious death in 1917 while sharing anecdotes about his own experiences becoming a painter. Each night, he would also paint a portrait of the audience over the course of the show.

Horak says having a legally blind actor play a blind character is a “great step forward” in terms of on-screen representation.

“I’m very honoured to be able to do this,” he says. “I know that being cast in a show this size is like winning the lottery for any actor of whatever ability. The door was open and the casting call explicitly said that and I felt that this was my chance. This was the one. The door is open finally and the rules are in my favour.”

As for Hemmer, Horak can’t reveal too much of what is in store for Season 1. When interviewed for a Trek-based website, the actor disagreed with the interviewer’s assertion that the character was a “little cranky” and a “bit of a curmudgeon.” No, Horak countered, he is just always correct.

He said he took inspiration from something his engineer brother, Steve, once said.

“He gave me this great phrase, which was ‘as an engineer, there are only two things in the world I can’t fix: A broken heart and stupid,” he says. “I’ve got to give credit to Steve Horak for that one.”