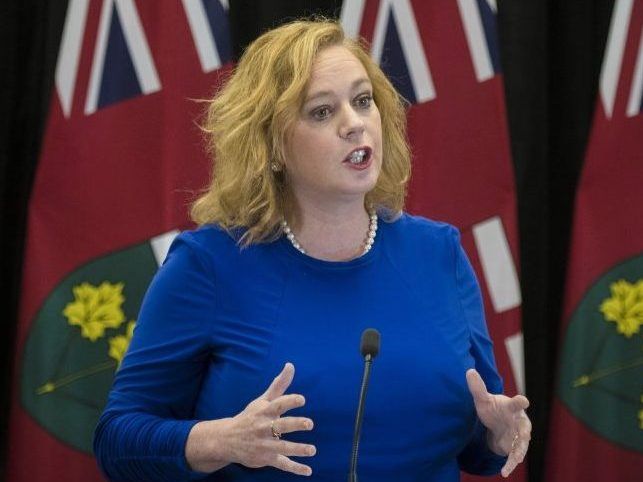 Lisa MacLeod, the longtime MPP who is seeking re-election in Nepean, received an “MPP’s allowance” from her Progressive Conservative riding association while she was earning a six-figure salary as a cabinet minister.

Over three years, between 2018 and 2020, that allowance totalled $44,000. The information, contained in the Nepean PC riding association’s financial statements, was released by the provincial NDP party Monday.

Catherine Fife, the NDP candidate for Waterloo, said she was shocked to learn MacLeod had been receiving the top up from her local riding association, especially since cabinet ministers are paid six-figure salaries, have travel, meal and hospitality expenses paid and, like other MPPs, receive a monthly housing allowance.

“To see an MPP have to top up their living expenses to the tune of $44,000 is quite shocking,” said Fife during a virtual press conference Monday. “I have never heard of this happening.”

Both the NDP and Liberal opposition parties said none of their MPPs received an allowance or expences from their riding association.

A a cabinet minister, MacLeod, who served as both minister of heritage, sport, tourism and culture industries and before that as minister of children, community and social services, was paid $165,850 in salary. In addition, MPPs who live more than 50 kilometres from Queen’s Park receive a monthly housing allowance, something that was hiked 20 per cent by MPPs in 2019. MacLeod’s was more than $2,300 a month.

Although the NDP acknowledged that giving the MPP an allowance from the riding association is not illegal, Fife said it is an issue of “ethics and integrity.”

“We know people have been dealing with higher costs,” she said. “While most people are left to struggle on their own, Doug Ford has let one PC MPP take a $44,000 top up from the Nepean Riding Association.”

“I think people are going to be surprised that a sitting MPP, a PC minister, dips into her riding association to upgrade her life at Queen’s Park.”

She said members of the local riding association should be aware that “this MPP was using their donations as an ATM to make her life more comfortable.”

Fife said she would like to see Elections Ontario investigate the issue.

According to the financial statements, MacLeod received MPP allowances of $18,200 in 2018, $16,727 in 2019 and $9,500 in 2020. In the 2019 riding financial statement, the $16,727 is listed as “housing/exp allowance”. Expenses charged to the Nepean riding association, such as travel and food expenses, were listed separately on the association’s annual report.

No NDP MPPs receive special allowances from their riding associations, she said.

“This is a real departure.”

MacLeod was first elected to the Ontario Legislature in 2006.