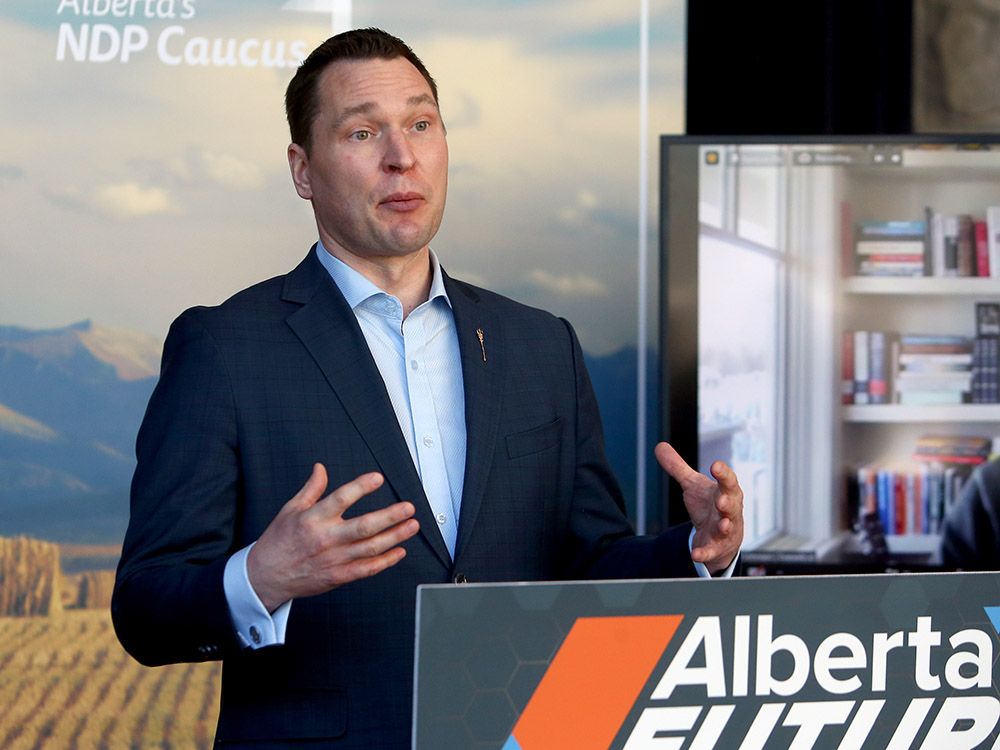 Dramatically falling consumer confidence in Alberta driven by raging inflation points to an urgent need for a provincial government flush with energy royalties to take action, say its critics and anti-poverty advocates.

The Opposition NDP says a Conference Board of Canada survey showing consumer confidence fell more than 20 per cent in Alberta last month compared to a national average drop of 8.8 per cent is a troubling indicator, even as the UCP government last week announced a $3.9-billion budget surplus for 2021-2022.

“Their numbers are a serious warning sign for Alberta,” said Deron Bilous, the party’s critic for Jobs, Economy and Innovation.

“The government of Alberta is failing to support Albertans at a time when costs have shot up.”

In May, Alberta’s inflation rate was 7.1 per cent, while in Calgary it reached eight per cent, the highest level in nearly 40 years.

It comes at a time when Russia’s invasion of Ukraine and pent-up travel demand has led to oil prices soaring, which have filled provincial government coffers at record numbers.

But Bilous said that hasn’t been trickling down to most Albertans.

“There is a lot of money flowing into Alberta, but it’s clear that Alberta families are not seeing any of it,” he said. “We’re not seeing companies re-investing that money back into Alberta.”

The province’s de-indexing provincial income taxes and disability benefits while cutting other social payments and removing caps on utilities and auto insurance rates have only deepened Alberta’s fiscal plight.

“We do acknowledge Alberta’s budget improves as energy prices go up so there is a strong argument that Alberta’s government should reflect that by helping people with the cost of energy,” he said, noting the province has already suspended its 13-cent per litre gasoline tax.

And he took a shot at the federal Liberal government for not delivering relief at the gas pumps by rolling back its carbon tax, calling it ideological cruelty.

“Ottawa has shown it’s completely out of touch and unfortunately there are some politicians who actually want to drive people into energy poverty so they consume less energy,” he said.

“It’s like trying to fix the problem of people being overweight by making food unaffordable. It’s ridiculous.”

Kenney said the province has no plans to use its budget surplus to ease the financial burdens facing municipalities but added the gasoline tax holiday benefits families by holding the line on school and city transportation fees.

But an anti-poverty advocate said those government actions lack proper scope and urgency given growing despair, particularly among lower-income people.

“There’s a lot of distress in the community right now — every single month we’re hearing conversations that inflation is getting worse and that we’re going to be in this financial crisis for some time,” said Meaghon Reid, executive director of Vibrant Communities Calgary.

Supports that existed in the depths of the pandemic have expired as people are facing increasingly difficult choices on their essential spending, she said.

“The (provincial) government needs to immediately re-index Assured Income for the Severely Handicapped and we need living wages,” said Reid.

Her group estimates about 200,000 Calgarians, or 15 per cent of the city’s population, now live beneath the poverty line, a number that constantly fluctuates for the worse.

Governments, she said, also need to focus on ending homelessness, which would save money in the long term.

With landlords increasingly inclined to see their properties in a booming market, renters are being increasingly squeezed by displacement and higher monthly payments, added Reid.

“If we don’t right the ship now, it’ll cost more in the future … if we don’t do these things, then a surplus isn’t anything to celebrate,” said Reid.

In an email, an acting spokesman for Alberta Treasury Board and Finance said the government reiterated Kenney’s message.

“Alberta’s government is providing substantial relief at the pumps, on electricity and natural gas, and we are considering what can be done to further support Albertans,” said Rob Williams.

“Once again, we also call on the federal government to take action to help families, follow our lead and suspend federal fuel taxes that continue to cause pain for Canadians.”

Meanwhile, the Bank of Canada’s survey of consumer expectations suggests expectations for inflation have also risen with worries about prices for food, gas and rent.

The bank noted that lower-income Canadians and older individuals are more concerned about grocery prices and rent than younger respondents and households with higher incomes.

Consumers, especially those with lower incomes, are adjusting to high inflation by cutting spending, postponing major purchases, looking for discounts and options for cheaper alternatives, it said.