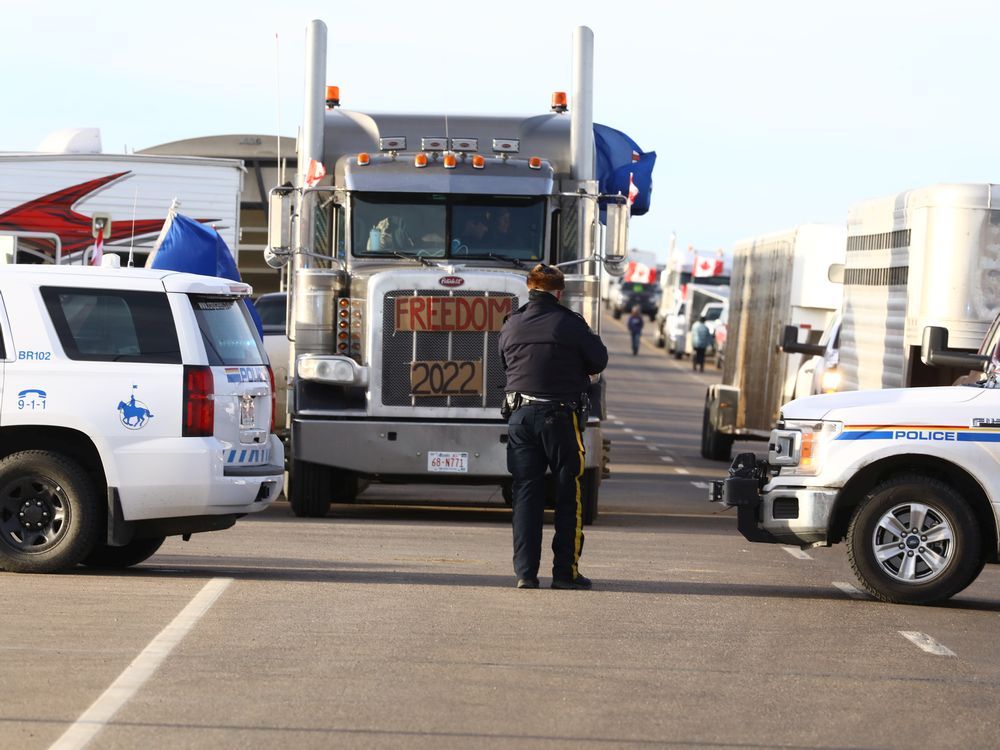 A Lethbridge judge on Thursday reserved her decision on whether a suspect charged with conspiracy to murder Mounties during a blockade protesting COVID-19 health measures will be freed pending trial.

At Der’s request, the Court of Queen’s Bench judge imposed a publication ban on the proceedings, which covers any evidence called, the submissions of the lawyers and her ultimate reasons for allowing or denying bail.

Carbert, 45, of Lethbridge, was charged in February along with three other men with conspiracy to commit murder, as well as mischief by impeding the lawful use of property by others and possession of a weapon for a dangerous purpose.

The arrests followed an RCMP raid on three trailers in the village of Coutts near the border crossing between Montana and Alberta.

They were among 13 people arrested by the Mounties (a 14th has since been charged) after police executed a search warrant in connection with a then-ongoing protest at the border crossing.

Also charged with Carbert with conspiracy to murder members of the RCMP are Christopher Lysak, Anthony Olienick and Jerry Morin.

Defence counsel Jim Lutz was granted a publication ban on that application.

While the four men were initially charged separately, the prosecution has now joined them together and filed a direct indictment, meaning they will not have a preliminary inquiry and their case will go directly to Court of Queen’s Bench for trial.

Der had earlier indicated he wished to have a preliminary inquiry, but the Crown can avoid that step if they get attorney general approval for a direct indictment as they did in this case.

The four accused are due back in court on June 13.

Olienick and Morin have not yet applied for bail. Morin’s lawyer, Greg Dunn, has scheduled a June 24 hearing, while Olienick’s counsel, Alain Hepner, will seek his release on May 27.

The charge of conspiracy to commit murder has a maximum punishment of life in prison and is one of a select few charges where bail can only be sought in Court of Queen’s Bench.

Kubik will hand down a ruling May 27.