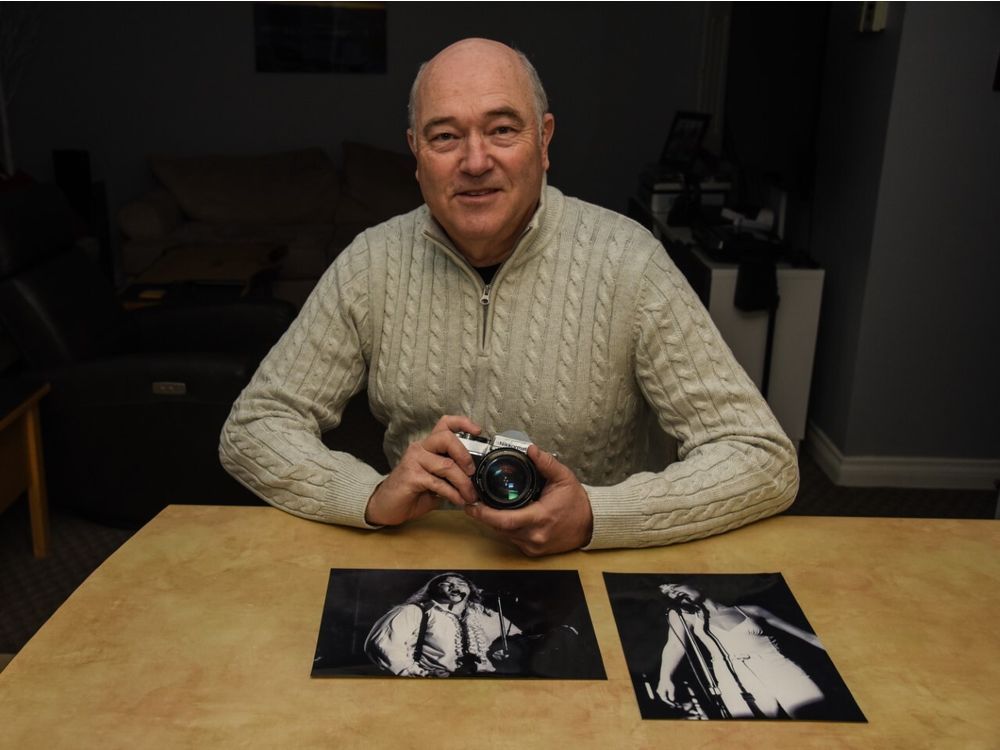 “Take at least 250 pounds of living human flesh. Stir in equal, and generous, portions of Bruce Springsteen imagery and Phil Spector walls of sound. Season liberally with theatrical lunacy from the National Lampoon and The Rocky Horror show. Garnish with Marvel comic-book heroism — or villainy.”

“And you have Meat Loaf.”

Those were the opening lines of the Province’s Aug. 1, 1978, review of Meat Loaf’s concert at the PNE Gardens, where Doug Bower, then 17 years old, was pressed against the stage, shooting photos with a Nikon SLR camera, capturing a rock legend in intimate detail.

“In the ’70s, they had a thing called festival seating,” Bower said, “where you paid one price and it was first come, first served. I always got there early, rushed up to the front and had my SLR camera. No questions asked.”

“I tried to be discreet and had (the camera) tucked under my coat because I didn’t want to draw attention to myself,” he said.

Bower’s efforts gave him intimate access to some of the biggest rock acts that came through Vancouver in the 1970s and ’80s.

“The show was very theatrical,” Bower said of Meat Loaf’s performance that night. “They were totally hamming it up for Paradise by the Dashboard Light” because of the romantic teenage theme.

Jeani Read’s review for the Province also noted the Paradise by the Dashboard Light performance, calling the song “the high (roughly speaking)” point of the evening.

“The long, hot, sweaty teen-sex tragicomedy,” she wrote, was “acted out with exaggerated grappling and pawing by Meat Loaf and Karla.”

Karla being Karla DeVito, the singer who accompanied Meat Loaf and “only occasionally” upstaged the star, according to Read’s review. She was captured in a striking photo by Bower.

Bower also confirmed that the rock star kept an oxygen tank offstage, something noted in the Province’s review.

Read wrote that Meat Loaf would occasionally disappear offstage “presumably to suck oxygen out of the mask that is reportedly always at hand backstage.”

“I could see off to the side between every song he had to have an oxygen mask,” Bower confirmed. “Obviously they were trying to be a little bit discreet but I actually saw that going on.”

According to Bower, who worked for The Vancouver Sun and The Province, his photographic efforts made him something of “the big man” at school.

“I’d always go into the school darkroom and blow up (the pictures) and give friends in the school prints and stuff,” Bower said.

Does Bower have any regrets about the show? Only that he didn’t get both the star and his backup singer together in a single shot.

“I think that would have been an amazing shot to have both of them hamming it up for Paradise by the Dashboard Light,” he said.

Bower said he was saddened when he heard the singer-and-actor had died.

“The world has lost an amazing talent,” he said.

More news, fewer ads, faster load time: Get unlimited, ad-lite access to the Vancouver Sun, the Province, National Post and 13 other Canadian news sites for just $14/month or $140/year. Subscribe now through the Vancouver Sun or The Province.