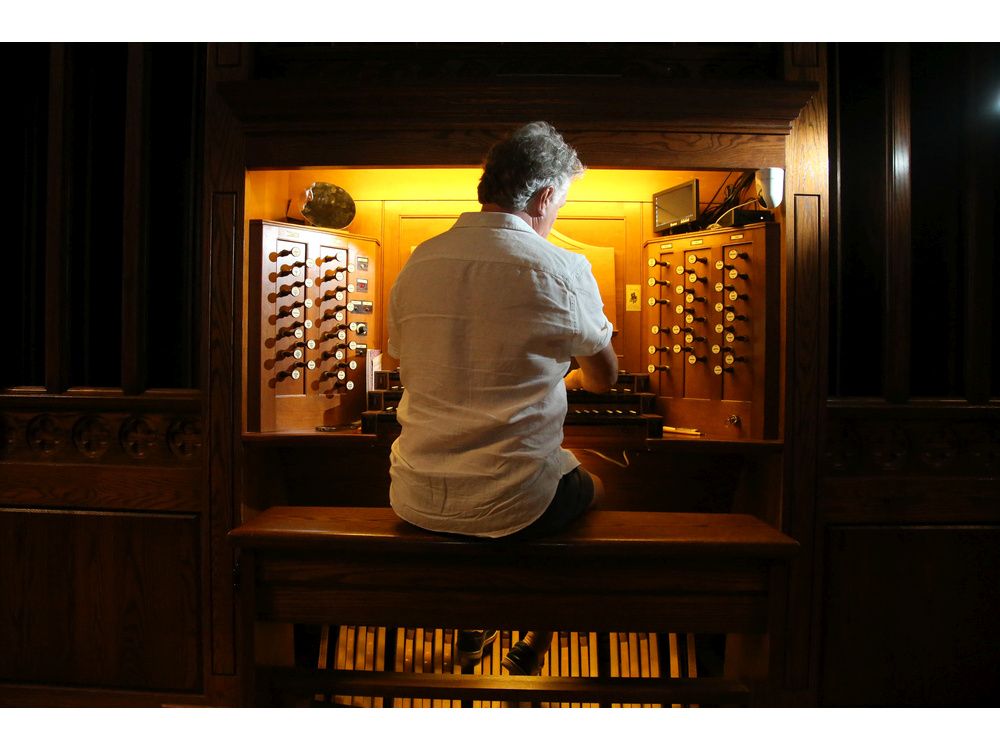 As a son of English immigrants growing up in Canada, Matthew Larkin would  gather with his family around a black and white TV each December to listen to the Christmas broadcasts of Queen Elizabeth II.

‘It was a habit I never kicked. I still impose it on my long-suffering children and mystified American dinner guests,” Larkin wrote in a 1,200-word Facebook post the day after the Queen died this month.

In his thoughtful tribute to the Queen, Larkin wrote that she typically made two points clear in her addresses.

One was the importance of Christian faith in her life, and the other was the example that Christ set in seeing “the value of doing small things with great love.”

After citing many examples, Larkin concluded that Her Majesty was “the Queen of small things done with great love, a Gloriana for the ages.”

Next Tuesday, Larkin, the renowned Ottawa-based organist and custodian of music at St. Andrew’s Presbyterian Church on Kent Street, will use music rather than words to pay tribute to the Queen.

Larkin’s concert, entitled “Music for the End of an Age,” is meant to mark the end of the Queen’s reign with music promoting “an aesthetic of reflection,” the organist says.

The concert will also launch an ongoing series of lunchtime concerts at St. Andrew’s. The series will most please Larkin, its curator, if he plays solo concerts as few times as possible.

Larkin began working on his series about a month ago, and has been able to completely book concerts though to the end of January.

“I only had to take two of them,” he says. “It gives me great joy to cross my name out and put someone else’s name in.”

The series joins the well established Doors Open for Music at Southminster series, which takes place on Wednesdays at Southminster United Church in Old Ottawa South, in presenting free concerts, usually of a classical nature, in an Ottawa church.

Larkin, formerly the long-time music director of Christ Church Cathedral on Sparks Street, recalls that years ago, downtown Ottawa churches resonated with the sounds of free concerts, which eventually disappeared.

“There were lots of these sorts of these options that I thought really contributed strongly to the life of the downtown, like what happens in Europe. Just about any day there would be an awesome free concert in a church,” Larkin says.

“That really informs the culture about a place,” he says. “It feels there’s a kind of spontaneity of musical or artistic expression that’s going on.

“I can’t think of a time when we need that more than at the moment,” Larkin says.

At the cathedral from 2011 to 2014, Larkin ran what he called the Music as Sanctuary series on Thursdays. He has resurrected that name for the series at St. Andrew’s.

“You take sanctuary in the beauty of music,” Larkin says. “It removes you from the business of the world and takes you to another place.”

The church organ will be featured at most but not all concerts. For example, a Nov. 15 concert will star pop-funk vocalist Rebecca Noelle, while on Dec. 20, harpist Caroline Leonardelli will perform Christmas music.

Larkin, who joined St. Andrew’s a year ago as interim custodian of music before his position was made permanent last month, would have begun his series earlier but for the pandemic.

“It was very difficult to know what could and could not be done at that point. The church wasn’t open all of the time. It was premature to do a concert series,” Larkin says.

Due to the pandemic, the Southminster series pivoted to live-streamed programming in 2020 and is to return later this month with concerts that will be both in person and broadcast on the internet.

Larkin says live-streaming from his church is “a distinct possibility,” although it would require an additional person to manage the gear and broadcast. If a worsening of the pandemic prompted a cancelation of indoor gatherings again, then streaming would definitely take place, he adds.

He hopes that it won’t come to that, for the sake of musical interactions.

“My hope is that people will actually show up,” he says. “The joy of live performance is playing and singing to someone you can see — seeing those faces, those eyes, of people who are listening.”

While the concerts will be free, Larkin hopes donations will support honorariums for participating musicians and even build up a bit of a war chest.

After each concert, there will a closing gesture of hospitality — a small thing done with great love, you might say — in the form of a $5 soup lunch.

“I know one or two things about food,” Larkin says. “That’s going to be best soup in town.”