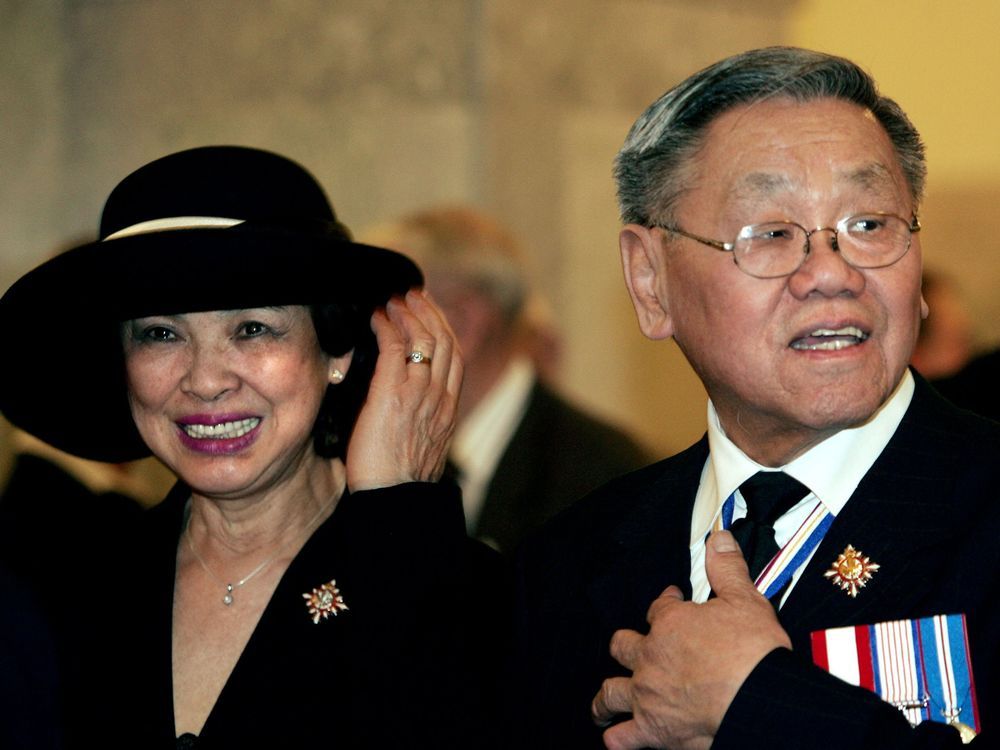 The matriarch of one of Alberta’s most storied families is being remembered as an “unsung hero” of a clan made famous by pioneering football star and civil servant Normie Kwong.

Mary Kwong died April 6, just 22 days shy of her 90th birthday, but her culinary skills that endeared her to so many and helped make her such a gracious host will live on at her memorial service next week, said her eldest son, Greg.

“She was the kind of person who’d go to a black tie function, then afterwards head to Chinatown for noodles or have people back to her home for noodles there.”

Some of those functions would involve her husband Normie’s role as Alberta’s first Asian lieutenant-governor, a post he held from 2005 to 2010.

But he’d been a Canadian sports trailblazer long before that as the first Chinese-Canadian member on a CFL roster, where he flourished as he overcame overt racism and skepticism about his smaller size.

He went on to capture four championships and set numerous records while playing with the Calgary Stampeders and Edmonton Eskimos.

It was as an Eskimos player, known as the “China Clipper,” that he met Mary Lee in her hometown of Vancouver in the late 1950s.

One of seven children in a family that didn’t “have a lot of money,” she’d been crowned Miss Chinatown Vancouver in 1955, noted her son.

“Years later, I would meet people in Vancouver who said they wanted to date my mom but that they couldn’t compete with Normie Kwong,” said Greg Kwong.

“My grandmother was pretty strict — they couldn’t go out a lot.”

Even so, the two married in 1960, the same year Normie retired from football and launched a career in commercial real estate and as a stock broker.

Together they would have four sons, with Mary becoming the anchor of their Calgary household and an ace chef and cooking instructor who’d produce memorable Chinese meals, said her son.

“All four of us boys have fond recollections of family and friends coming home for big meals,” said Greg.

“Her grandchildren’s fondest memories are of helping her in the kitchen.”

Normie was part of a group of business people who brought the NHL’s Atlanta Flames to Calgary in 1980 and was part of the ownership team until 1994, and also played a crucial role in keeping the CFL Stampeders financially afloat.

“The Stampeders thing was actually quite challenging, but my dad felt that was something he really needed to do and my mom supported him in that,” said youngest son Randy.

In later years, as Normie became lieutenant-governor in Alberta, Mary became a beloved and indispensable presence in representing Albertans and mixing with VIPs that included British royalty.

Said Randy: “My dad was actually quite quiet and she was the social person.”

In her obituary, her children and grandchildren described her as an “unsung hero” of the prominent family.

“Normie stipulated that she be included in each of the thousands of engagements, special occasions and functions,” they stated.

“Her presence was an integral element to their popularity, and she met the challenge of being a public figure with grace, professionalism and dignity.”