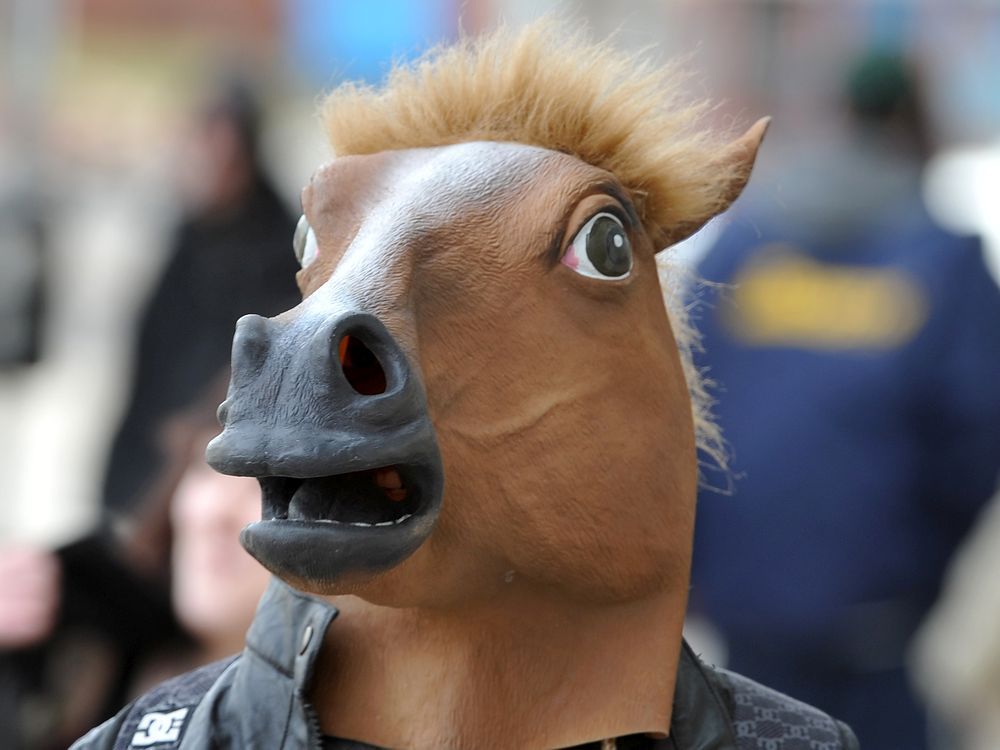 Calgary police have laid charges after a latex horse head mask was left at the home of Mayor Jyoti Gondek.

Calgary police say the incident happened April 19 in the city’s northwest. They would not confirm the location, but said the incident took place in front of a well-known Calgarian’s home where protests had previously been held in the past several months.

CPS spokeswoman Emma Poole said doorbell camera footage showed a man walking up to the door of a home around 3:30 a.m. and placing an anti-vaccine sticker on the door.

Poole said he then left a costume horse head on the front driveway as he walked away.

“He got in his car and kind of raced up and down the street a couple times, excessively revving his engine and leaving skid-marks for approximately 300 feet,” said Poole.

She said the homeowner was unaware anything had happened until the next morning. That is when police were called and evidence was collected, including the latex horse head mask.

The horse head is thought to be a reference to a famous scene in the 1972 film The Godfather, in which a crime boss leaves a decapitated horse’s head in the bedroom of a man he is trying to intimidate.

Based on doorbell camera footage from several locations, police located the owner of the vehicle and arrested a suspect April 24.

Shane Renard Kuelker, 43, of Calgary, faces one count of criminal harassment and one count of stunting in a motor vehicle.

His next court appearance is set for May 27.

Poole said criminal harassment charges stem from the fact that a man went to the residence of a person, allegedly to intimidate them.

“We’ve said it many times,” said Poole. “We are all for free speech and free protest, but it is not OK for people to turn up at the homes of elected officials and make them feel unsafe.”

A spokesperson for the mayor’s office declined to comment on the incident.