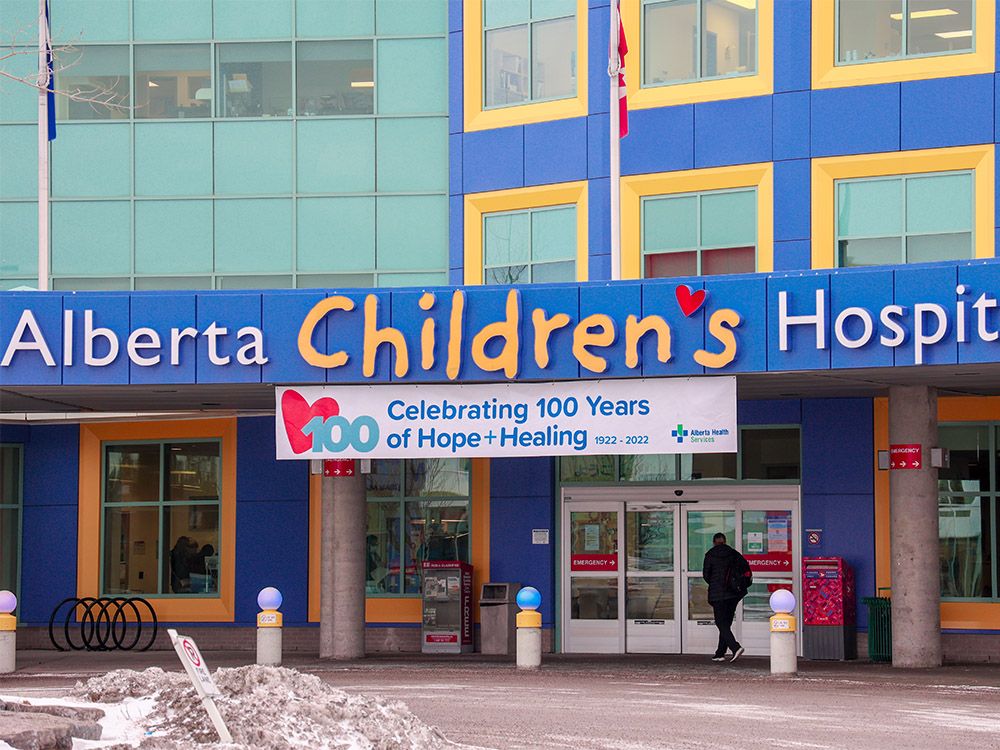 Dr. Shazma Mithani, an emergency physician who spends part of her work weeks at Edmonton’s Stollery Children’s Hospital, said waits at that emergency department in recent days are “unprecedented.”

She said one major sign the department is overwhelmed is that staff sometimes haven’t been able to clear out the waiting room overnight. That means the department is already starting on the back foot to begin the day.

“Patients tend to stop coming overnight, so you can catch up and see all those people without more people coming in. And that’s basically a non-existent thing anymore,” Mithani said Thursday.

“When I went to my 9 a.m. shift at the Stollery (Wednesday), there was already 20 kids in the waiting room, which is unheard of . . . If you start with that, there’s really no catching up.”

Mithani said it’s not uncommon for her to see patients who have been waiting for six or more hours.

“It’s just terrible for the kids and for the parents who have been waiting so long to have their child checked out because they’re worried about them,” she said.

Alberta Health Services said Thursday the wait times at both the Stollery and the Alberta Children’s Hospital in Calgary are sometimes reaching peak levels seen during wintertime.

They said a high volume of “seriously ill patients” is a factor, as well as continued COVID-19 effects, which include staff absences and limited admission to some hospital units due to infection control requirements.

At the Alberta Children’s Hospital, that includes temporary lineups of children with influenza-like symptoms outside emergency room doors.

“When a lineup does occur, nurses are monitoring the queue and the waiting room to ensure that no patient is in critical condition,” AHS spokesman James Wood said in a statement.

“We are working on a system to bring the outside queue to the inside of the building. Our goal is to ensure all people are inside and waiting as short a time possible.”

He described an “imperfect storm” factoring into that, with high rates of COVID-19 coupling with an unseasonably late influenza season. He said it also takes longer to see each patient now compared to before the pandemic due to PPE protocols.

Despite the challenges, Freedman said he’s found families are understanding about the waits.

“There are families that are definitely waiting an inordinate amount of time,” Freedman said. “I’ve not actually had any concern expressed to me by families of prolonged wait times.”

Despite the lengthy wait times, Dr. Eddy Lang said Albertans should know they will be evaluated by triage nurses as they arrive at emergency departments, meaning those in critical need of care will receive attention quickly.

He said the ongoing strain particularly affects patients lower on the triage priority.

“On the adult side, this is first and foremost a problem with emergency in-patients,” said Lang, the department head of emergency medicine in the AHS Calgary zone. He said many of these patients sit in emergency departments because there aren’t hospital beds available for them to be transferred to. This can also cause a backlog in EMS drop-offs, when no space is available for transferring patients.

“The hospitals seeing the worst effects are the South Health Campus and Peter Lougheed, and sometimes every funded bed in the department is occupied with one of these patients.”

Other issues contributing to long emergency wait times include continued COVID-19 patients, staffing shortages and burnout, and arrival of patients who could better be treated elsewhere, Lang said.

He encouraged Albertans to call Health Link 811 if not requiring urgent, immediate care, adding that the majority of people who call the line are advised they can manage the illness at home with over-the-counter drugs or can wait to visit a family physician.

“We’re seeing the equivalent of yet another winter peak in patient volumes, especially in EMS and in emergency departments,” Copping said. “The numbers overall remain in line with past years, but occupancy at a few large sites is well over 100 per cent.”