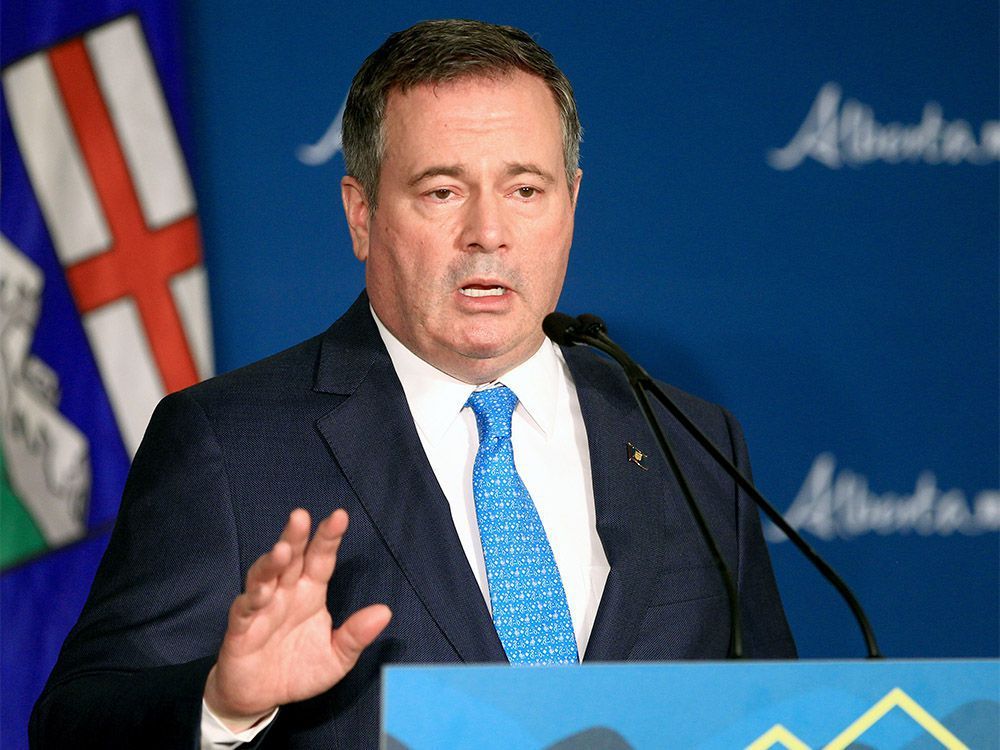 Alberta Premier Jason Kenney’s approval ratings remain in the doldrums as United Conservative members prepare to vote on his leadership this weekend, according a new poll.

The ThinkHQ poll, released Tuesday and conducted March 29 to April 1, found 29 per cent of respondents approve of Kenney’s performance, compared to 69 per cent who say they disapprove.

Current voter intentions would see the NDP form a majority government if a provincial election was held today, the poll found, with the opposition party holding a 12-point lead over the UCP across the province, with greater margins in urban battlegrounds.

“If Kenney stays, the UCP will have its work cut out for it,” said ThinkHQ president Marc Henry in a news release.

“If they have any chance of re-election, Kenney would need to improve his personal reputation in a way that has eluded him for the past 18 months or so. Governments typically don’t get re-elected when their party’s leader is sitting at 30% approval.”

Kenney’s approval ratings have remained low in recent months, suggesting voters have made their mind up about the premier, Henry said. That’s despite some recent moves pundits suggested could move the needle on support, including the lifting of nearly all COVID-19 restrictions, tabling a balanced provincial budget and suspending the province’s gas tax.

Voters’ opinions on the premier appear to have become entrenched, said Blaise Boehmer, a former communications director for Kenney.

“Folks have their opinion of the premier, and it doesn’t matter what he says or does, it will not change — which is problematic for a very unpopular premier,” said Boehmer, now director of corporate communications and public affairs for NATIONAL Public Relations.

“It’s remarkable how little the needle has moved. I don’t think it’s moved positively at all for this government.”

There’s a significant appetite for a new UCP leader, according to the ThinkHQ poll.

Sixty-three per cent of respondents say Kenney should be replaced, with only 22 per cent wanting him to remain at the party’s helm. Those numbers are similar among UCP voters and members, with 61 per cent of members surveyed looking to oust Kenney, compared to 32 per cent looking for him to stay.

The survey also found the UCP’s chance of winning another mandate would rise significantly under a new leader, with 39 per cent of respondents saying they’d be more likely to vote for the party if leadership changed.

It will be weeks before the results of this weekend’s leadership vote are released, after the UCP’s board moved the review online, scrapping the planned in-person ballot in Red Deer citing capacity concerns. Those results are slated to be made public May 18.

Boehmer said he anticipates the leadership review won’t resolve divisions within the UCP. He said he believes a new leader could help to reunite the increasingly fractured party.

“Anything’s possible in politics, obviously, but given how calcified these numbers are against the current premier, it’s very difficult to see a pathway to victory for him,” Boehmer said.

“A new leader, depending on who it is and what kind of tone they strike, maybe one of humility and contrition… I think a leader like that could very much gain more from the centre to nullify what they’re losing with a potentially surging Wildrose Independence Party.”

Support appears to be growing for the revived Wildrose group, with the ThinkHQ poll finding 13 per cent of voters intend to cast a ballot for the conservative splinter party.

Spokespeople for Kenney’s leadership campaign did not immediately respond to request for comment.

The online survey polled 1,135 Albertans between March 29 and April 1. If the data had been collected through a random sample, the margin of error would be plus or minus 2.9 per cent, 19 times out of 20.