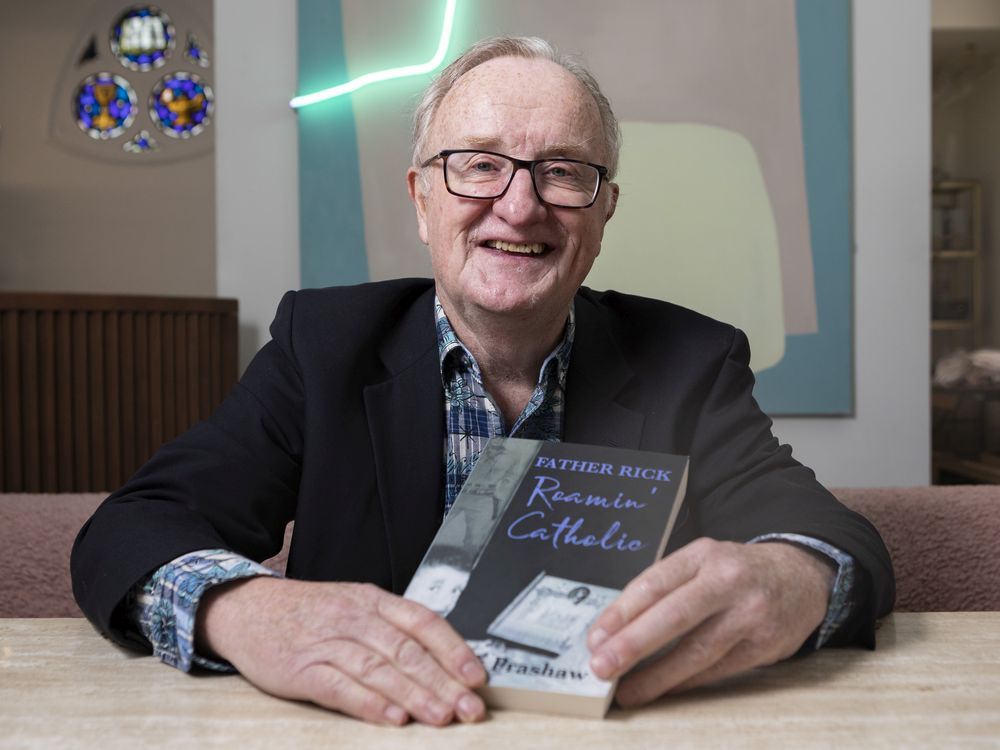 Rick Prashaw has been a Roman Catholic priest and a political aide on Parliament Hill — a shift from the Lord’s work to the devil’s bidding, one is tempted to say.

But we’ll leave the sass — and he’s got a homegrown supply — to the man himself.

“When I saw the stained glass back there, with the chalice, I thought, ‘Is this perfect?’” he said to the crowd of 40, referring to a remnant window in the now-kitchen area.

Prashaw, 70,  is like many born-writers: He composes to figure things out, and there is a good deal there to reconcile.

“You sort things out,” he said the next day after a cold walk with his dog, Dallas. “Writing can surprise you. It can take you places you didn’t think you would go. It felt like going full circle on my life.”

We are guessing Rome has not ordered a copy. “I think the Vatican has a pretty thick file on me.”

He is, after all, a theological nightmare: from a devout family, educated and strapped by nuns, once a committed priest who broke bread with a Pope, then married, divorced, the father of a transgender child, while sympathetic to Indigenous spirituality and grievances, pro-choice views and the prospect of female clergy.

“Are you still Catholic?” is a complicated question for him — it took 313 pages and 90,000 words to answer — the Roamin’ versus Roman.

“I am a believer,” he concluded. “My baptism has been a blessing, its call to service, daring to believe this audacious claim that were are made in the image and likeness of God…

“A God bigger than any catechism taught me. Be who we are. Love who we love. A believer, still standing, astonished by it all.”

A one-time NDP candidate in an Ottawa riding (2004), Prashaw worked on the Hill for 13 years for three MPs. He writes that a Christian faith, by its nature, is political because it seeks social justice, in the vein of both Marion and Paul Dewar, for example — or lesser-known, the once altar girl, now city councillor Catherine McKenney, a guest speaker this week.

He is known in some circles for his first memoir, Soar, Adam Soar, about his son, Adam, who died tragically in 2016, only 22. Born Rebecca Adam, the “tomboy” child battled epilepsy, survived a couple of surgeries, only to drown from a seizure that struck while in a hot tub.

Several of his organs were donated, including his heart, and the recipient — a man from Welland, Ont. — was eventually able to resume long-distance running, a touching story that was widely covered.

It has been an eclectic life, including stints as an usher at Blue Jays and Sens games. Born in 1951, one of six children, Prashaw had a father who was a salesman who spent years of his childhood in an orphanage; his mother had Cape Breton Gaelic roots.

They moved from London to North Bay after Grade 4, a leap that made his mother cry. A long-haired, music-loving Prashaw later studied journalism at Carleton University, worked for the Vancouver Sun and experienced an unexpected calling to the priesthood in 1975.

He judges no Catholic for either staying in the faith, or leaving out of self-preservation or personal conscience.

His story, too, is a tonic for those who, despite a deep, tribal loyalty, feel the church is woefully out of step with the modern, even non-modern, world. No female or married priests, disapproval toward the gay community and yet a scandalous record with clergy behaviour, coupled with a distressing history with, among others, Indigenous peoples, the sexually abused, those seeking to unlock secrets.

Only weeks ago, pray tell, just before mass at a downtown church, there was a pulpit call for more altar servers, but only boys need apply. In 2022, what does one even say about this kind of parsing, beginning in childhood?

Thus, is it easy to believe, as a cradle Catholic, that you’re unworthy, doing many things wrong, or just born the wrong way.

The New Yorker this month quoted the Irish writer Fintan O’Toole thusly on the church’s crumbling hold on that country in the last 70 years — “This, I think, was what really changed: Ordinary Catholics realized that, when it came to lived morality, they were way ahead of their teachers.”

(For more about the book and how to purchase, rickprashaw.com or the city’s independent bookstores.)