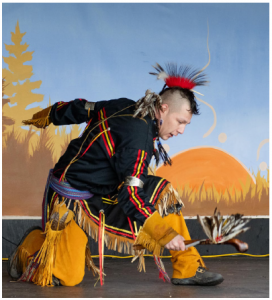 Reconciliation through understanding: Madahoki Farm, a 66-hectare (164-acre) spread in the Greenbelt, provides a safe space for Indigenous communities to reconnect with the land and a place for the rest of us to work toward reconciliation with First Nations people. In addition to its annual Summer Solstice Indigenous Festival, the farm now hosts other seasonal events, including a new March festival this year (dates were not available at the time of writing). The spring celebration is a chance for the public to savour traditional food, browse a farmers’ and makers’ market featuring art and other items and gain a deeper appreciation of Indigenous perspectives through cultural performances and storytelling. At the Reconciliation Rock Station, you can inscribe a message of reconciliation on an orange rock and leave it along one of the farm’s walking trails or take it home. A family affair, the festival at 4420 West Hunt Club Rd. includes small farm animals, activities for children and the farm’s treasured herd of rare and endangered Ojibwe Spirit Horses, which have a sacred connection to the lands of Ontario where their ancestors once roamed. indigenousexperiences.ca

Winter nights in the great outdoors: Cosy, and sometimes downright bracing, winter camping is readily accessible to Ottawans. Gatineau Park offers bring-your-own tent campsites along with rental four-season tents, cabins and yurts that have wood stoves and other features. Parks Ontario also has winter campsites, including one at Silent Lake in Bancroft, about two and a half hours southwest of Ottawa. Silent Lake offers tenting as well as cabins and yurts, heated variously by electricity and woodstoves, and you can fish for lake trout through the ice. No matter where you go, you’ll need to pack winter provisions, normally listed on the websites. You may be able to rent snowshoes and other equipment at the campgrounds if you’re visiting during winter.
Bonus: You can bring your dog to some of the cabins and yurts at Silent Lake. Pets are not permitted in Gatineau Park campgrounds.

Space for reflection: One of the fine things about houses of worship is you needn’t be a believer to enter for a few moments of peace and reflection. The trick is finding an unlocked one other than during services. St. Patrick’s Basilica, a glorious example of 19th-Century Gothic Revival architecture at the corner of Kent and Nepean streets, is open Monday to Saturday from 6 a.m. to 6 p.m. and at various times on Sundays. Designed originally (it underwent subsequent redesigns) by Augustus Laver of the architectural firm Fuller and Laver, which also designed the East and West blocks of the Parliament Buildings, the basilica was a multi-year project, with its cornerstone laid by Sir John A. Macdonald
in 1872. Today, the stencilled ceiling, soaring columns, murals, stained glass windows and bas-relief Stations of the Cross conspire to rejuvenate your addled, 21st-Century brain and put daily concerns in proper perspective. basilica.org
Tip: Remember to visit the basilica’s basement-level Lourdes grotto. Used for occasional masses, and sometimes a place for city-dwellers to vote, it offers its own kind of serenity.

A different kind of church: If physical rather than spiritual ascent is your preference, your winter travel plans could include the short trip to Altitude Gym in Gatineau. Housed in a former church, the indoor, family-friendly climbing centre is geared to clamberers at all levels and offers more than 100 routes, a bouldering area and other vertical challenges. Altitude Gym, which operates a second facility in Kanata (it’s not in a former church), also offers training courses and day camps. altitudegym.ca

Let there be light: The annual Montréal en lumière festival is exactly that — a winter festival where lightheartedness and the glow of the outdoor site at Place des Festivals banish the winter doldrums. The sprawling family event, running from Feb. 17 to 27, spotlights local gastronomy, winter activities and a lineup of indoor shows ranging from flamenco dance and the children’s production Ari Cui Cui and the Magic Skates to an evening with American humorist and author David Sedaris at the plush Place des Arts. Organizers hadn’t released the full schedule at the time of writing, but they promised a new event spotlighting an old sport: skating. Previous festivals have featured attractions such as a Ferris wheel — a fun winter twist on a traditional summer amusement ride — a 110-metre illuminated outdoor slide and a zipline. Back for sure this year is Nuit blanche, traditionally a one-night extravaganza of mostly free cultural events spread over the city. montrealenlumiere.com

The Château Lafayette, which opened in 1849, is older than the City of Ottawa. (Photo: Mark Cooper)

Pickled eggs and music: You can’t keep a good dive bar down. The Château Lafayette — which opened in 1849, making it older than the City of Ottawa — has battled back from the pandemic lockdowns and, when restrictions lift, will feature regular performers such as the consummate singer/songwriter John Carroll (Wednesday nights) and the legendary country music performer Lucky Ron (Saturday afternoons), a tasty selection of local drafts and quarts of beer, and a menu that includes pickled eggs and toasted baguette, hot dog steamé, club sandwiches and deep-fried Jos Louis. Familiarly known as The Laff, this Ottawa institution is at 42 York St. You’ll find more at its website, which includes a proud timeline dating back almost 200 years and some dandy historic photos.

Arts alive: The arts took a brutal hit during the pandemic, but stages and festivals are slowly lighting up again. If you’re looking for a reason to visit Toronto, special arts events may be your ticket. The 20th edition of the Winterfolk Blues & Roots Festival (lineup TBA) runs from Feb. 18 to 20 at several Danforth Avenue sites, including Eastminster United Church. The 21C Music Festival, on until the end of February, features new music by the likes of Kronos Quartet (special guests Tanya Tagaq and Aruna Narayan join the quartet), pianist Eve Egoyan and the Danish String Quartet. A mix of in-person and digital theatre performances comprise this year’s Next Stage Theatre Festival, on until the end of January. From Feb. 16 to 21, the Toronto Black Film Festival will present its 10th annual event, with the lineup unavailable at the time of writing. Closer to home, venues are also open again, including the Great Canadian Theatre Company where The Runner, Christopher Morris’s award-winning thriller set in Israel, plays from Feb. 24 to Mar. 6.

Patrick Langston is an Ottawa writer who’s looking forward to local travel this year in his shiny new-to-him car.