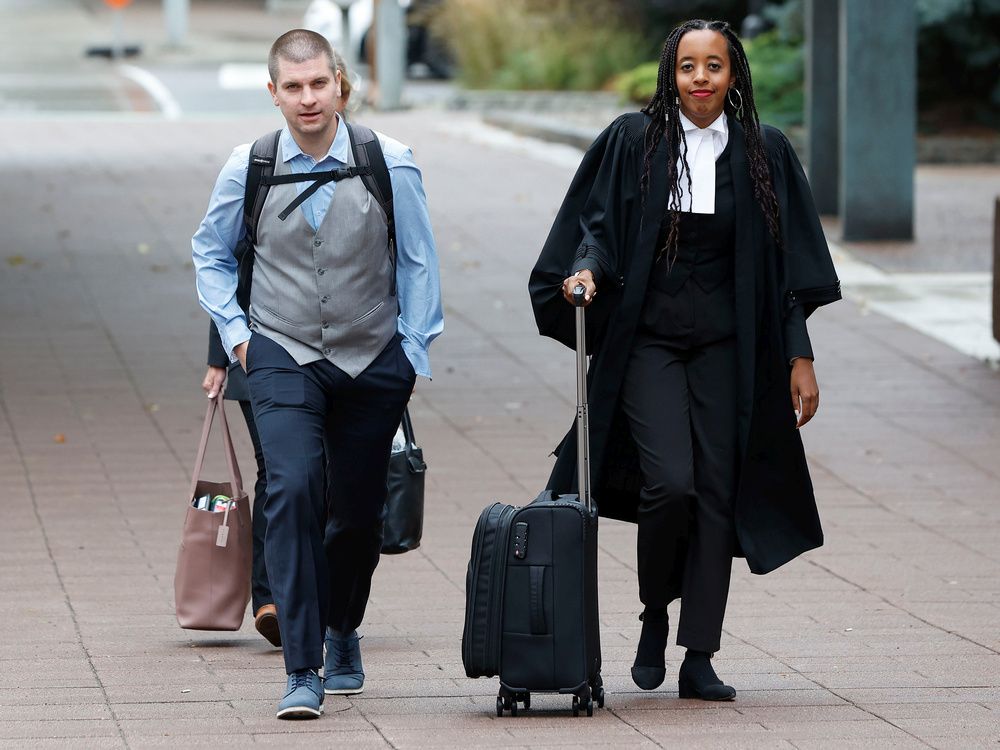 An Ottawa judge has reserved until at least late September a decision in the eviction case against the group that has occupied the former St. Brigid’s church building in Lowertown since the middle of June.

Justice Sally Gomery said she would try to reach a decision soon on the landlord’s application to terminate the lease of The United People of Canada (TUPOC). Her decision is not expected until at least Sept. 27.

TUPOC’s plans to operate an “embassy” at the deconsecrated church on St. Patrick Street have been opposed by some neighbours and others who are upset about the group’s links to the “Freedom Convoy” movement.

The landlords have been trying to evict TUPOC since the middle of August, when they sent a bailiff to tack an eviction notice on the building.

TUPOC director William Komer had signed an agreement to purchase the church building, the rectory used as an artists’ studio and an adjacent two-storey office building for $5.95 million, according to documents filed by the landlords.

The landlords claim TUPOC failed to make a $100,000 deposit by Aug. 10, putting it in breach of the purchase agreement.

But TUPOC does not agree it is in breach of the purchase agreement. Komer has said the group still wants to go ahead with the sale and, in an affidavit, said as of Sept. 1, TUPOC had the $100,000 deposit available in bank drafts for the landlords.

TUPOC had the “sole discretion” to make the purchase agreement null and void, Komer said in his affidavit, arguing that not paying a fully refundable deposit would not prejudice the seller.

In court on Monday, Justice Gomery questioned that claim, saying it would be a “very unusual deal” if only one side had the right to terminate it.

As for the rent, McDonald said in court he had repeatedly asked Komer for rent money he believed was due in mid-June.

The TUPOC director, in an affidavit, agreed he made a rent payment on July 24. But he argued that he had a verbal agreement with McDonald that no rent was to be paid until July 15, and that it could be submitted a bit late.

A snippet was played in court Monday of a recorded conversation between Komer and McDonald from July 5.

TUPOC’s lawyer, Saron Gebresellassi, attempted to introduce an additional audio recording to the court, but Justice Gomery shut that down.

When the eviction hearings began on Sept. 2, Gomery had ordered that audio recordings had to be transcribed and submitted as affidavits. The deadline for submitting affidavits has passed.

“No, I am not going to let you just file this,” Gomery said.

“We have rules here you know. It’s not just flying by the seat of your pants and you can do whatever you want.”

Earlier, Gomery noted that Komer had failed to file a single email or screenshot with his affidavit.

Gomery said the justice system does not allow “trial by ambush.”

Gebresellassi argued that the relationship between TUPOC and the landlords was mutually beneficial since the church building had been vacant.

McDonald had testified that the group operating the church as a community and arts centre had been losing money because COVID-19 had caused operations to close down.

TUPOC and the landlord had a “stable relationship” that continued to evolve, argued Gebresellassi, who also mentioned the community work TUPOC planned to do.

“At the end of the day, it’s a commercial lease,” said Gomery. “Explain to me how, legally, your argument holds up because I’m not getting it.”

Gomery repeatedly asked Gebresellassi when the verbal agreement was made and under what terms.

“There is simply no evidence of an oral lease,” said Gomery.

Deana Sherif said she would continue her protest in the park across the street from St. Brigid’s until TUPOC leaves.

TUPOC says its “embassy” is open to all, however, many of the people who regularly congregate at St. Brigid’s are supporters of the “freedom” movement, which includes a wide assortment of people opposed to COVID-19 vaccines and mandates, public health measures such as the wearing of masks, Prime Minister Justin Trudeau and the Liberal government, and a variety of other causes.

“The company they keep has nothing to do with community building,” argued Sherif.

Gebresellassi, in an interview after the court hearing, said TUPOC is “really important for the country” and that supporters have “put their heart and soul into the embassy.”