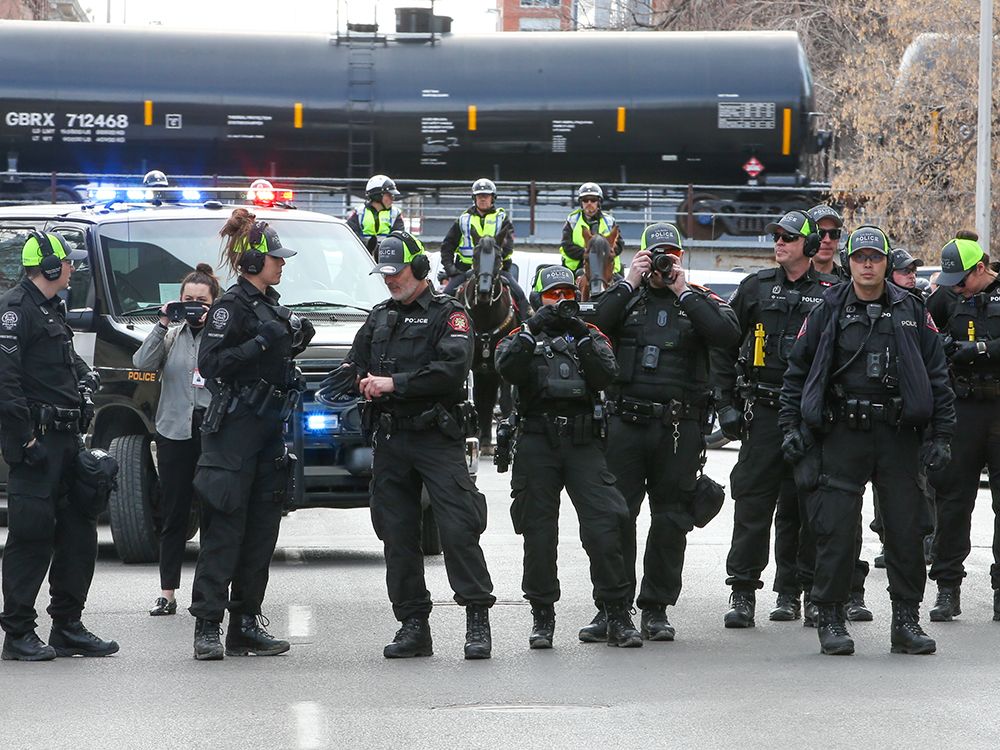 A temporary court injunction meant to curb ongoing disruptive protests in Calgary’s Beltline will remain in effect this weekend, according to city police.

The police service said in a statement it is aware of “several protests” planned in the city’s core this weekend, and that the court injunction issued last week will be in effect and enforceable by arrest.

“If you plan to participate in a protest, it is your responsibility to ensure you are familiar with the order and the related restrictions that are in place,” the Calgary Police Service statement read. The service said it is communicating with protest organizers.

“Our plans are flexible and will adapt depending on crowd dynamics. Officers will be in place this weekend to manage public safety. Temporary road closures and no-stopping or parking zones may be in effect.”

The injunction bars people from blocking traffic, operating vendor stands without a permit in parks, and excessive noise, including horn honking. Last week, police arrested five people at Central Memorial Park for breach of the court order, including one person who faces an additional charge for assaulting a police officer. A sixth protester was arrested on outstanding warrants.

The police action came after many months of so-called freedom protests in the city’s Beltline in opposition to COVID-19 mandates. Alberta lifted nearly all public health rules by the start of March, though some federal restrictions remain in place.

Tensions surrounding the protests heightened in recent weeks, as Beltline residents and community members fed up with the ongoing demonstrations began to take to the streets themselves as counter-protesters, sparking tense and sometimes violent confrontations.

The anti-mandate protesters altered their plans last Saturday, taking their demonstration to city hall and marching down Stephen Avenue, away from their previous route down 17th Avenue S.W.

The group organizing the counter-protests said they’re encouraging Calgarians to go to Central Memorial Park this Saturday, a hub for the anti-mandate rallies, to “read a book” and enjoy what’s forecast to be a sunny spring afternoon.

“We’re doing this to kind of reclaim the space for the neighbourhood and show that these places are nice again,” said Hunter Yaworski with Community Solidarity Calgary.

“We’re happy (that last week) the injunction was ultimately enforced. Regardless, it was an incredibly tense situation the entire time, even though we as counter-protesters weren’t breaking the rules of the injunction.”

Yaworski said his group remains apprehensive of police after officers forcibly rammed their bicycles into counter-protesters two weeks ago, action police Chief Mark Neufeld argued was justified to break up a standoff between the two groups of demonstrators.

A recent Leger poll for Postmedia of 332 Calgarians found 41 per cent of respondents believe that use of force was justified. Men and those over the age of 45 were most likely to believe police were justified in their actions; just more than a quarter of respondents said they weren’t aware of the incident.

Juliet Burgess with the Beltline Neighbourhoods Association said the community group expects police to be proactive in enforcing the injunction and ensuring protesters don’t return to the Beltline.

“The primary issue was not necessarily that they were protesting. It’s the fact it’s been going on so long in the residential areas of the Beltline with no support from CPS,” said Burgess, the group’s social affairs director.

“We’re just really glad they made their way to city hall, which is a more appropriate location, and hopefully this weekend we’re anticipating it will stay that way.”

Last week, the association asked Calgarians to spend time in the Beltline and patronize businesses, something Burgess wants to see again this week.

“It was really cool to have 17th Avenue back lively, and not so full of hatred,” she said.