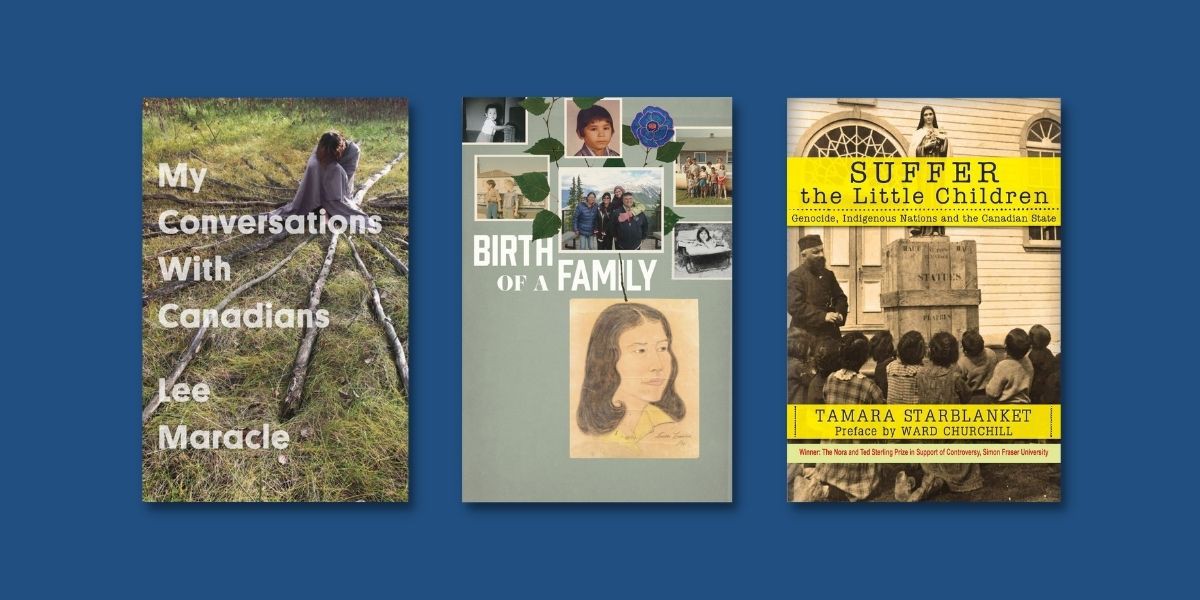 The documentary film and books that I have chosen here are some of the Native-created media that have moved me the most over the years, strongly influencing my thinking, writing, and action. Together, these pieces represent an unflinching critique of colonialism from a perspective where the personal and the political cannot be separated. I return to them now, as times become increasingly difficult and new crises stack on top of old ones.

Tamara Starblanket’s book Suffer the Little Children properly contextualizes residential schools as genocide – an international crime that occurred within an ongoing state project – aiming to destroy the national identities of the Indigenous Peoples whose territories the Canadian state occupies.

This book covers the history of the residential school system itself, the United Nations’ process to define the crime of genocide, and Canada’s objections to the newly established definition. Starblanket also reminds us that Indigenous children in today’s child welfare system experience racist violence like that which previous generations endured in residential schools.

Starblanket is unequivocal regarding both the problem of, and the solution to, colonialism. Self-determination is the way toward recovering Indigenous ways of life, as Starblanket puts it, not “state solutions cloaked in euphemisms and rhetoric such as ‘reconciliation.’”

My Conversations with Canadians (2017)

Maracle died in November of last year, but her last non-fiction book, My Conversations with Canadians, was just as radical and defiant as her early books like Bobbi Lee: Indian Rebel and I Am Woman.

With her impactful and irreplaceable signature style, she engages with numerous subjects such as Vancouver leftist history and Indigenous concepts of ownership and sovereignty.

One of director Tasha Hubbard’s several important documentary films, Birth of a Family is about the first-ever meeting of four Dene siblings, decades after their separation as children in the Sixties Scoop. The siblings had been adopted separately by non-Native families in various locations, including the United States.

“We are intergenerational survivors of the Indian Residential Schools and children of the Sixties Scoop,” wrote Betty Ann Adam, one of the siblings, in an article she wrote for the Saskatoon Star Phoenix about her life experience and the making of the documentary.

Connecting with her siblings for the first time “was a joyful relief, but the enormity of what we’d lost hit me hard,” Betty Ann explained, a feeling that also comes across clearly and powerfully in the film.

Birth of a Family importantly refocuses the narrative of Indigenous political, cultural, and familial disconnection and reconnection on those most affected by it.

This book by Maria Campbell isn’t quite as well known as her 1973 autobiographical work Halfbreed, but it is just as crucial in forming a holistic picture of Métis life in Saskatchewan during the road allowance era. This refers to a time and experience that took shape after the Northwest Resistance of 1885, as Métis people built communities on land designated by the government for roads or highways.

Illustrated with paintings by Sherry Farrell Racette, this book consists of various Elders’ oral stories, shared with permission and presented in their own Métis dialect of English. Many aspects of the road allowance era, from the spiritual to the political, come to life in the pages of Campbell’s book.

As in her earlier children’s book Riel’s People: How the Métis Lived, Campbell provides an important alternative to the previous standard and static accounts of Métis history.

Howard Adams was known for his fiery public speeches and his earlier book Prison of Grass. Yet in his last book, Tortured People, Adams expands on his previous work and also delves into new material. Here he addresses the Zapatistas, the Kanien’kehá:ka resistance during the so-called Oka Crisis, the struggle of Indigenous women’s organizations, and the revival of Indigenous culture through the works of fellow Native writers such as Lee Maracle, Jeannette Armstrong, and Maria Campbell.

“Liberation cannot be achieved through government funding and Aboriginal based capitalism,” he asserted. “We need to shatter the bureaucracy and other capitalist structures that imprison us in colonialism.”

Adams’ steadfast critique of capitalism, imperialism, and the state is more crucial than ever.