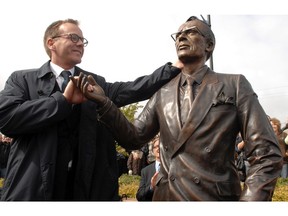 To fans of pop culture, Tommy Douglas is known as the grandfather of actor Kiefer Sutherland. To Canadians, Douglas holds much greater significance. He’s the father of publicly funded health care in Canada. Because of that, many believe he’s one of Canada’s most important historical figures. Thomas Clement Douglas died on this day, Feb. 24, in 1986.

Douglas, the seventh premier of Saskatchewan, introduced the first single-payer, universal health care program in North America in 1961. The program was launched in 1962 and by 1964 a Royal Commission on national health care recommended a Canada-wide adoption of the Saskatchewan system.

After establishing the health care program in Saskatchewan, Douglas went on to lead the then-new federal New Democratic Party, proving to be a powerful force in the House of Commons.  One of his daughters, Shirley Douglas, married actor Donald Sutherland, which is where the Kiefer connection occurs.