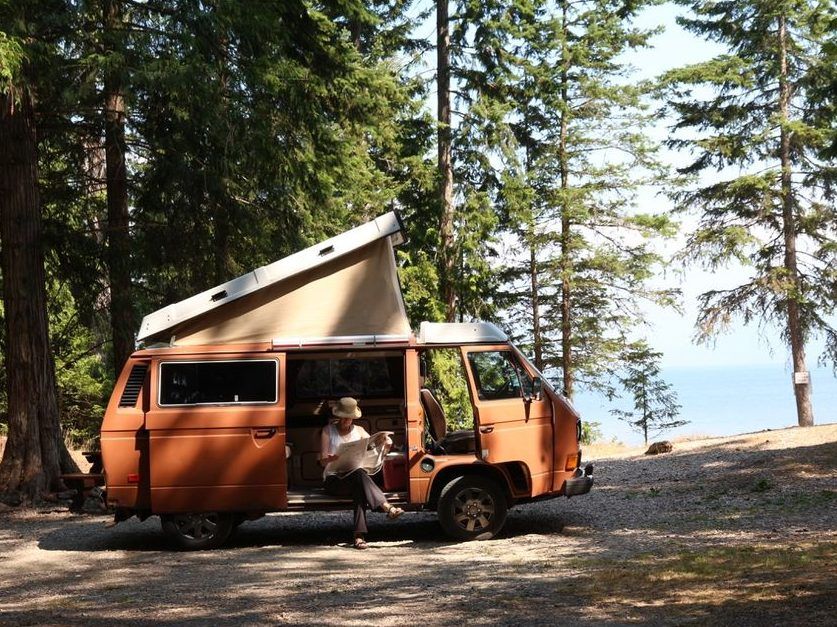 When it’s “spring” according to the calendar but the landscape is brown and dusty, with brave little green shoots regularly pummeled by sleet and snow, only one thing keeps me going.

That’s the thought of taking our Volkswagen camper van on the road. I dream of a long spring and summer spent camping in the mountains, near lakes and alongside rivers, tucked into our cozy mini-RV at night.

The iconic Volkswagen camper van has long been a powerful symbol of freedom, and I am fortunate to have owned not one, but two. My enduring love for them began early.

I was indoctrinated in all things Volkswagen in utero. My dad owned one of Canada’s early Beetles, a shiny black 1958 cutie, and his single-man ride soon became the family car. Some of my earliest memories: that faint crayon-like smell unique to vintage VW upholstery, those enticing buttons on the Blaupunkt radio. Over the years, my parents acquired a string of VWs — a Fastback, a station wagon and two other Beetles — of all which were nicknamed “Schultz.” But never a van.

When I was about six, my staid grandparents, in an uncharacteristic show of wanderlust, bought a VW camper van. It was the stuff of playhouse dreams. The little kitchen! The fold-out bed! The adorable curtains! I was smitten.

As a college student, I inherited a tetchy, green ’73 Super Beetle from my parents and moved in it from B.C. to Alberta, sans block heater. Fast forward to 2009 when we bought a sleek grey Jetta (which, disappointingly, turned out to be a dirty diesel model, another story entirely). Still, I yearned for a VDub van.

Thirteen years ago, my husband and a friend who’d always regretted selling his old Westfalia hit on an idea: buy a VW camper van together and share it between two families, an affordable arrangement befitting this icon of hippiedom.

We sourced a couple of Westies in varying states of decline and one stood out, a burnt-orange 1983 Vanagon, originally from California. It had a few dings and a slightly crumpled rear fender sporting a bumper sticker that quoted Gandhi: “An eye for an eye makes the whole world blind.” Naturally, colourful beads wrapped around the stem of the rearview mirror.

When it was my turn to test-drive the Californian, I gripped her oversized steering wheel, stick-shifted up and down hills and tooted the bleating horn at some kids waving at the van as if it were part of a parade. I breathed in that Volkswagen smell and was home.

We returned the van to the young guy who was selling it on behalf of his parents, who were travelling at the time. I noticed the owner’s name on the registration papers: Bill Phipps. The Very Reverend Dr. William (Bill) Phipps*, beloved minister of the United Church of Canada and legendary social activist?!

Indeed, confirmed the son, adding that his dad wasn’t much of a mechanic, but promising that the van had been well-cared for. Sold.

We happily camped in this “car with good karma” for 11 years, buying out our friend’s share at one point. We loved the pop-up tent top, the two-burner gas stove, the whole perfectly designed configuration resembling a large, ingenious Swiss Army knife.

In the fall of 2020, we decided it was time to let her go. The old girl had never given us much trouble but she was aging, running on just two of her four cylinders. Although she topped 100 km/h on the flats, she gasped up hills.

Selling a Westy is a bit like finding a new home for a cherished family pet, perhaps a long-lived parrot, so we screened our would-be successors carefully. The right person hailed from Rocky Mountain House and his passion was restoring old Volkswagens. He and his family fell hard for our Vanagon and, as they drove away with her, I felt a pang even though I knew she was in excellent hands.

VW camper vans are famous for keeping their value, and we sold ours for far more than we’d paid.

Our van-less state lasted a few months. We tried tenting again (it sucked). We briefly contemplated a trailer (towing felt all wrong). We missed our Westy terribly; nothing else would do. A second hunt began, this time in a pandemic with people desperate for RVs and willing to pay a lot of money for old Westies — us included, apparently.

The online competition for VW campers is fierce but once sellers know you’ve already cared for one it’s like a secret handshake. When our credentials checked out with an owner reluctantly willing to part with her baby, we drove to VDub van nirvana, a.k.a. the Kootenays in B.C. There, we adopted a gleaming white 2006 EuroVan, immaculate inside and out. (When we brought her home for an inspection, our mechanic described her as a “unicorn,” marvelling at her pristine condition.)

The owner shed a few tears as we drove away while promising to always park her safely in a garage. Until things warm up just a little more and those green shoots begin to flourish, that’s where she’ll slumber, waiting to take us on adventures.