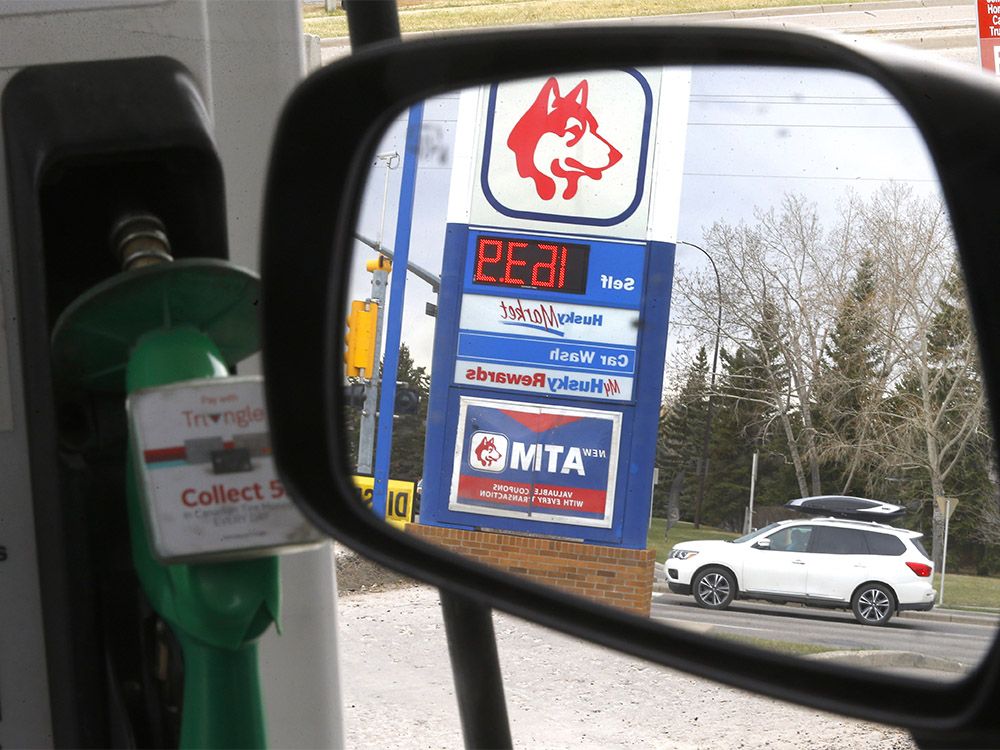 Gas prices are once again on the rise in Alberta as global crude oil markets spike.

Prices at several gas stations in Calgary and within southern Alberta hit 163.9 cents per litre Wednesday, creeping closer to costs seen at the start of April before 13-cent provincial taxes were removed from the pump. With that removal on April 1, prices dropped from around 167.9 cents per litre to approximately 156.9.

University of Calgary economist Trevor Tombe said the average price of gas in Calgary on Wednesday was 163 cents a litre, up from around 155 on Tuesday. He said that bump is not unique to the city or Alberta, as all of Canada is seeing higher gas prices.

Tombe said the higher prices are a reflection of the crude oil market.

“Generically speaking, gas prices move largely because of crude oil price movements,” said Tombe. “That’s the key driver of the ups and downs and, indeed, (Wednesday) we are seeing that oil prices are pretty significantly above (Tuesday) and the day before, so that might be a factor.”

West Texas Intermediate was trading at around $106 a barrel Tuesday afternoon, up from approximately $90 a barrel at the start of April. Tombe said the fact that all of Canada saw a jump Wednesday is another strong indicator that the market is involved.

Gas Buddy, an online tracker of gas prices, showed the cheapest fuel in Vancouver was hovering around 200 cents a litre, while the lowest a Torontonian could expect to pay on Wednesday was 177 cents a litre.

Tombe said that when you compare prices within Alberta to other provinces, it appears that the provincial tax break is continuing to be passed on to consumers, which was a concern among critics at the time the tax break was introduced.

“There is still strong evidence that the gas tax is still being nearly fully passed through to consumers,” said Tombe. “This statistical estimate is that gas prices would have been about a buck sixty-eight (Wednesday) in Alberta if it weren’t for the gas price reduction, and they are actually about a buck fifty-seven on average across the province.”

His analysis shows prices are about 12.8 cents lower than expected if the provincial tax was still in effect.

Meanwhile, natural gas prices are also up in May compared to previous months, with some companies showing prices above $6 per gigajoule in the first few days of the month. That is an increase from prices averaging between $5 and $6 per gigajoule in April, and is the closest rates have come to the $6.50 per gigajoule price protection limit that will come into effect next winter.

The province announced earlier this year that consumers will be protected from any rates above that threshold if prices surge from October 2022 to March 2023.

The government has also promised rebates to Albertans’ electricity bills after the winter months saw increases to power bills across the province. Last week, the government passed a bill allowing for such rebates to occur, and associate minister of natural gas and electricity Dale Nally said he hopes those rebates come to fruition this summer.

“The electricity rebate program will provide $150 to over 1.9 million homes, farms and small businesses to help cover the high costs of electricity this past winter,” Taylor Hides, Nally’s press secretary, said Wednesday. “We anticipate the electricity rebates to start reaching consumer bills this summer, a goal retailers tell us they can accommodate based on their billing capabilities,” said Hides.

Hides said more details on the natural gas protection plan will be announced in the coming weeks. She said the rebates, along with the gas tax relief, would equal $2 billion in savings if in place for a full year.