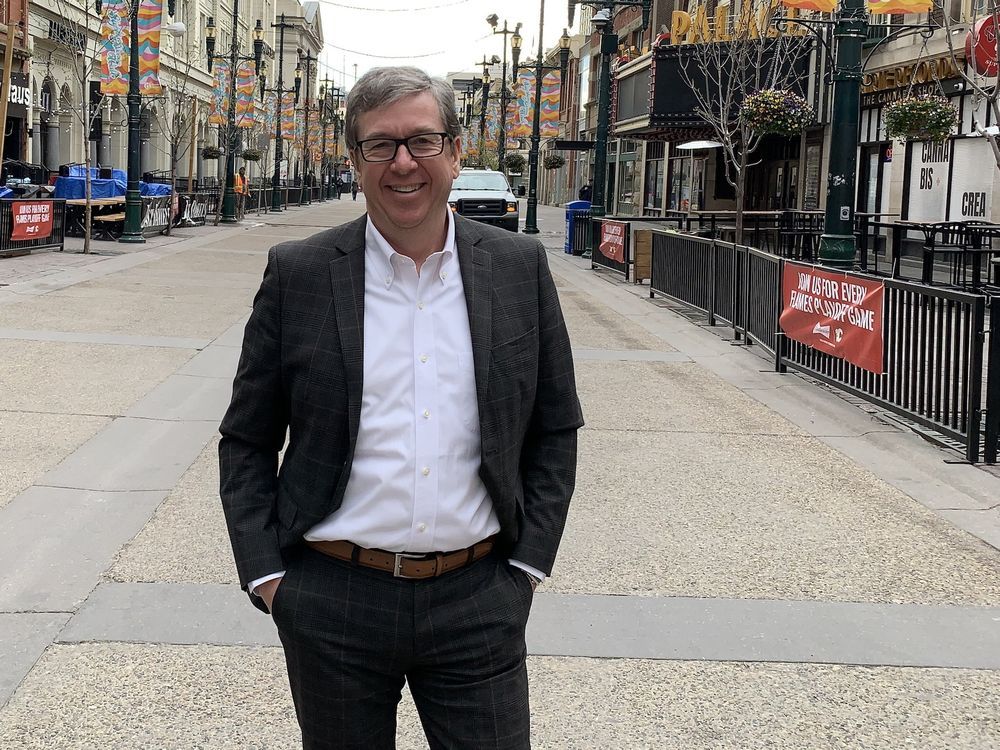 Mark Garner has a vision for the resurgence of Calgary’s downtown and it centres on arts and culture.

The new executive director for the Calgary Downtown Association started on May 9 and has spent his first few weeks diving into the challenges facing the core’s revitalization as well as the area’s strengths.

Every night, though, he is given a reminder of the mountain that needs to be climbed.

“As I sit in both my office and where I’ve landed in the East Village, it’s watching the brake lights going out on Macleod Trail every day,” he said in an interview with Postmedia. “We’ve got to get people back into the downtown core. I think what the biggest challenge is, Calgarians need to rediscover downtown Calgary.”

The issues are many in the downtown and have been a source of debate for years. During the last seven years, however, with the emptying out of office towers, the lack of a 24/7 life in the city’s core has become that much more glaring. Office vacancy rates of more than 30 per cent, with a double-dose of desertion during the pandemic amid restrictions and shutdowns have further devastated the business community and sapped much of the life out of the city’s economic engine.

While there is no silver bullet, Garner looks to the redevelopment of Arts Commons and a vibrant food scene as being a catalyst for the new downtown.

“I will be focusing a lot on arts and culture activations and partnerships within that sector,” he said. “I think that is how Calgarians are going to rediscover the downtown.”

One of his major priorities in creating this vibe will be addressing safety, or perceived safety issues. For Garner, it is an important splitting of hairs and from his early experience in the downtown, it’s more of an issue of the latter.

“I’m walking on a regular basis at 6 a.m., I’m walking late at night to see what’s going on. No issues,” he said. “It’s the perception of safety. When you see people that don’t look like their self — they’re drunk or high or they have mental health and addictions issues or elevated behaviour — you think, ‘Oh my God, it’s not safe.’ But a lot of these people are just in a circumstance.”

Garner comes to Calgary after spending the last 15 years working for regional business organizations in southern Ontario, including the last nine and a half as COO and executive director for the Downtown Yonge Business Improvement Area in Toronto.

He said his intention is not to come to Calgary and force Toronto practices on his new community. Instead, he wants to use his experience as a means to further leverage Calgary’s vision.

The new executive director is one of many who has migrated from larger centres over the last six months to Cowtown.

While he is not leaving his Maple Leaf fandom behind, his compromise will be a Flames and Leafs Doug Gilmour jersey mashup when he goes to games at the Saddledome.

Most of all, he sees an opportunity to make a contribution to change that will last generations, and that excites him. He views revitalization as something attainable for the downtown.

“I like to handle the big hairy problems … I like something that is a challenge and at this point in my career, Calgary is the spot in Canada,” he said. “I get goosebumps just thinking about it. It’s just a wonderful opportunity to be apart of what is happening in this city.”