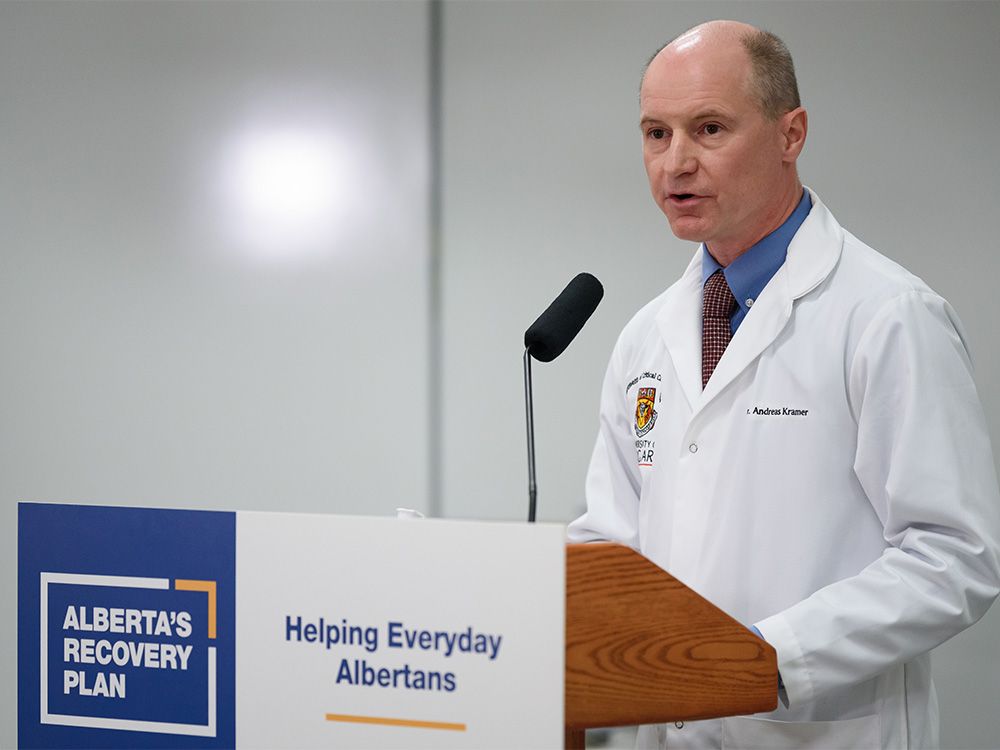 A new provincial effort designating physicians for organ donations seems to be having a positive impact in saving Albertans’ lives, say its proponents.

The three-year, $2-million program that’s recruited 22 physicians to expedite organ and tissue donations is showing promise in finding efficiencies in saving and improving the lives of recipients since its launch in July 2021, a doctor overseeing the program said Monday.

“In the first four or five months of our program at least in southern Alberta, we saw a very clear increment in the number of referrals of potential organ donors and then we saw a 25 per cent increment temporally related with the start of this program in our number of deceased donors,” said Dr. Andreas Kramer, medical director of the Southern Alberta Organ and Tissue Donation Program.

“Whether that’s sustained or not I can’t say right now. I’m very hesitant to measure the success of this program in purely the number of organ donors … because it’s about so much more than that.”

The funding for the Specialist in End-of-Life Care, Neuroprognostication and Donation (SEND) program has trained the 22 physicians to better identify donor opportunities and those that have been missed, said Kramer.

“These physicians serve as consultants to provide second opinions on the prognosis of those (potential donors) with brain injury … as consultants about donor eligibility,” he said.

“We want to maximize the gift, so we want to recover and transplant as many organs as possible and of course we want those organs to then also function well in the recipients.”

Feedback and auditing of the practice under SEND to ensure more usable organs are donated will make Alberta “the Canadian leaders in doing this because the medical record reviews will actually be done by experts rather than people with a little less understanding.”

Those physicians are on call at all times with six of them operating in Calgary — a product of a private member’s bill spearheaded by High River MLA R.J. Sigurdson.

“The SEND program and combination with key components from Bill 205 bring an exponential positive impact towards tissue and organ donation that will ultimately reduce wait times for organ and tissue donations and help save lives,” said Sigurdson, who added his own family has confronted kidney disease.

The advent of SEND has also coincided with a record year for organ transplants in the province, with the southern Alberta program seeing 105 transplants in 2021 compared to the previous high number of 101 in 2017.

An emotional Shannon Viczko said she hopes the stepped-up effort and the gift given by her daughter Sloane will inspire more Albertans to donate their organs and tissue.

Shortly before her death by traumatic brain injury in 2016, seven-year-old Sloane had insisted her organs be donated.

The girl became the first pediatric donation after circulatory death (DCD) organ donor in Alberta in a procedure at the Alberta Children’s Hospital in May 2016.

“I want Sloane’s story to light you on fire, to stretch you beyond your truths and limits,” said Viczko.

“Let’s normalize this conversation in our schools, our communities and most importantly our homes.”

Despite the recent progress in boosting Alberta’s organ donation numbers, the province has lagged behind other parts of Canada, with 16.8 donors per million in 2020 compared to 21.3 dpm in Ontario and 21 dpm in B.C.

But Alberta did succeed in continuing much of its kidney and liver donor-transplant activity during the pandemic while other provinces pulled back, said Kramer.

“We actually forged ahead when other provinces closed down their programs,” he said.

Albertans wanting to make an organ and tissue donor can register their consent at ultimategiftalberta.ca or in person at an Alberta registry office.