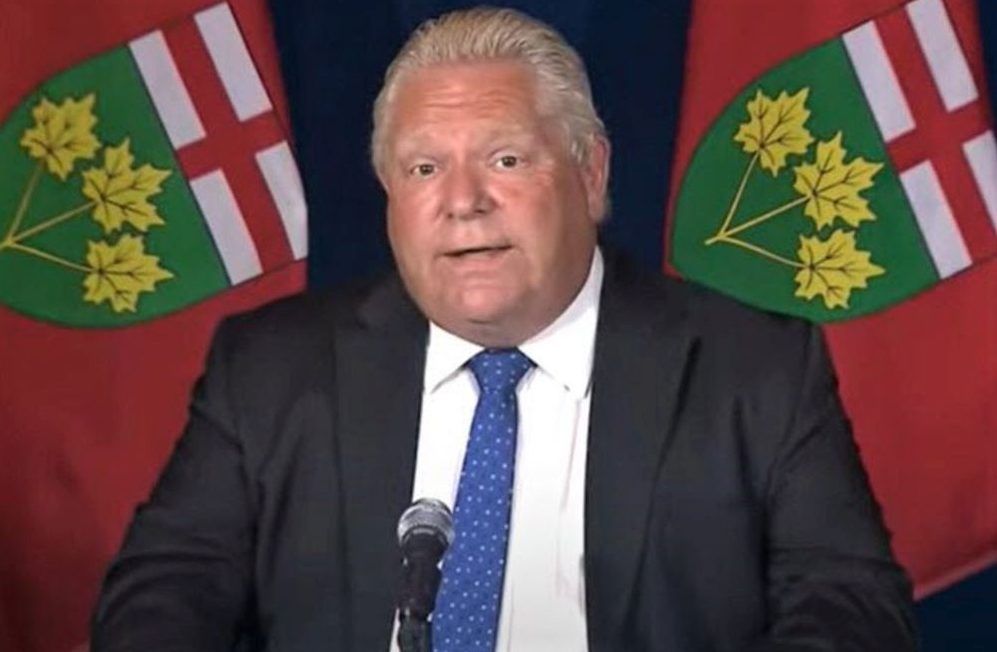 Premier Doug Ford said Thursday he would like to see mask mandates continue on transit, in hospitals and other high-risk locations in Ontario, but he is optimistic the current wave of the pandemic might have peaked based on wastewater data.

Both the premier and Health Minister Christine Elliott also repeated Thursday that Ontario’s hospital system has the capacity to handle any increase in cases related to the current pandemic wave.

That was the message the province’s Chief Medical Officer of Health gave to local public health officials who met with him late Wednesday to ask the province to take more action, such as mask mandates in schools, to reduce high rates of COVID-19 transmission across the province. The provincial government removed most pandemic restrictions last month and says there is no need to reinstate them.

In a statement, Ministry of Health spokesperson Alexandra Hilkene said science table modelling showing that hospital an ICU capacity will be lower than the previous wave, confirms that “Ontario has the tools and capacity to manage this wave of COVID-19 without imposing additional public health measures or reinstating a mask mandate.”

But Ontario’s COVID-19 Science Advisory Table and local public health officials are less optimistic that the worst of Wave 6 of the pandemic is over or that the health system has the capacity to handle it.

Tyson Graber, co-lead investigator of the COVID-19 wastewater project in Ottawa and associate scientist at the CHEO Research Institute, said it is too soon to say whether wastewater has peaked, especially with a holiday weekend coming up.

“I wouldn’t say this was a clear and present peak given the lack of public protections and increase in social activity,” he said. “Expect the wastewater signal in Ottawa and other parts of Ontario to be volatile in the coming days.”

In modelling released Thursday, the science table said hospital occupancy is expected to continue to rise for some time “with uncertainty in the timing and the height of the peak.” The science table also noted that infections in health-care workers are already as high as they were during the January Omicron wave when hospitals postponed some surgeries and procedures. Some hospitals in the province have struggled to deal with so many people off due to COVID-19 in recent days, as have schools and other businesses.

Ahead of the Easter weekend, Ford encouraged people to use common sense and to wear a mask indoors in crowds.

“I encourage everyone to be cautious when you are in a crowded room. Yes, put your mask on.” He added doing so is “up to each individual person.”

Some medical officers of health asked the province to go further, including reinstating mask mandates in schools. This week, the Ottawa Carleton District School Board acted on its own to bring back mandatory masking in classes, effective immediately.

But Cushman, who was among those asking the province to reintroduce some restrictions, said the real concern is with the labour force, because so many people are off sick or isolating right now.

“All of the hospitals are pulling their hair out right now in terms of how to maintain adequate staffing. It is one thing to say there is (hospital) capacity with beds, but another to say whether you have the staff.”

Cushman said medical officers of health expressed major concerns at Wednesday’s meeting, but “it is fair to said Dr. Moore’s office had strong rationale for not doing more at this point because things are looking very optimistic.”

Cushman said he would have liked to see masking reintroduced in school boards in Renfrew County but local boards were not confident of their ability to do so.

Health law expert Jacob Shelley, meanwhile, said it is a dereliction of duty for boards of health not to take action to prevent spread of COVID-19 during a pandemic and hospitalizations should not be the metric used to measure severity of the situation. Long covid, he noted, is expected to affect a large number of people infected.

On Thursday, Shelley, who is co-director of the Health Ethics, Law & Policy Lab at Western, sent a letter to Ottawa’s health board saying it is not doing its duty to prevent the spread of infectious disease and should take action under the province’s Health Protection and Promotion Act, no matter what the province does.

In the letter to Ottawa’s board of health, he warned that failure to act could result in legal liability.

“It is the duty of the board of health to ensure the prevention of disease and the ultimate responsibility for failure to protect the health of the residents of this health unit will fall on this body.”