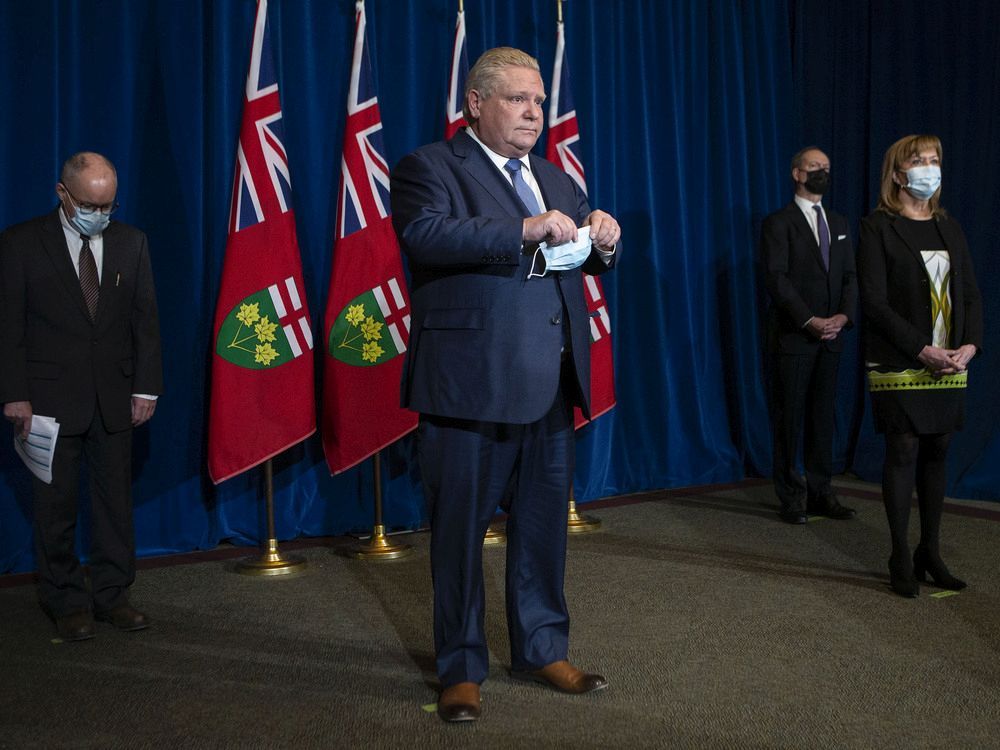 If the handling of the COVID-19 pandemic is the No. 1 issue in the Ontario election, then voters don’t seem to be socially distancing from Progressive Conservative leader Doug Ford — yet.

Ford and the PCs entered the election with a sizeable lead in the polls, although recent polling suggests the race may already be tightening.

But Andrew Enns, who’s overseeing election polling for Leger, says Ford is in pretty good shape. “When I look at the voters and I see Premier Ford sitting in a pretty good position, I’m not sure the voters want to dwell on the past record,” Enns said.

“I don’t see a great appetite for that. There’s still a pretty sizeable portion of the population that thinks (the Conservatives) did the best they could.”

Ontario Conservatives entered the 2018 election still reeling from an internecine leadership struggle that nearly tore the party apart. Doug Ford was still relatively unknown outside Toronto, where he served on city council, developing a reputation as a score-settling pitbull alongside his famous (or infamous) kid brother, Rob.

Four years later, few politicians in the country have as high a profile as Ford. In the early stages of the pandemic, at least, he appeared on TV almost daily to give voters a folksy COVID-19 update, often alongside his leadership rival, Christine Elliott, deputy premier and minister of health.

There were many missteps. The pandemic exposed the appalling conditions in many of Ontario’s long-term care and retirement homes, the province’s vaccine rollout was chaotic, and an underfunded health-care system was strained to the breaking point.

In 2020, Ford famously encouraged people to travel on March Break holidays just days before declaring a state of emergency and shutting down schools. After issuing a stay-at-home order, Ford skipped off for a holiday at his Muskoka cottage.

“If you’d asked me a year ago, I would have thought this election would be a referendum on Doug Ford and Doug Ford’s leadership,” said Jonathan Mallow, a political scientist at Carleton University. “But it doesn’t seem to be about that. Doug Ford seems to have grown into the premiership. A lot of people have opinions about him, but there doesn’t seem to be that really sharp division that we had, for example, with Steven Harper or even Justin Trudeau.

“People who didn’t like Doug Ford in the first place, don’t like the way he handled the pandemic. But what’s really interesting is how Doug Ford has kept his party together compared that to the dumpster fire in Alberta.”

Still, issues that dogged the Conservatives in their first two years of power continue to fester. As the pandemic eases, parents angry about Ontario’s autism program are again demonstrating outside MPPs’ offices.

“When the pandemic hit, it silenced us,” said Kerry Monaghan, a mother of two children with autism. “That was incredibly frustrating. And the government continues to use the pandemic as an excuse for the lack of movement on the file.”

She says the government is spending money on autism, but providing no help to families navigating the system.

“The program that Ford put forward is one that downloads the onus on to families to seek out the care their children need in the name of ‘parental choice,’” Monaghan said. “Yes, the parents should be in the drivers’ seat, but they shouldn’t be alone in the car.”

Then there was the province’s handling of the three-week long occupation of downtown Ottawa by demonstrators protesting the federal government’s vaccine mandate. When Ottawa Mayor Jim Watson and former police chief Peter Sloly pleaded for outside help, they were met with mostly silence from Queen’s Park even though Lisa MacLeod (Nepean) and Merrilee Fullerton (Kanata-Carleton) sit in Ford’s cabinet.

“A big issue on the minds of Ottawa voters is the occupation,” Ottawa political commentator Greg MacEachern said. “The federal government can be criticized for coming in late, but, when they did come in, they solved it.

“All voters are going to ask the question: ‘Who helped us? And who was invisible?’” MacEachern said.

“We have two cabinet ministers in this town, and you would never know it.”

In rural areas, some farmers want curbs on conservation authorities and their ability to designate protected lands.

“The conservation authority will come to your property and say, ‘There’s two acres that are wetlands and we’re going to regulate that. You can’t do anything with it,’” said Jeff Bogaert, president of the Ontario Landowners Association. “And there’s no compensation for it of any kind for the loss of use of the property or the loss of value of the property. That’s a significant issue here that’s not being addressed by any government.”

Teachers unions are angry about the strain caused by the province’s hybrid learning system, while the Ontario Nurses Association continues its regular demonstrations over what its president, Catherine Hoy, calls the “unravelling” of Ontario’s health-care system.

Even so, Ford and the Conservatives maintain a seven-point lead over the Liberals, according to the latest Leger poll. Ontario PCs ranked first among respondents with 36 per cent support, the Liberals came in second with 29 per cent, and the NDP had 25 per cent support.

“I guess the story in 2018 was the rise of Ford and the freefall of the Liberals,” Enns said in an April interview. “But, if you look at this election, you have a very different dynamic.”

The Ontario election is June 2.