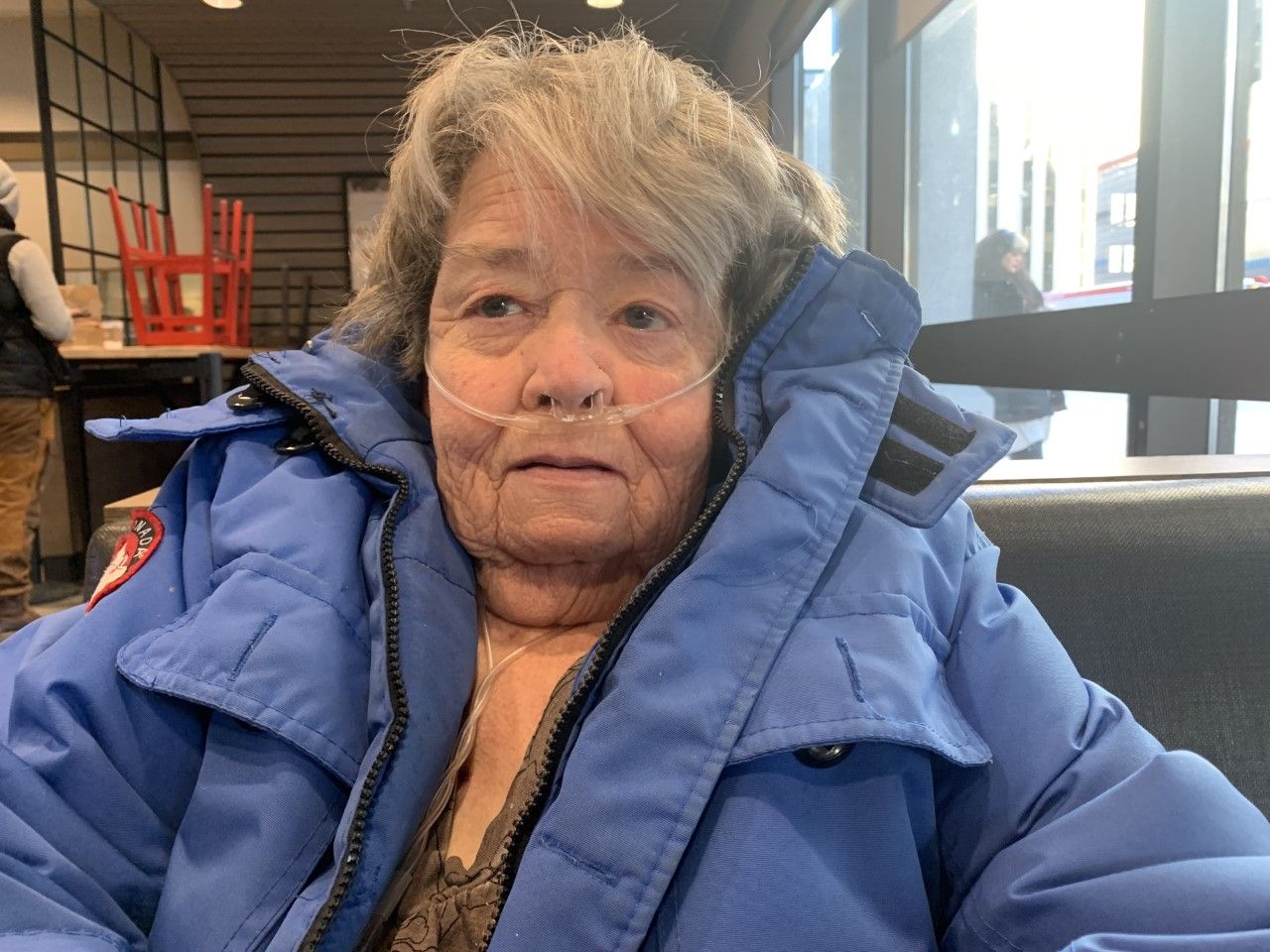 Hooked up to an oxygen tank, a weary Birdie Schwieger said she doesn’t know where she’ll call home, a week after a harrowing evacuation from the flooded Westview Heights apartment building.

The 66-year-old is one of hundreds of residents of the downtown building whose hotel payments funded by her landlord ran out Wednesday.

“I don’t know what’s going on — somehow we’ve got to come up with (hotel money),” said the walker-equipped Schwieger, who was seeking refuge from the -20 C chill Wednesday in a downtown Tim Hortons restaurant.

When pipes burst and the power failed in the building at 825 8th Ave. S.W. due to the cold, Schwieger was hauled down multiple flights of stairs to safety.

“I went down the stairs in a chair in pitch dark — it was scary,” she said.

Also scary, say her neighbours, is facing the uncertainty of where they’ll find shelter from the freezing cold once they can no longer afford the hotel rooms previously paid for by Westview Heights owner Mayflower Ventures.

“I don’t have family to help me — I start school in January and I have no home,” said Laura Montague, 18.

“I’m going to try to gather some people together to stay at an Airbnb or something.”

A happy New Year isn’t a likelihood, said the teen, who moved into Westview three months ago on a one-year lease.

“I don’t have the money to do anything fun,” said Montague, who was in tears after retrieving belongings from her 30th-floor suite.

She and other residents said their landlord should continue to pay for their lodging, using their insurance if need be.

“But they don’t care about us, all they care about is money,” said Schwieger.

Residents said they’d been told by their landlord they’d be back home by Friday but it’s now clear that won’t happen.

Ajay Nehru said given the damage to the 297-suite building caused by the freeze-up that followed the flood, he can’t set a date for that return.

“Our efforts have to be to try to get the building up and running,” said Nehru of Mayflower Ventures.

“Crews have been working basically non-stop since the event happened.”

He said the intense cold and Christmas holidays that have reduced the availability of repair personnel have conspired against both the building owner and tenants.

“If this had happened during the summer, it wouldn’t be an issue,” said Nehru, adding power, heating, sprinklers and elevators all have to be made workable.

“We started heating up the building (on Tuesday).”

And he defended his company’s treatment of residents, who were put up in several nearby hotels for three to six nights at Mayflower’s expense.

“We were clear with them that this was a short-time arrangement they could use to make arrangements with their insurance companies — it’s something that can’t go on indefinitely,” said Nehru.

“This is where we need the community to step up.”

“It’s been a struggle the whole way — most of the people in this building are low income, the disabled, students, teenagers who are terrified,” said Keyowski, who estimates about 400 people have been displaced.

“They don’t know what to do, they don’t have money.”

She said that while she’s staying at the nearby Sandman Inn for now, her future is uncertain and noted some residents have even discussed the prospect of heading to a homeless shelter.

“I’m in limbo — (the landlords) aren’t doing anything for us,” said Keywoski.

“I’m one of the luckier ones, at least I have a credit card.”

Residents also say they resent Mayflower’s demand they pay rent ranging from $900 to $1,300 for January, especially given there’s no date for when they’ll be able to return.

An email sent to residents by Mayflower on Tuesday says their evacuation time will be deducted from that rent payment, which be processed on Jan. 10.

Montague said that’s still “ridiculous” and given the damage to the building, she has doubts she’ll return.