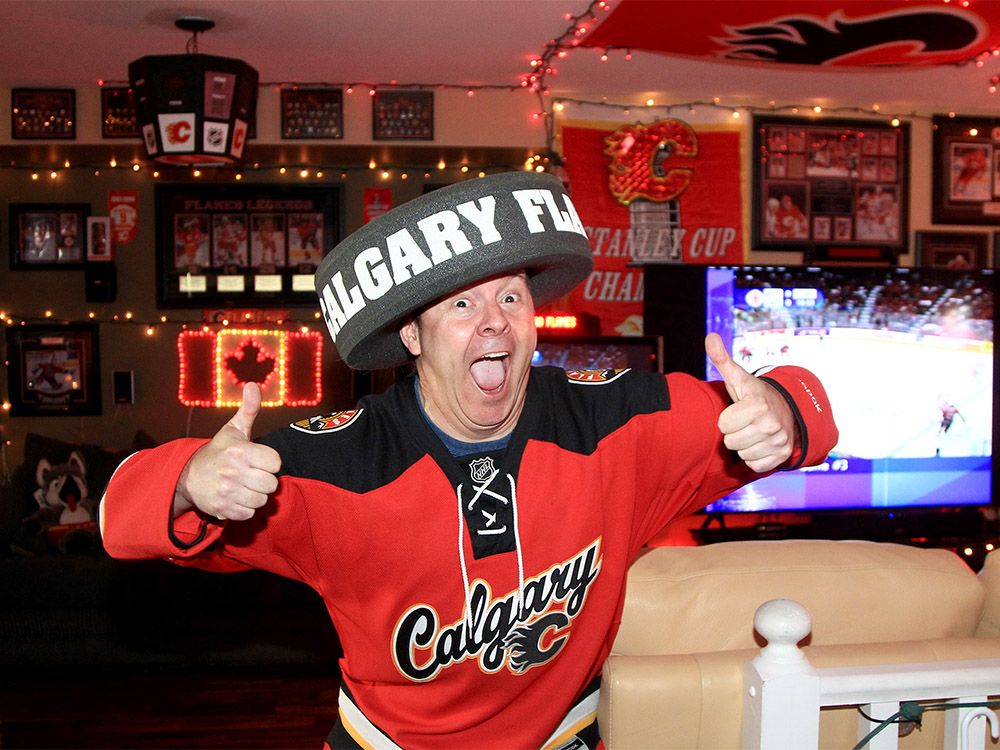 Dean McCord figures if you can’t be at the Saddledome for the playoffs, you might as well have the next best thing.

McCord has built what he believes is the ultimate Flames man cave in his living room.

“I normally tell everyone, if you can’t be at the Dome, then this is the place you want to be to watch the game,” he said the morning after Game 1, when the Flames shut out the Dallas Stars 1-0.

The room is set up with three couches plus some Flames-branded bar stools. It’s filled with Flames memorabilia and has multiple TV screens, including an 82-inch monster for the main viewing experience. There’s also a TV in the kitchen so you don’t miss a thing if you’re grabbing a beverage.

But that’s just the start of it.

“The light show is probably what gets everyone,” said McCord. “Everything is wired up by remote.”

Whenever the Flames score, McCord has his hands on the remote, ready to set off the room’s flashing lights, plus looped cassette tapes which play songs such as “Burn Baby Burn.”

Guests are also treated to the sound of the Saddledome’s goal horn. McCord said a friend was able to get him a copy of the same digital file that is played at the Saddledome every time a goal is scored.

He said his self-activated goal alarm is faster than the internet-connected goal horn that was offered up by a certain beer company a few years ago.

“I’m pretty good on the trigger,” he said. “Mine is not delayed.”

Max Berg is a regular at McCord’s house for hockey nights. He said he goes over a lot, but the living room never fails to impress him.

“The first time I saw it, I was blown away. It was just incredible,” he said.

Berg grew up in Regina as the son of a die-hard Flames fan from Calgary, and now they’re his team, too.

“I’m just so excited about this season,” he said. “It’s probably the most excited I’ve been.”

He said he’s looking forward to watching the playoffs, preferring the atmosphere at McCord’s home to a bar or pub.

“It’s never been a bad group of people,” said Berg. “Everyone I’ve met who has come to Dean’s place has always been so nice and so easy to talk to.”

Among the more unusual memorabilia is a poster of McCord wearing a Flames jersey and holding the Stanley Cup. He said it was made for him by Market Mall when he was a finalist in the 2008 Bring Home The Cup contest.

That contest would have had the Stanley Cup delivered to Calgary for a day by Mark Messier. Unfortunately, McCord didn’t win, but he did get to keep the poster.

He’s expecting to host larger and larger groups as the playoffs go on. It could be standing room only as the team progresses. That will mean introducing more and more friends to his man cave and its many traditions, like the post-goal song.

“Of course, at the end of the game, Ring of Fire has to play,” said McCord. “That’s on another tape deck hidden away.”