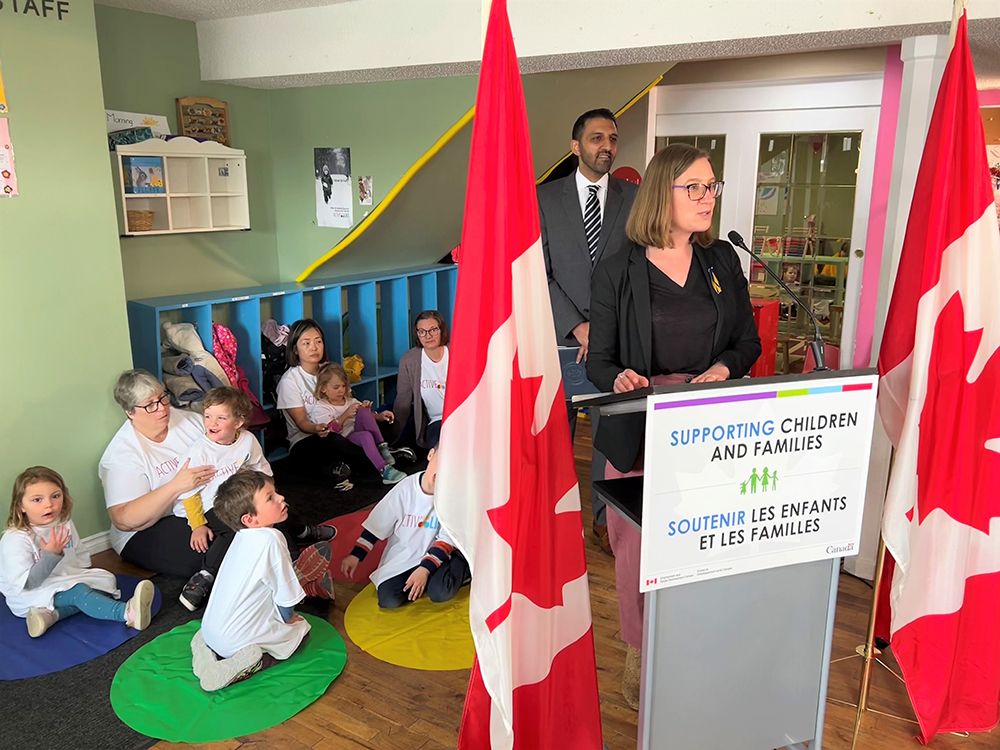 A nationwide non-profit program aimed at promoting children’s physical literacy will receive a $428,303 boost from the federal government over the next two years.

Karina Gould, the federal minister for families, children and social development, announced the grant from a Cochrane daycare on Friday.

“So I’m really excited about the work that Active For Life is going to be doing to enable kids to be healthy, active citizens for the rest of their lives.”

Active for Life, operating with the tagline “Raising physically literate kids,” is intended to provide parents, early childhood educators and other caregivers with free resources and guidance on raising active children. It’s a program of B2ten, a national non-profit that markets a “business-based approach” to facilitating success among amateur and elite Canadian athletes.

“We know that every parent and every educator understands that children need to move to be healthy, but we also know that many parents and many educators do not feel confident or competent in getting their child or children moving,” said Richard Monette, spokesman for the project.

“We provide (parents and educators) free resources and support to help them understand that getting children to move every day is actually easy and simple, like it used to be when we were kids.”

The funding will primarily be directed toward expanding the program’s internet-based resources.

“This is all evidence-based, this is all scientifically-researched and the work that they’re doing that they’re going to be promoting across Canada is really about that early childhood development, and creating those healthy, active habits throughout life,” Gould said.

“I can say as a parent of a four-year-old, the big difference for when my kid is running around all day and playing and how easy it is to go to sleep versus a day where he has not been doing that.”

The minister made the announcement from the Future Stars Daycare, which had taken part in a smaller federally-funded pilot of Active For Life’s programming. The announcement followed one made by the minister Tuesday of $2.6 million in funding to GRIT, a non-profit facilitating education for children with developmental disabilities.

Both grants are through the $100 million Early Learning and Child Care Innovation Program fund. Meant to be distributed over ten years beginning in 2018, it’s intended to fund programming, availability and affordability in Canadian childcare.

The minister also fielded questions on how a planned reduction of childcare fees nationwide will be overseen.

“We have asked each province and territory to put forward a two-year action plan, and the reason why we did a two-year action plan is because this was completely new. We’ve never done this before, we’re building a whole new system, and so we want to be able to track progress, adjust as needed, be able to iron out any bumps that come up along the way, and work really collaboratively and in cooperation with the province or territory.”

The federal government says fees will be reduced by an average of 50 per cent by year-end and to an average of $10 per day by 2025 or 2026, as per agreements signed with the provinces and territories.

“There are a lot of mechanisms built in, but what I think is really exciting about this is there’s a huge opportunity for the public or stakeholders to be involved in the creation of this new federal system that I think is going to be really transformative for our country.”