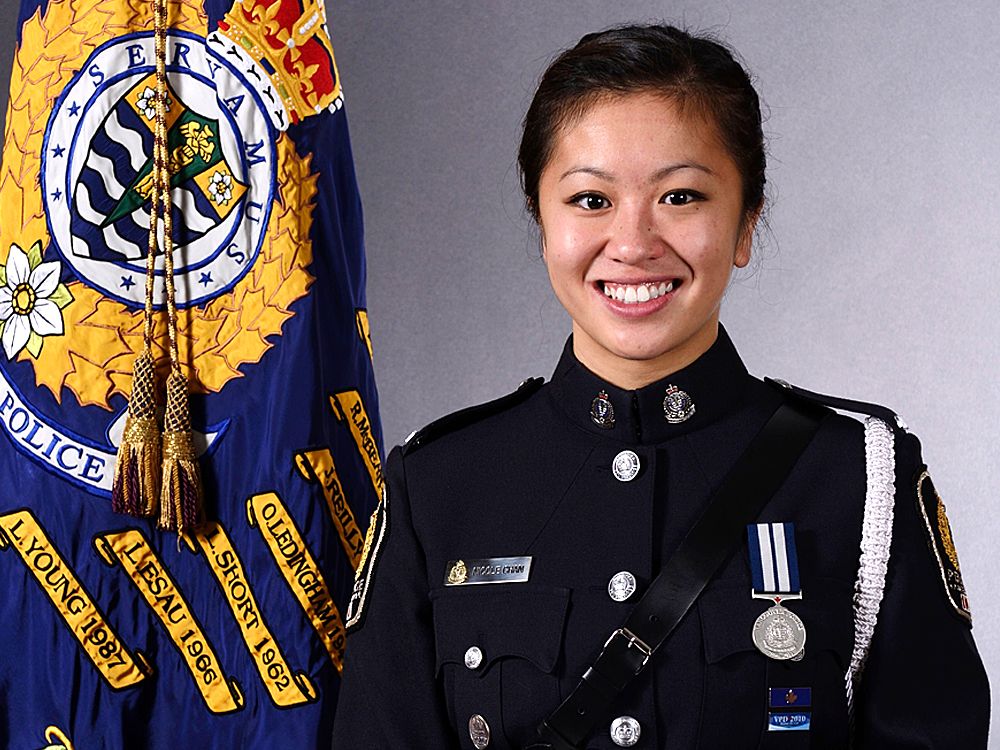 Nicole Chan died by suicide in January 2019 after nine years with the VPD.

The family of a former Vancouver cop who took her own life after intimate relationships with senior officers is suing the city, the B.C. government, the Vancouver Police Department, board and union, and the officers.

Nicole Chan died by suicide in January 2019 after nine years with the VPD.

An investigation by the Office of the Police Complaint Commissioner determined Sgt. David Van Patten had an inappropriate relationship with Chan while serving as a human resources officer for the department. Van Patten was dismissed a year after Chan’s death for discreditable conduct.

Another officer, Sgt. Greg McCullough, was handed a 15-day suspension in 2018 after a relationship with Chan, despite “knowing that (Chan) was in a vulnerable state mentally and emotionally,” according to the complaint commission. McCullough has since resigned from the VPD.

The civil suit claims Van Patten and other officers sexually harassed, sexually assaulted and intimidated Chan using their rank while she was employed as a junior officer. It also says the VPD, board and union failed to create a safe working culture and policies that allowed the “culpable conduct” of the officers against Chan to continue for years.

According to the suit, Chan and McCullough started a relationship in 2015 despite both being married to other people. McCullough allegedly didn’t tell his superiors about the relationship and urged Chan to do the same.

In early 2016, Chan met Van Patten when she applied for a new position within the VPD. While the application was unsuccessful, Van Patten began to text and flirt with Chan until he pressed her into an intimate relationship during a work trip. He too failed to tell the employer and urged Chan to keep it secret, according to the lawsuit.

“Van Patten knew, or ought to have known, that Nicole was (a) vulnerable person with a recent history of mental distress related to intimate relationships among other triggers,” reads the suit, which notes Van Patten was the human resources officer handling Chan’s file when she went to her supervisors about her deteriorating mental health.

Van Patten is accused of threatening Chan with evidence of her prior relationship with McCullough, with whom he had become friends, by exposing the relationship to both their spouses. He demanded to continue his sexual relationship with Chan in exchange for not telling Chan’s husband or McCullough’s wife.

The suit also claims the department didn’t have adequate policies to protect vulnerable officers like Chan from exploitation by their superiors.

The plaintiffs, who include Chan’s mother, are seeking damages including loss of enjoyment of life and income support, psychiatric injury and “nervous shock.” It claims “Nicole’s suicide was caused or contributed to by the defendants.”

Jenn Chan, who filed the claim on behalf of her sister’s estate, has told Postmedia that her sister complained to the police chief in 2017 about inappropriate relationships with the two senior officers. She was put on stress leave, and an internal investigation into the two other officers was launched.

Jenn Chan said she believed the officers’ conduct played a role in Nicole’s deteriorating mental state, sense of self and self-worth, which ultimately led to her taking her own life.

The lawsuit was filed in January but only came to light recently. No response has been filed and none of the claims have been proven in court.

— With a file from Tiffany Crawford