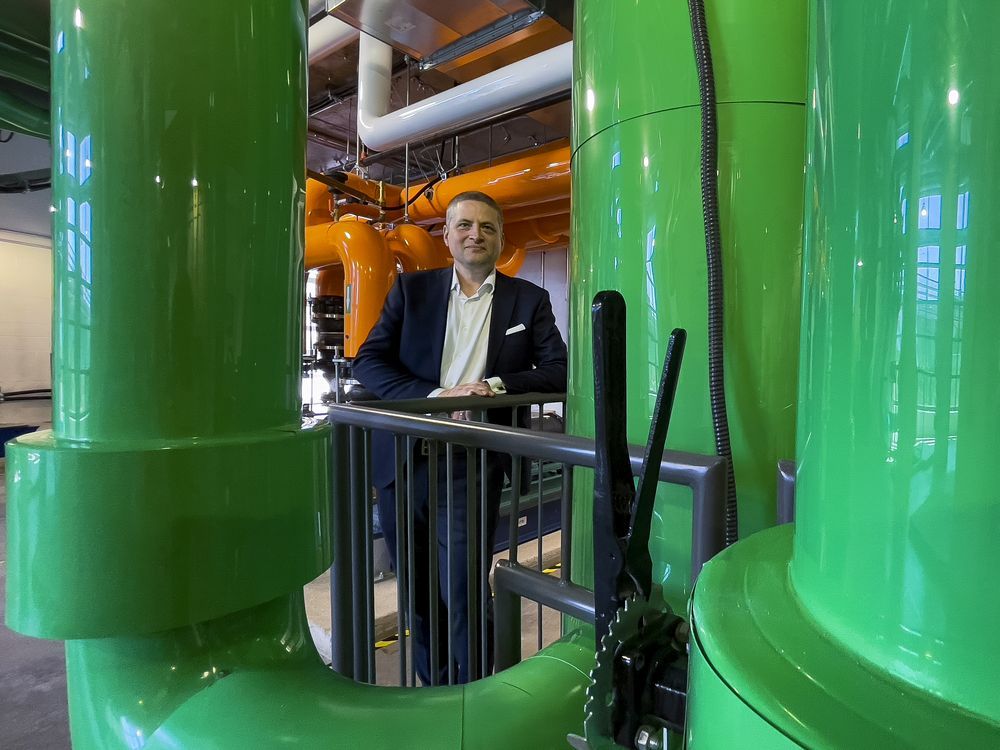 The company behind a major new community on the Ottawa River inaugurated on Tuesday its carbon-neutral heating system for the development, celebrating the project with industry partners and local politicians.

Speaking to a crowd of press and workers behind the Kruger Products plant in Gatineau, Zibi president Scott Demark heralded the environmental impact of the kilometres-long system of pipes and pumps.

“At Zibi, we will be able to avoid using 144 kilotons of carbon emissions a year, the equivalent of 1,000 cars,” he said, applauding the intergovernmental collaboration that led to the project’s completion.

Zibi is a riverside community that will eventually have 44 different buildings on either side of the Ottawa River. It currently has three operational buildings but will eventually serve thousands of people. The community covers 34 acres and all of its heating and cooling systems will be fueled through the use of wastewater from the Kruger Products plant.

Politicians from both sides of the river were present at the announcement, which began with a ceremony by Peter Decontie, an elder in the Kitigan Zibi Anishinabeg First Nation. Ottawa Mayor Jim Watson commended the collaborative process behind the project and mentioned that the Ottawa Public Library is also targeting a zero-emissions strategy.

“This will set an important precedent,” said Hull-Aylmer MP Greg Fergus, speaking to the crowd in French. “It will have a durable and positive effect on our environment.”

The Zibi utility project is a collaboration between Zibi, Kruger Products, Hydro Ottawa, Hydro Quebec, the Federation of Canadian Municipalities and the cities of Gatineau and Ottawa.

Kruger Products is a tissue manufacturer that employs hundreds of people in the Ottawa-Gatineau area. As part of its tissue-making process, the plant creates an incredible amount of heated water. The Zibi community utility then utilizes a heat transfer process to either warm the buildings in its community during the winter or cool them in the summer through the use of a refrigerant.

It takes advantage of close-by Ottawa River water during the process, but does not mix fluids, and never releases river water at anything higher or lower than 6.6 degrees Celcius from the waterway’s natural temperature. The entire system involves no combustion and uses the byproduct of an industrial process that’s fueled by natural gas and electricity.

The partnership that made the project possible began with a 2013 land deal. Since then, the Zibi community utility has received many environmental grants from sources like Hydro Quebec and Natural Resources Canada. So far, Zibi has three operational buildings: one condo, one residential rental building and an office building. The company expects to complete the Quebec portion in 10 years and the Ontario side in six.

Zibi was designed by a team of engineers from Equinox Engineering Ltd. Demark said that the team is amazing and that it’s really the way that the community uses pre-existing technology that makes it so innovative.

“People always ask me if this is some kind of breakthrough technology,” he said. “No, the answer is no. The thing here is that we use the technology in a more intelligent way.”

Some of the hardest aspects of the project, he said, were the institutional barriers presented by working across different governments and with different sources of funding. That being said, he is hopeful that this project could inspire similar sustainability efforts across the country.

Toronto Western Hospital is developing a similar heat-transfer system, which uses raw wastewater from the city’s sewage system rather than post-industrial waste from a factory.

“This is all entirely possible for others,” Demark said, smiling. “There’s wastewater all over.”