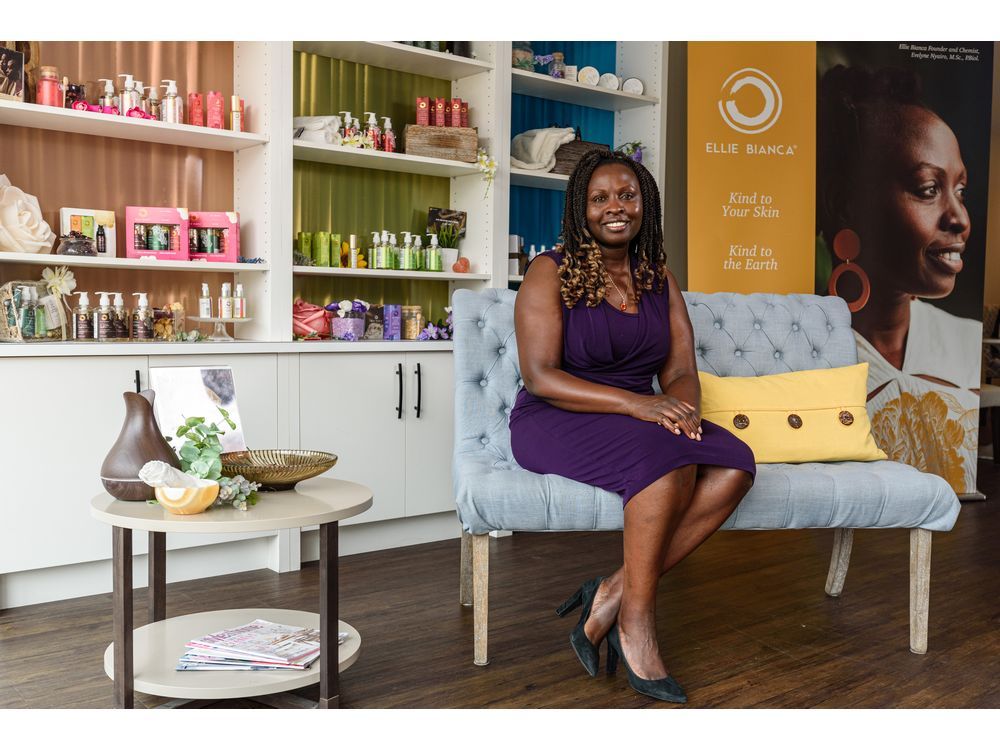 Raised in a rural village in Kisii in southwest Kenya, Evelyne Nyairo developed a fondness for Edmonton while visiting a niece. She enrolled in King’s University in the Alberta city and earned her BSc in environmental studies/ biology at the Christian university.

Today, Nyairo is based in Calgary and runs her own company, Ellie Bianca, that produces and sells an all-natural, environmentally sustainable and socially conscious skin-care line in more than 500 stores across the country.

After graduation she joined a company that transferred her to Calgary, where she joined Golder Associates working on oilsands projects.

In 2008, Nyairo started her own AB EnviroSolutions company and was awarded worldwide consultancy projects, including one supported by the World Bank that sent her back to Africa for more than a year to work on a project in the Central African Republic of Chad.

While there, she became concerned about the status of women in that country. She — although the owner of her own company — was always addressed as an assistant. But after buying 25 cent mangoes from women and children who did all the work and being told that she had to hand the money over to the father as a mark of respect — although he had never lifted a finger or even acknowledged her existence — she felt she must do something to empower those women.

Nyairo brought back a bottle of shea butter, extracted from shea tree nuts that has been used as a cosmetic ingredient for centuries. With it she began creating formulas for Ellie Bianca and in 2015 had brought to market her first skin-care products — built on the pillars of “Kind to Your Skin, Kind to the Earth, Kind to Women.”

The women of Central Africa benefit because her raw materials are purchased by a strong, in-country woman who buys direct from women. Most of it is then shipped to a laboratory in Belgium where the oils are extracted before being shipped to her lab in Calgary.

Today, Ellie Bianca has a staff of five here working in R&D, five support staff involved in in-store demonstrations, and also makes use of a government laboratory in Edmonton.

Sales began at a stall in the Sunnyside Market but progressed to the Canadian Health Food Association trade show, where her cosmetics caught the eye of a vice-president of Whole Foods who offered to carry them in its stores. Today, they can be found in many major retailers, such as Hudson’s Bay, Safeway, Co-op, Sobeys, Blush Lane and Nature’s Fair.

An energetic marketer, Nyairo is also enjoying a brisk trade providing private label products for companies wishing to promote their own brands.

Her success enabled her to create the Ellie Bianca Foundation that offers financial support to single mothers to enrol and graduate from post-secondary studies, and gives support to boys and girls in Kenya where 20 young people helped by the foundation have graduated from university.

Nyairo has worked hard to realize her dream of running her own company, combining her love of science with her passion to empower women, success that earned her recognition with an RBC Canadian Women Entrepreneurship Award.

And she is still involved in her AB EnviroSolutions company that will take her away for a month’s work in Egypt in May on a World Bank audit contract for a U.S. oil company project.

The California Wine Experience is back, allowing us to enjoy 400 premium wines from 100 of California’s top producers while supporting Safe Haven Foundation. The event will be held April 27 at The Hudson on the sixth floor of the downtown Hudson Bay — though always a sellout, only 250 tickets will be available this year. Proceeds from the event will help ensure Safe Haven Foundation can continue its mission to “help give Calgary’s homeless and at-risk girls their future back.”

David Parker appears regularly in the Herald. Read his columns online at calgaryherald.com/business. He can be reached at 403-830-4622 or by email at info@davidparker.ca.