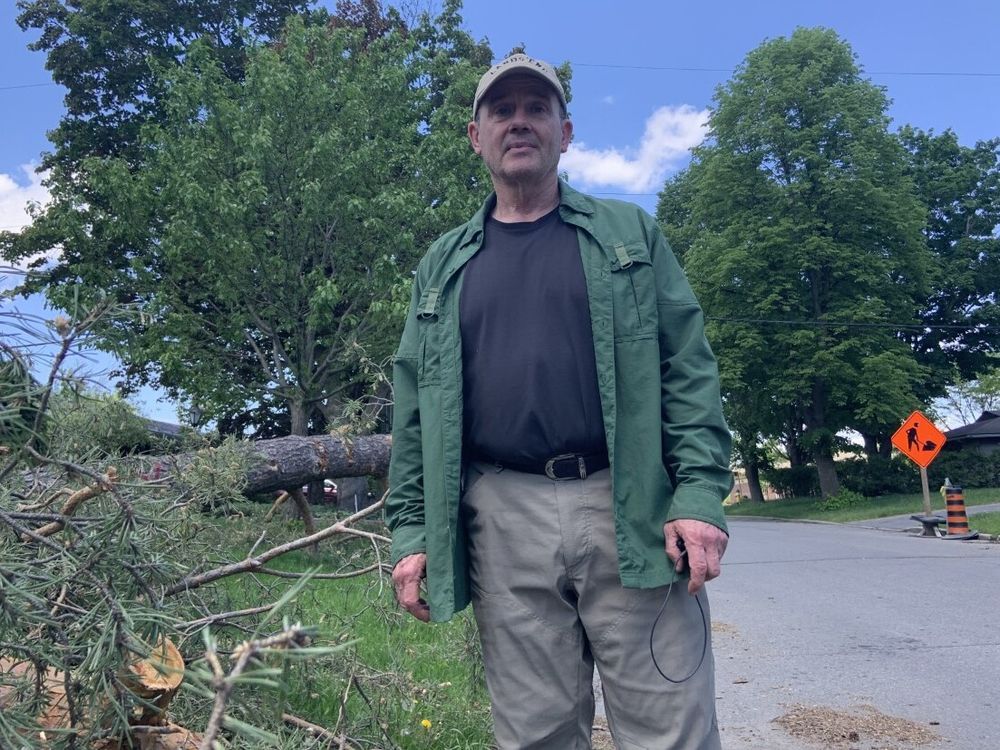 The hum of generators and the buzz of chainsaws filled the air in a pocket of Riverside Park South on Sunday as crews and residents tackled the cleanup from last weekend’s storm amid a power outage that had stretched more than eight long days.

About 1,100 homes spread out in three pockets of the neighbourhood south of Walkley Road were among those still to be reconnected to the power grid on Sunday. Hydro Ottawa said that power was back on for 94 per cent of its blacked out customers, but there were still 9,900 Ottawa households without power as of Sunday afternoon.

Residents in the neighbourhood share the frustrations of many of those who lost power — spoiled food that had to be pitched into a dumpster, and a lack of internet, refrigeration and hot water. Sump pumps without power, resulting in wet basements, meals that had to be planned without refrigeration.

“We’ve been doing a lot of takeout,” said resident Erika Scrivens. “It’s costing a lot of money. I’m finding it really hard to stay on top of the groceries with three kids.”

Residents on the streets around Fielding Drive were relieved Sunday when hydro crews and arborists arrived in the neighbourhood to clear hydro lines. But they were also frustrated at how long it had taken. And there was still no clear indication of when they could flick a switch and get back to their normal lives.

Resident Sean Kelly said a neighbour with a chainsaw quickly cleared a tree that had toppled on Rankin Street after the May 21 storm, creating just enough room for a car to pass through.

“And it stayed like that until Tuesday,” he said. “I’m not surprised that nobody came to assess the neighbourhood because it was so hard to get in and around.”

He has no idea when power will be back.

“It seems that every day Ottawa has come up with a list of neighbourhoods that it’s working on. And this neighbourhood was never on the list,” said Kelly. “I understand that Hydro was targeting the low-hanging fruit because that would get the greatest number of people back online. But it was frustrating.”

Coun. Riley Brockington said his office has never been so busy as it has been since the storm knocked out power and toppled trees across River ward.

“The volume of emails, calls and tweets was something we had never seen before,” he said.

People were looking for basic information, including estimates of when homes on their street would be reconnected. They were disappointed not to get it, said Brockington.

“There is a lack of information at the local level. People want to know if they should buy a generator or go stay with relatives. For those who live in the small pockets, it’s frustrating. They have no timelines. They feel abandoned and ignored.”

But many of those who have lived without power for eight days have been counting their blessings that they have had help from neighbours and friends — and that the outage came at time when there was no extreme cold or heat.

“We have been fortunate with our circle of friends. They’ve been giving us hot meals and hot showers,” said Hélène Long. “My kids have had a lot of play dates. My oldest has been saying, ‘I wish this lasts forever.’ ”

Seeing neighbours come together to help one another has been wonderful, said Scrivens.

“We have always been a tight-knit community. In the future, looking back, I’ll probably remember those things more than having to throw out our entire refrigerator and freezer (contents).”

Kelly was also looking on the bright side. “At least it’s not the middle of winter, like it was with the ice storm where you have to worry about the freezing pipes and freezing to death and carbon monoxide poisoning.”

Brockington plans to ask questions about keeping neighbourhoods informed on a local level when Hydro Ottawa’s response to the storm is reviewed. He also want to know what investments will have to be made to protect the grid as extreme weather events become more frequent.

“I’m very concerned as our climate changes, as winters warm up and we get more freezing rain,” he said. “I will have a lot to say.”