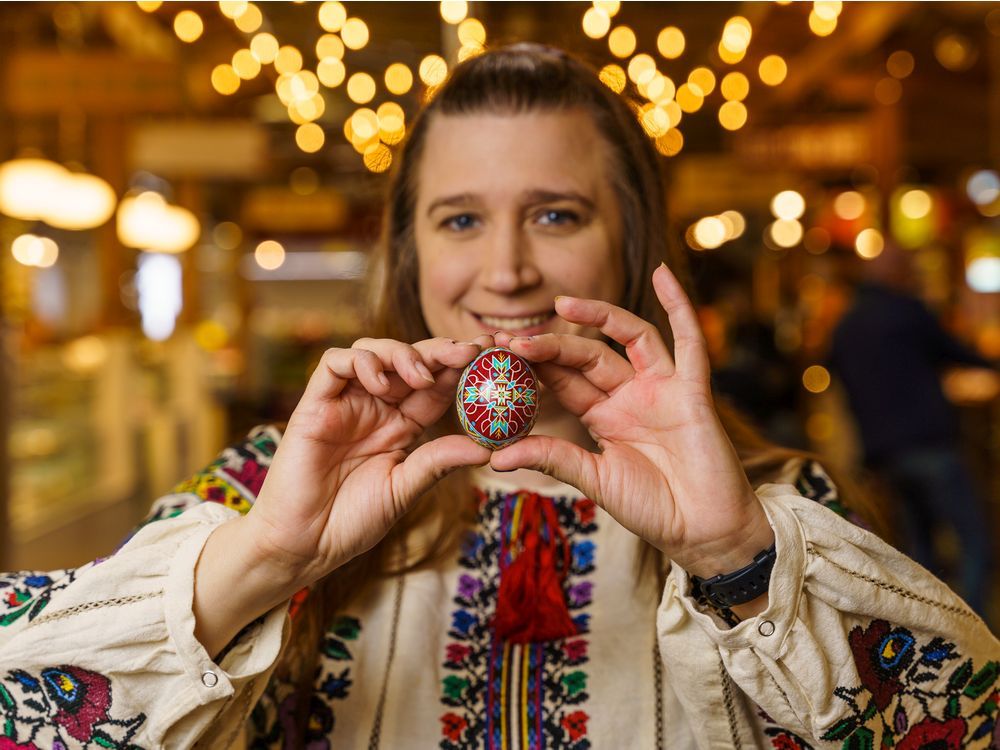 This Easter, decorated eggs are holding extra meaning for Calgary-Ukrainian artists looking to assist those displaced by the ongoing conflict in Europe.

Cathy Reitz is one of several Calgary artists known for creating Pysanky eggs, who are using their art to raise funds and spread awareness regarding the Russian invasion of Ukraine. She is helping to organize a raffle with 25 egg-themed prizes that will raise funds for Ukrainian refugees stuck at the Polish border as well as those that have made their way to Canada. They will also use the funds to assist Ukrainian hospitals.

“Ukrainian culture is built on symbolism,” said Reitz. “So your eggs are blessed every Easter and the egg that you bring to get blessed has either, has something for good wealth, good health, fertility, harvest, things like that are a very old tradition.”

Pysanky eggs are cleaned out before artists use layers of melted, dyed beeswax to create colourful patterns. Alberta is home to one of the largest Pysanka eggs in the world. Vegreville is home to the aluminum egg that was built in dedication to the RCMP centennial and is a nod to the large Ukrainian community in the area.

The eggs have a long history in Ukraine dating back to before Christianity took root in the eastern European country.

Daena Diduck, paints Pysanky eggs in Calgary and puts on local demonstrations, she said the eggs origins are traced back to the legend of an evil monster named Pekun who spread evil throughout the world. One day the monster became enraged and broke a Pysanka egg being written by a young girl that transformed into chains and transported the monster to a cave. The legend goes on to say each year Pekun sends his minions out into the world to report on whether Pysnakas are still being created, if they are not his chains will loosen.

“The more Pysnaka we do, the tighter the chains,” said Diduck. “If we stopped doing eggs, evil will get released. So we’ve been writing collectively as a group on Facebook since 2014.”

Diduck said that when Ukraine was under Soviet rule, people were forced to write Pysanka messages in secret to keep the tradition alive.

While both artists have been creating eggs for most of their lives, this year, Diduck and Reitz said the eggs hold special meaning in the face of Russian aggression.

“We’re doing it with love and for peace and for hope,” said Diduck.

Diduck said she went to Ukraine several years ago and the tour guides she went with are now guiding the media through the war. She also knows other Pysanka artists who remain in Ukraine, with one fighting on the frontlines. The local fundraiser is her way of helping her friends.

“At the start of the conflict, which is now the war, we wanted to find a way to hope in a way and to kind of spread the word as well as deal with what was going on,” said Diduck.

Reitz, who has been creating Pysanka since she was eight years old, said watching the conflict from afar has been heartbreaking, seeing places she has visited reduced to rubble.  She said she has friends who remain in the country.

“I was there in 2018, so to see kind of what’s happening and some of the places I’ve been are really destroyed is just, it’s heartbreaking and almost sick to your stomach because it’s such a peaceful democratic nation,” said Reitz.

The fundraiser is a prize raffle with 25 prized including decorated eggs, Easter baskets as well as jewelry made with the eggs. Tickets will be sold for $20 each online with 1,000 tickets available. Winners will be drawn at the end of April.

The grand prize has a geometrical star-based design with gold, red, purple and blue throughout it.

Reitz said learning to create Pysnaky takes a long time but that anyone can do it and that she has recently held workshops to pass on the art form.

“if you’re interested in learning, you know, reach out and we’ll tell you how to do it,”