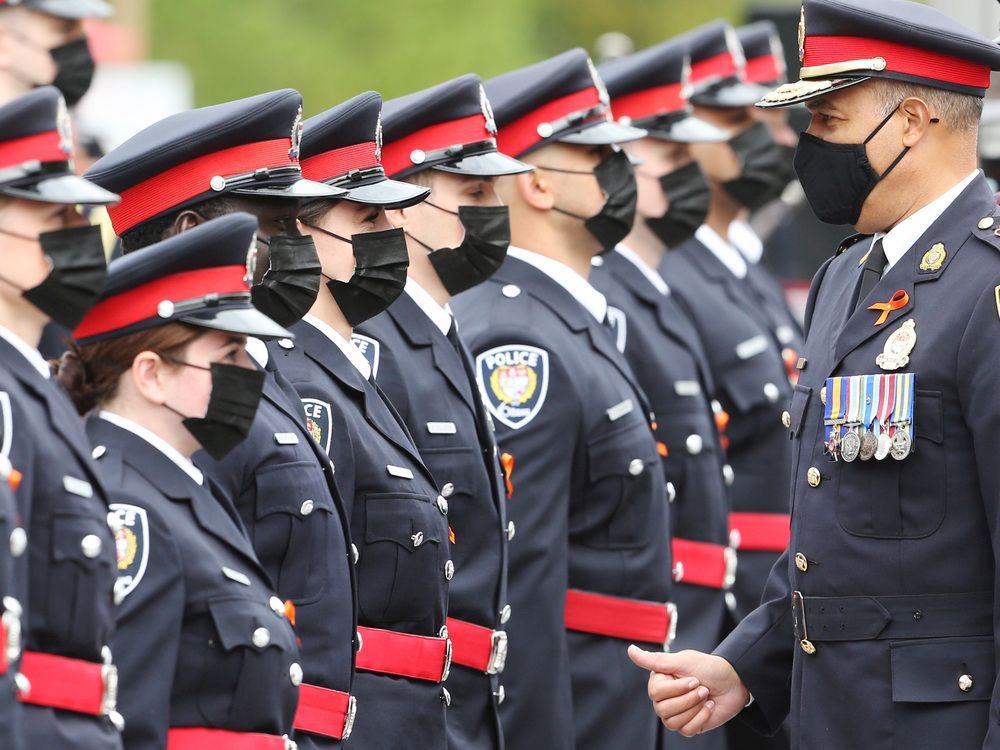 Linda Duxbury has studied workplace issues in policing for about 20 years.

Here’s what the Carleton University professor said one day this week. “It’s a tough job and I don’t understand why anyone would want to be a cop right now.”

In casual conversation, they are described as overpaid, invisible, or under-employed traffic wavers. How could they not be coloured a deep blue?

What prompted the discussion with Duxbury was a story from our legal affairs writer, Aedan Helmer, about the arrest of two men suspected in a gun-point robbery in which a victim was stabbed in the leg.

When an officer arrived on scene at a Kanata business park, he fairly quickly spied a pair of possible suspects and saw them toss a bag into a car, possibly the marijuana in a drug rip-off.

The officer, court was told, took the keys from the suspect’s hand, found the weed and a sawed-off rifle in the car, which also contained a bloody knife. Though this was clearly a highly-volatile situation — were there other guns, say? — the officer brought about a peaceful arrest.

Does this not sound like an excellent piece of work, for which officers get commendations?

Instead, a defence lawyer is arguing his client’s charter rights were breached because, at the right moment, the accused wasn’t given the proper cautions or told about the right to counsel, thus the evidence should be tossed. (Rights? What about the right to not get stabbed?)

Well, a judge will decide. The point, today, is police officers are criticized coming and going: for trying to do their jobs in split-second conditions or visibly not doing them at all. And much of it caught on camera, maybe broadcast out of context.

Duxbury, for one, says it takes a toll on the profession’s image.

“The job of the police officer and how it’s viewed by the public, especially in bigger communities, has really deteriorated over time.”

Perhaps not in Ottawa, but in other jurisdictions, it is having an affect on recruitment.

A couple of years ago, the U.S.-based International Association of Chiefs of Police published a report calling it a “crisis for law enforcement” as nearly 80 per cent of agencies were having trouble attracting qualified candidates. (The reasons were many, not just the perceived pitfalls of the job.)

Duxbury said the surveys done by her research team have found the top “stressor” for officers is — not fear of getting shot or hurt — but “multiple, ever-changing Number One job priorities without the resources to back it up.”

Surveys have found 60 per cent (and higher) of officers complain of work and responsibility “overload.” Police forces, says Duxbury, are among employers in the “greedy organization” category, meaning that work is first, everything else second.

Look at the three-week trucker blockade, she said. Leaves were outright cancelled; senior officers barely left the command centre, seven days a week, and this after a two-year pandemic. And in what other profession are you expected to be repeatedly yelled at, taunted, yet maintain a professional composure?

Interim Police Chief Steve Bell says Ottawa’s applicant numbers have been healthy, in the 600-plus range annually until 2020 when, with the removal of some barriers (like fees), the number shot up beyond 2,000. The days of just opening the floodgates to applicants is over, he added, and an OPS team actively seeks out the right kind of candidate, with an eye on diversity.

“There isn’t a chief in Canada who doesn’t need to pay close attention to recruiting and I can tell you it’s one of my major areas of focus,” Bell said Tuesday.

Today’s candidates, he explained, need to be interested in community building, be compassionate, understand the complexity of the law and be willing to step into potentially dangerous situations.

Strangely enough, he said the last 72 hours of the convoy blockade were an opportunity for the public, via television, to see how a professional police force conducts itself in defusing a volatile situation with little physical injury.

“And you know, it’s an incredible job. You get to go and help people every single day.”

And won’t they walk a line — never thick, always thin.