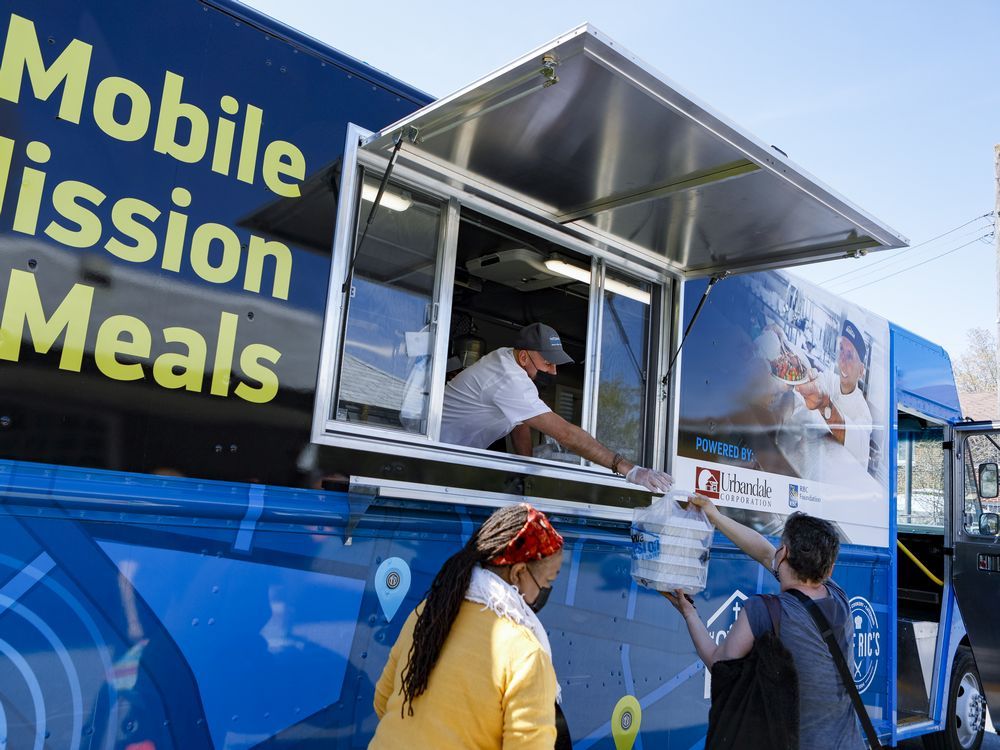 Our daily bread was once a mere menu thought — now it’s a costed worry, maybe an outright prayer.

So it occurs in Tuesday’s brilliant sunshine as the Ottawa Mission’s No. 2 food truck pulls into a church parking lot on Prince Albert Street in east-end Overbrook. The line is there already — it may be the best meal they get all day, “all week” one woman ventured.

On foot, on bicycles, holding Mom’s hand, in a stroller or, like Hélène Choiniére, 60, in an electric wheelchair.

“This service is really important for me,” she said, clutching a bag with four prepared meals.

“I come because I don’t get enough money to supply me with food all month. My neighbour is in a wheelchair too, so I grab a couple for him.”

So, money is tight? “More than tight.” She is also a long-hauler with COVID and, in outings to the grocery store, is distressed at rising prices — up about six to eight per cent overall this year, higher on many items, the biggest spike in about 30 years.

When the pandemic struck, there was no food truck at the Mission shelter, which used to serve mostly in the Waller Street dining room. Then came one, on loan, dispensing 500 meals a week to five communities. Now there are two trucks, 31 communities (rotating basis), seven-day service and an astounding output of 7,000 meals a week.

Unlike a food bank, these are hot, prepared meals, ready to eat. Monday was chicken burgers, salad and mashed potatoes; Tuesday was grilled chicken, mixed vegetables and rice.

Mission chef Ric Watson is on the truck today, helping dispense some 200 meals at this location, the Seventh Day Adventist Church, which also has its own monthly food bank and clothing depot. Watson sees the rising cost of food first-hand, as his new stand-alone kitchen on Rideau Street churns out meals by the thousands while it trains new workers.

He’s usually on a truck at least once a week. “I’ve been at the Mission for 20 years and I never realized how bad the food insecurity was until the pandemic hit.”

So there was George Buchanan, 54, on Monday, picking up a meal for his mother, Susan, 86, who lives at McEwen Terrace, in the west end, by the Sir John A. Macdonald Parkway.

“It’s been a godsend. She has days when she can’t really get around too much, so stuff like this really helps.”

The rising cost of food is a fundamental piece of the “affordability” issue that is gathering like storm clouds in 2022. Ask anyone filling up a gas tank; trying to buy a house; find manageable rent; or buy a chunk of cheese.

The lead statement this week from the head of Ontario’s striking carpenters’ union was telling: “It comes down to financial compensation. We are having an affordability crisis right now in the province of Ontario, and the cost of living, whether it’s groceries and putting food on the table, housing or gasoline to get to work.”

So does Elizabeth Jones, 50, feel it coming and going. She said she had stable housing above The White Horse Restaurant on Tremblay Road for 10 years but it closed last year to make way for a multi-unit housing project. So, with the move to Overbrook, her rent went from $750 all in (shared) to $1,050 plus (shared).

“Money is always tight,” said the disability pensioner, in the food line Tuesday. “Usually that last week (of the month) is the roughest.”

Watson, meanwhile, says the need is probably there to support a third truck but Chef Ric’s operation is close to maximum production.

“I always say this has been the silver lining of the pandemic. It opened up our eyes and got us out in the community, to see the need.”

The meals are available to anyone. For a list of scheduled stops: https://ottawamission.com/ottawa-mission-food-truck-weekly-schedule.