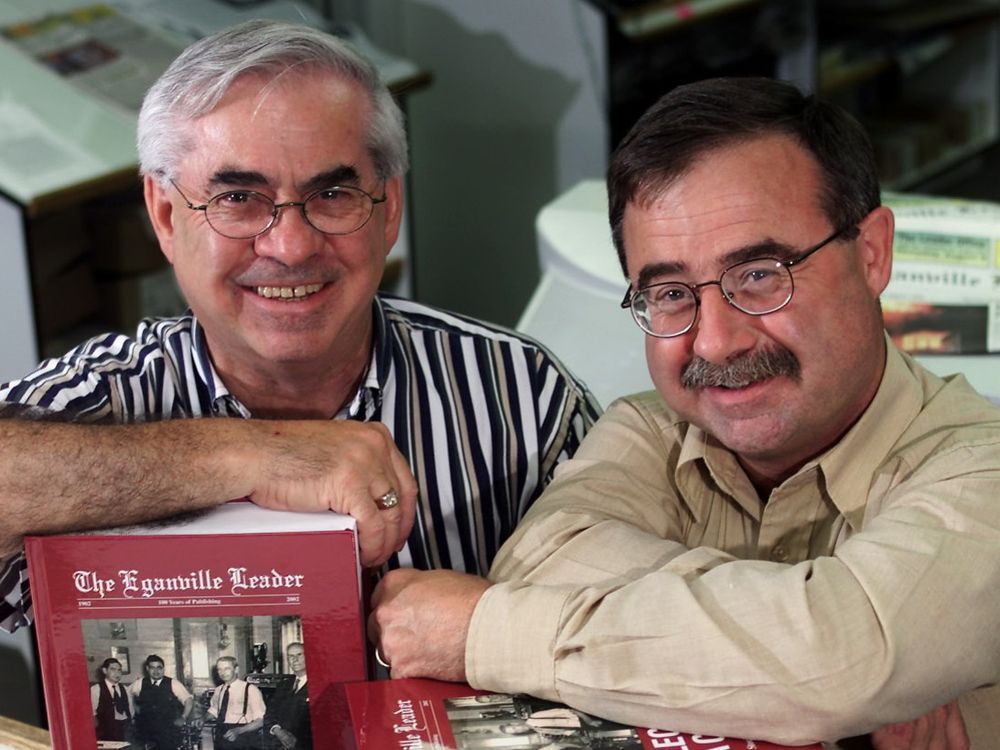 Gerald Tracey got the news Monday morning, on the eve of World Press Freedom Day.

“Seven-thirty this morning. I was checking my email at home and it’s like someone just phoned and said, ‘Your best friend has died.’ ”

He is publisher of the wonderful Eganville Leader and someone named Tracey has been running the weekly in Renfrew County since 1944 — he and his brother Ron (together or singly) for roughly the last 50 years, their father Ambrose before them.

The message was from their printer, McLaren Press Graphics, of Bracebridge, Ont., announcing its closure on May 31. In an instant, a 120-year-old newspaper had, in effect, lost its presses.

“We are now in crisis mode,” Tracey, 69, wrote in an email, wondering if anyone at Postmedia could offer a lifeline.

The Leader is not just any community paper, some “fun fair” photos wrapped around a pile of flyers. It is one of the finest independent weeklies in Ontario, full of hard news about accidents and crime and municipal council shenanigans. (More than one reader has called it The Bible in the upper Ottawa Valley.)

To this day, Tracey sleeps not far from the police scanner and still takes weekend shifts, rotating with a handful of reporters, signing off on every laid-out page.

The problem today, he explained, is there are very few places in Eastern Ontario to print 6,000 copies of a broadsheet in a timely way so that copies can reach readers every Wednesday. (Previous printing outfits in Arnprior, Renfrew and Smiths Falls are either closed or a bad fit.)

He has “options” in Toronto but is worried about the logistics of a Tuesday night copy deadline and a next-day delivery to retailers in Renfrew County or through Canada Post. (The Leader has quite remarkable “penetration” as they say in the industry — 6,000 paid subscribers in a village with about 1,300 permanent residents.)

It also appears caught in a perfect storm.

A message from president Drew McLaren describes the departure of the company’s top two clients, a 40 per cent drop in business from pre-COVID levels, the loss of key employees and this bit of startling news:

“Further, due to the current global paper shortage that is forecast to continue until 2023, we have been put on a paper supply allocation that is well below the 2021 levels, meaning we have no ability to grow the business.”

Tracey was attempting to retire in about a year and eventually sell the paper but now fears the whole plan is in jeopardy.

As just about everyone knows, the print side of newspapering has been through a painful downsizing. It is particularly true of independently owned publishers, who battle to survive in a chain-dominated world. News Media Canada reports that, in 2021, there were about 14 million copies of community newspapers circulated in the country every week, but 13.5 million were free and only 512,451 were paid.

The Leader is in a league of its own. Tracey says revenue has never been higher, the papers are relatively fat at 20 to 24 pages, full colour, yet he can’t find a prospective buyer prepared to operate it with the same tried-and-tested formula.

He is an old-school publisher, the kind who keenly takes on a role as a community builder, the kind who knows the town’s secrets. Tracey himself has been involved in raising in excess of $5 million for local projects, whether it be for the Fairfields Senior Living centre or a paralyzed logger who needs a special van. The full list is lengthy.

It would be absolutely criminal if the paper were forced to close. “Right now, I don’t have any idea what we’ll do after May 31.”

Tracey said he was worried about the future of the paper when the pandemic struck but was relieved to find readers relied on, were even comforted by, their weekly dose of Renfrew County news — especially older customers — and the more local, the better. (And advertisers stuck by.)

We live in an internet age when the palm of the hand knows everything, except maybe what matters most to people and their neighbours. Is it possible a special demographic, defined by a certain rural geography, wants news delivered the traditional way, the way it has always come?

“The thing we hear over and over is, ‘We want the paper in our hands.’ ”

Well, we can only hope the Leader finds news on the right fit to print.