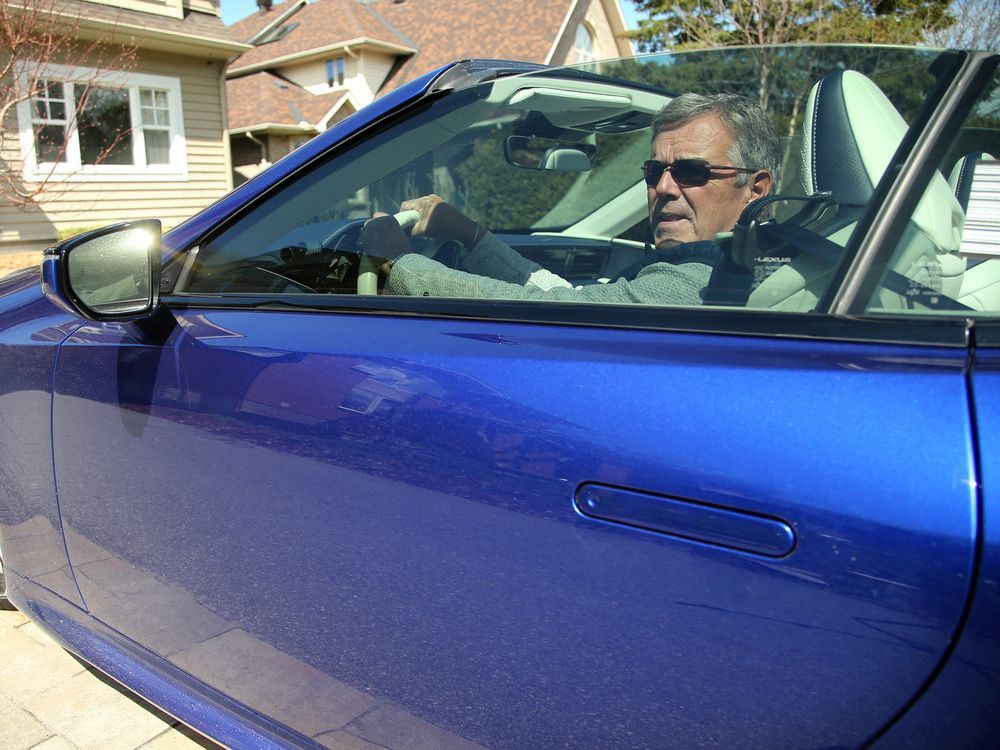 Such is life in border towns, where we live peacefully married, but forever suspicious.

There was a deluge of response last week to columns about Ottawa-area drivers who felt targeted by Quebec police forces over the issue of expired licence-plate stickers — actually expired, just appearing out of date, or in that grey “grace” zone Ontario created.

Customers at the Spa Nordik in Chelsea, Que., after a soak in hot water, were particularly steamed to be hit, days later, with a $495 ticket in the mail for something that, arguably, is not an offence in their home province.

He’s cottaged at Norway Bay, Que., about 70 kilometres west on the Ottawa River, since “I was in diapers,” on land his grandfather staked out more than 130 years ago. Taylor, 76, a retired businessman, has driven back and forth from the site for 60 years.

He favours convertibles and the last handful of cars have been ragtops with shaded side windows, like the current 2021 Lexus, tinted at the dealership, so it met — he was told — Ontario standards.

A curious thing happened that day. Taylor, on a walk at the cottage, was bitten by a dog, bad enough to break the skin and draw blood. So, just before 6 p.m., he began to drive himself to the hospital in Renfrew, planning to cross into Ontario at Portage-du-Fort, Que.

On Highway 303 near the border, he was pulled over by the Sûreté du Quebec. The officer said he noticed Taylor’s vehicle lacked a front licence plate, which is mandatory in Ontario. Taylor explained the front bracket for the plate was on back-order from Japan, but there was the plate on the front seat of the car.

Taylor said the officer began to inquire whether he had a legal right to even be at his cottage because of COVID restrictions. He then asked where he was going and Taylor related the dog bite. The officer, he said, asked to see the evidence.

“Literally, I was taking my pants down in the car for him to take a look at this,” he said this week. “Seventy-six years of age, on the way to the hospital and he’s treating me like a criminal.”

Apparently satisfied the bite was genuine, the officer then turned his attention to the driver’s side window, which he claimed was tinted enough to violate Quebec law. The top, incidentally, was down, offering the officer a clear view.

(The province allows front side-window tinting that provides at least 70-per-cent light penetration, a ratio that can be tested with a special meter officers typically don’t carry with them.)

“You could read a book through the window,” Taylor said. “That’s how light the tint is.”

While the officer was writing the ticket, Taylor said he looked up the Quebec 70/30 rule on his cellphone, which he then showed to the officer.

“He looked at (the phone), threw it on front seat of the car and said, ‘That’s garbage.’”

He was handed a $172 ticket, which he intends to fight in court next month. Most concerning, he stressed, is the treatment of a law-abiding citizen who has invested dearly in the province.

“The lack of respect and, more importantly, holding me back from getting medical attention.”

Taylor said he complained in writing about the officer’s conduct and the matter went before a conciliator. The results are confidential.

The laws about tinted windows do, indeed, vary between jurisdictions. While Quebec has the 70/30 rule for front-side windows, Ontario’s Highway Traffic Act says no coating or tint can be added that “would substantially obscure the interior of the vehicle when viewed from the outside.”

Maximum tint levels vary by U.S. state and Taylor sees his experience as a cautionary tale for the thousands of out-of-province motorists who would be travelling through Quebec, especially in tourist season.

(An SQ spokesman said officers typically do not ticket, but direct the motorist to have the tint “tested” and to take corrective action, if needed, within 48 hours.)

From his long experience in the province, Taylor has heard many stories about Ontario residents who feel targeted by Quebec police — and the pandemic travel restrictions only added to the theory.

“This whole thing between Ontario and Quebec seems to be cyclical and it raises its ugly head every four or five years, it seems.”

Time to cast some light, perhaps, instead of throwing shade.