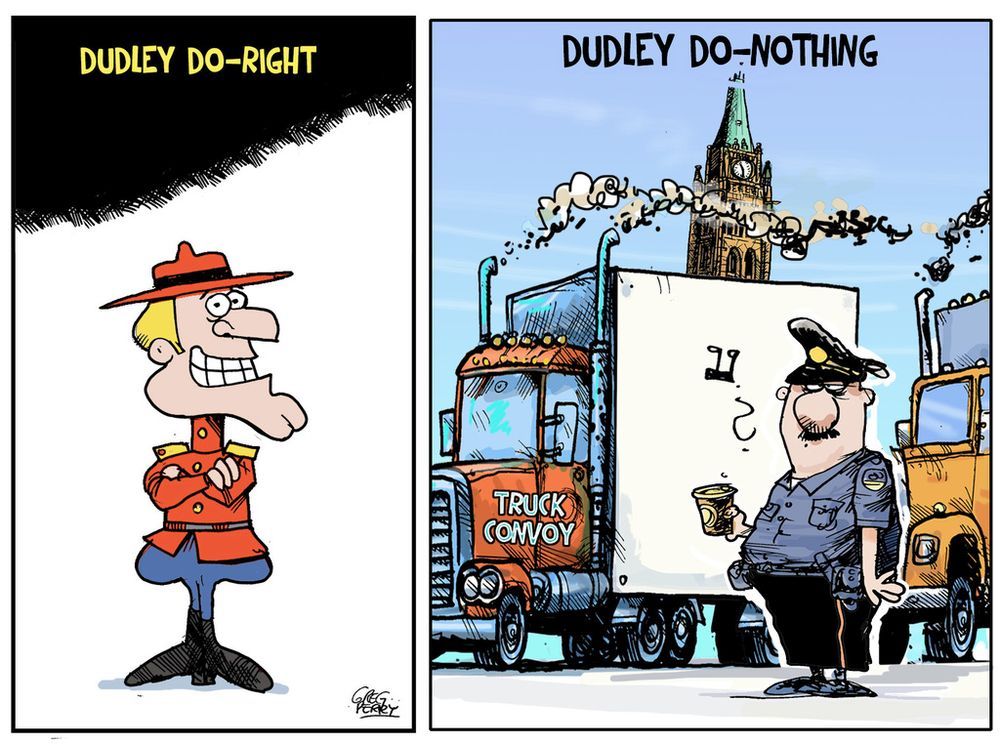 What nobody in Ottawa wants to hear: The capital is in for continued disruption as more so-called “freedom” protesters descend on the city this weekend. Hundreds more trucks are expected; up to 2,000 demonstrators may be present on foot; and another 1,000 or so counter-protesters could show up. That, fellow citizens, is what happens when you appease law-breakers.

For how else to describe the recent comportment of the Ottawa Police and our city leaders? Last weekend’s demonstration was one thing — as Chief Peter Sloly incessantly reminds everyone, people have a Charter right to protest — but his force should have followed up after the weekend, clearing out the remaining diehards rather than letting them disrupt and intimidate residents. Instead, the city and the police have allowed the truckers to create a “staging area” at the baseball stadium and store propane tanks at a newly-built wooden structure downtown. Sloly says the week-long protest is intolerable, unprecedented, unacceptable — all while going along to get along.

The planned “surge” of 150 extra officers into Centretown, Lowertown and the Market this weekend may reassure people. Attempts to redirect newly arriving trucks out of the downtown area may also help. But Sloly continues to say “there may not be a police solution to this demonstration.” He doesn’t explain what he means, but it sounds like: “I’m not capable of doing my job.”

This has been followed by a litany of excuses and deflection. For example, police suggest people haven’t been calling them when crimes occur. Sloly has tried repeatedly to focus media attention on American involvement in the protest. He moans about all the briefings he does, and mentions the threats he has received.

Meanwhile, police allow protesters to bring large fuel containers right onto Wellington Street — in front of the Prime Minister’s Office. Street hockey games take place, bonfires sizzle, fireworks flare. All in addition to the incessant clatter of horns and intimidation of many residents. The Rideau Centre has been closed, the library, NAC and city hall are shut, bridge traffic has been restricted, acts of vandalism have occurred, small businesses can’t operate and essential workers have been delayed getting to their health-care jobs. How is this supposed to end?

Hiding behind this policing debacle is the mayor — who also reminds everyone, incessantly, that he can’t direct the police. Yet the city has been slow to seek a court injunction that would set the legal framework for clearing the streets. Bylaw, which usually loves a good ticketing spree, has steered clear of the illegally parked, noisy rigs in the “Red Zone.”

The chief says the longer the protest goes on, the higher the risk. Clearly. On Thursday, organizers said they’re not going anywhere; their occupation of the city has been well planned. Related protests are occurring, or set to occur, in Alberta, Quebec City and Toronto. Local councillors are now setting up neighbourhood patrols.

Other levels of government will almost certainly have to step in aside from RCMP help; the prime minister, who prefers insults to engagement and suggests there’s no need for the military at this time, may yet be forced into his own “Just watch me” moment.

In a best-case scenario, of course, the protesters disperse soon, out of respect for other citizens. Politicians thoughtfully consider the general motivations that propelled the convoy to travel here in the first place and respond with more than sound bites.

But that’s not usually where appeasement leads. Hunker down, Ottawa.