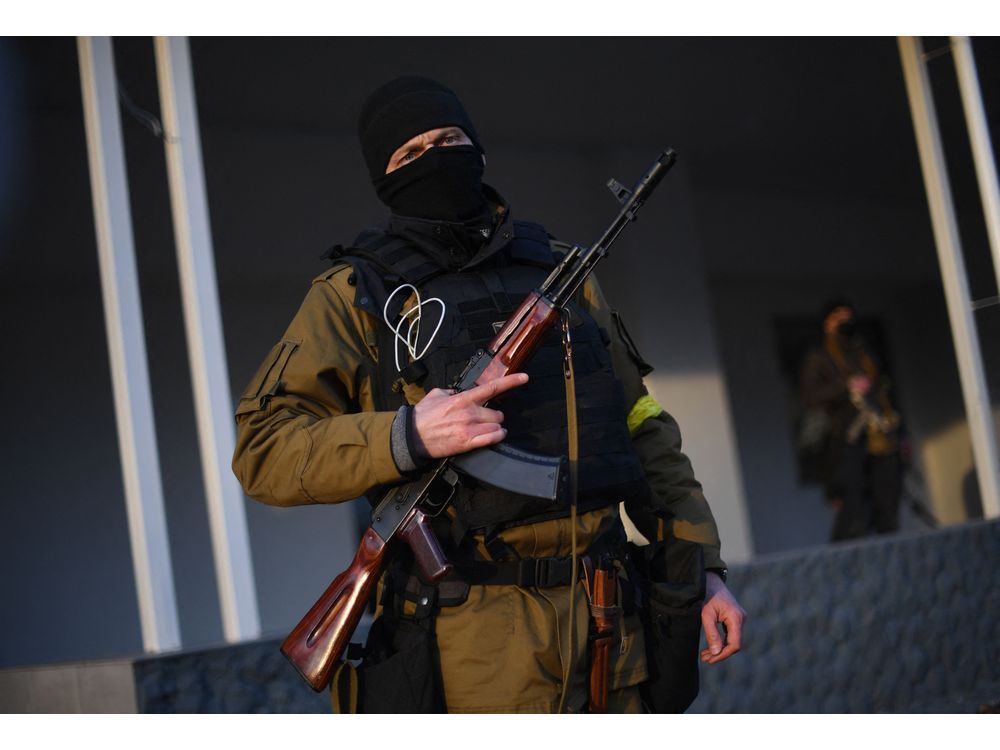 Canadians’ recent brush with law-breaking mobs — the three-week occupation of downtown Ottawa, and the blockades at our borders  — has reminded us that democracy can’t be taken for granted. Which is why we must defend it when it is threatened in other places too. What is happening in Ukraine is not disconnected from us.

There, a thug with an army aims to demolish a democratically elected government and inflict on it the whims of Moscow oligarchs. Russian President Vladimir Putin’s all-out military assault on Ukraine is the first time since the Second World War that an independent European state has tried to crush another.

Western nations will not send in their own armies to prevent it; Putin’s veiled threat to use nuclear weapons if they do ensures this. But that has not left the world without options. The question is whether citizens of democratic nations are willing to pay the economic price of supporting the principles we cherish.

On Thursday, as Russia launched its invasion, western nations including Canada dropped a series of economic sanctions on the Putin regime, targeting Russian banks and wealthy oligarchs, and imposing export controls. Germany put on hold its approval of the opening of the Nord Stream 2 gas pipeline from Russia. Some countries banned the Russian airline Aeroflot. Some professional sports pulled events out of Russia.

But there were no harsh sanctions levelled that day against Putin himself, or against many of the trusted oligarchs who safeguard his personal wealth, estimated in the hundreds of billions. Nor was Russia kicked out of SWIFT, the international banking system critical to financial transactions. Initial measures did not block Russian exports of oil and natural gas or stop western firms doing business with Moscow. Some of these sanctions would hurt the West.

In these democracies, voters are already battered by two years of COVID-driven cost-of-living increases and no one wants to bring on more potential economic sacrifices. Yet no one can afford for Putin to succeed easily in Ukraine; if he does, he will target the Baltics or Moldova next.

There were signs Friday that western leaders realized this. Canada, Britain, the EU and the U.S. finally vowed sanctions against Putin and his foreign minister personally. Debate still swirled about whether or not to expel Russia from SWIFT but Prime Minister Justin Trudeau said he supported doing so.

There is another reason the West must act more firmly: China. The same day Russia invaded Ukraine, Taiwan’s air force warned off several Chinese aircraft that had entered its air defence zone. Beijing is watching closely to see if western actions against Russia have bite or will simply echo the empty scolding that permitted China itself to smother the vestiges of Hong Kong’s democracy.

Canada is a minor player in all of this, though it houses a large Ukrainian diaspora. But it is shoring up its NATO presence in the Baltics and will send HMCS Halifax to boost NATO’s presence to the Mediterranean. Will the Canadian and provincial governments do more about the millions — perhaps billions — that Russian oligarchs have sheltered in real estate here? Or will they be satisfied with symbolic steps such as banning Russian vodka in the LCBO?

Stopping Moscow’s reckless rampage is, unfortunately, a long game. Putin is prepared for sanctions. Deeper cuts against him may hit western economies too. It is a lot to ask of ourselves in the name of democracy. But it is not too much.