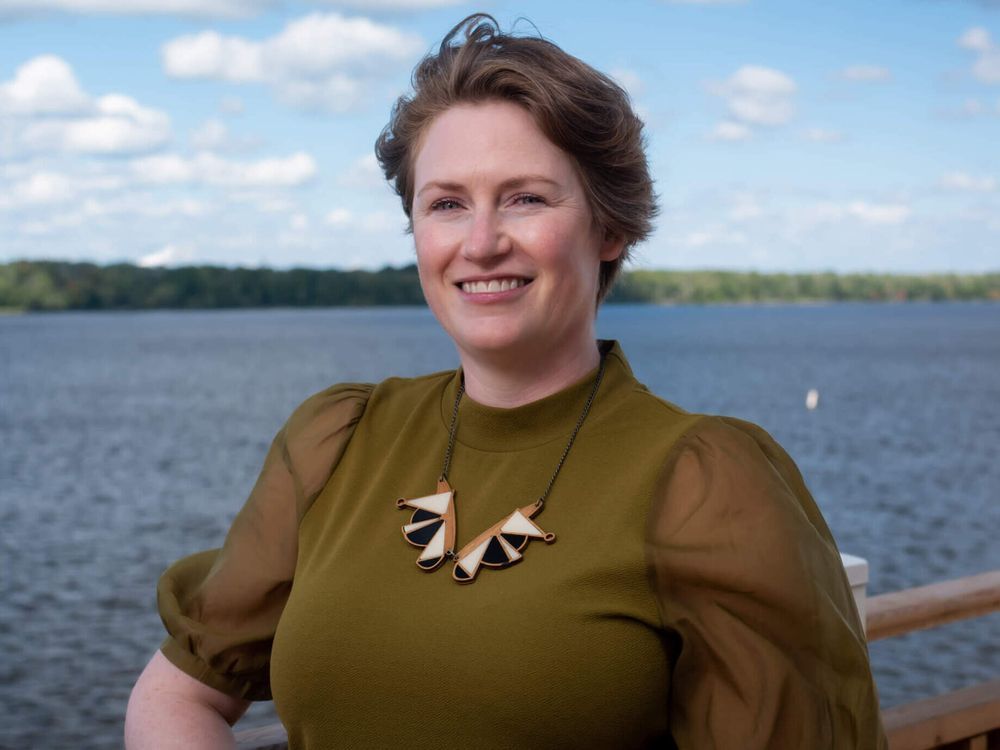 Earth Day 2022 will be the first for Ottawa’s new Riverkeeper, Laura Reinsborough, who took the job last October after a national search for a new CEO for the volunteer organization. For more than 20 years, the Ottawa Riverkeeper has kept a watchful eye on the Ottawa River, or Kichi Sibi — the Great River — as it’s known in the Algonquin language.

Reinsborough, a native New Brunswicker, has Master’s degree in environmental science from York University and for the past 15 years has worked in the non-profit sector on urban food security. She replaced longtime Riverkeeper Meredith Brown who retired.

“In this decade where climate change and biodiversity are such crucial issues, I was feeling this desire to work more directly on environmental issues,” said Reinsborough, who says she hopes to raise the profile of Riverkeeper in the community.

“For those who know it, Ottawa Riverkeeper has a really solid reputation,” she said. “But not everyone in the watershed knows about us and that we’re working in their best interest to care for the river. There’s two million people rely on the river for their drinking water. So when we say we’re all about making sure the river is swimmable, drinkable and fishable, that’s very real.”

How much does a river otter weigh in trash? Reinsborough hopes to find out the answer on Earth Day during this weekend’s cleanup of the Ottawa River. It’s her personal goal to collect an otter’s worth of garbage.

“We’re putting out the challenge to collect five kilograms. If you’re lucky enough to find an old tire, you’re going to hit that quickly,” she said.

“Eight kilogram is the size of an average river otter, so that’s my personal goal. (Because you’re probably wondering, one otter is equal to 536 empty pop cans or 864 empty water bottles.)

“The shoreline cleanup is a great way to get involved. It can be as simple as, if you’re along the shoreline, to just pick up a few things. But we do organized shoreline cleanups as well, so we make an event of it and you can learn more about the river and the ecology as you’re doing it.”

“Really, it’s about getting out there and collectively seeing how much we can gather. There’s a great sense of belonging when you take on something much bigger than yourself.”

To join the challenge, register with the website icleanup.ca, then start picking.

“We get asked all the time, ‘How healthy is the river?’ But that can mean so many different things,” Reinsborough said.

In what she calls a “groundbreaking initiative,” the Riverkeeper has begun to monitor key elements that are indicators of the river’s overall health.

From a list of some 60 different variables, the Riverkeeper winnowed its indicators down to 14 key factors, including easy measurements such as temperature, flow volumes and ice cover, to more complicated issues like algal blooms, diversity of fish species, phosphorus content and changes in land use.

“It’s through those 14 indicators that we’re trying to get a holistic sense of how to answer that question,” she said. “How can we share that? Because water really is the report card for the whole watershed, telling us about the health of the soil and about our human health as well.”

Detailed reports on each indicator can be found on the Riverkeeper’s website, ottawariverkeeper.ca.

Monitoring the abundance and biodiversity of the Ottawa River’s native species — and the encroachment of Invasive species — is vital to assess river health.

Zebra mussels have established themselves in the river while colonies of double-crested cormorants, once confined to the Great Lakes, are now common on the Ottawa River. Plants like the Norway maple and lily of the valley have spread from gardens to the riverbanks, while irresponsible pet owners think the river is a suitable home for their unwanted red-eared slider turtles.

Meanwhile, the population of some native species have crashed.

“We wanted to see how the American eel population can be restored,” Reinsborough said. “It’s down by 99 per cent, which is just staggering. It’s mostly adult females that are migrating here and so for the overall health of that species, the Ottawa River is quite important.

“We often see the river, but to know of its ecology provides a sense of connection, both of its importance and also of the urgency of the need to protect it.”

Waste not, want not

One of the reasons that Ottawa Riverkeeper was formed 20 years ago was to put pressure on the City of Ottawa and other municipalities to reduce the amount of sewage overflow entering the river.

“Monitoring and advocating around pollution control is a big reason Ottawa Riverkeeper exists,” Reinsborough said. “We’ve seen a lot of success in having sewage overflows reduced. It’s been one of our successes. The City of Ottawa has reduced those overflows by about 80 per cent but it took years and years of working with the city to see if those improvements could be made. I’m proud to say the team has been quite successful with that.”

“But of course, that’s not the only source of pollution. Coming up soon we’ll be presenting at the nuclear waste hearing at Chalk River. We know there’s a lot of legacy waste that exists at Chalk River. They’ve put together a proposal on how to manage that and we’ll be speaking to make sure that water quality is taken into account. We’ve submitted our comments, we had consulted with a number of experts to pull together a true technical understanding of what is proposed, and we’ll be presenting at the hearings.”

If not the Riverkeeper, then who?

Who’s responsible for the Ottawa River? The answer is familiar for anyone who knows Ottawa politics. Everyone. And no one.

“It’s a really complex question,” Reinsborough said. “It’s the provincial boundary for Ontario and Quebec for a large part of its run. It’s almost entirely within the unceded and unsurrendered territory of the Algonquin. And it also runs through our nation’s capital.

“The Ottawa River is the biggest tributary for the St. Lawrence. And it’s a heritage river. You’d think with all of those players connected by the river, that there would be strong co-operation to protect it and to make sure the river is being taken care of. But it’s really the opposite that’s happened, the river’s ended up being nobody’s responsibility. That’s a big part of why we exist — to ensure the river is being taken care of.”

The Ottawa Riverkeeper is a volunteer-run organization that depends on citizen scientists to be its “eyes and ears” throughout the watershed. You can find out more about how to be a “Riverwatcher” on its website. If you’re more comfortable in formal wear than hip waders, the Ottawa Riverkeeper gala on June 1 promises “a spectacular evening of fine cuisine, musical performances, and dancing” with incredible views of the river and Rideau Falls from the Canadian Geographic Society building at 50 Sussex Drive. More information at riverkeepergala.com