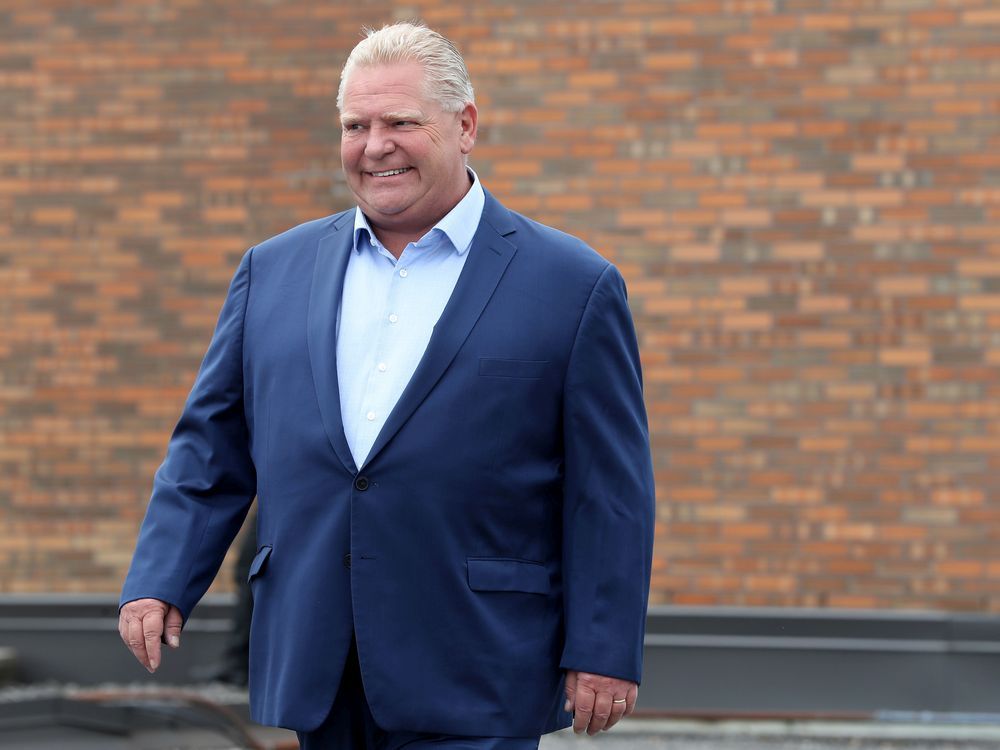 Ford, who was in Ottawa on Monday for the first time during the provincial election campaign, was asked about Nepean PC candidate Lisa MacLeod receiving a $44,000 allowance from her riding association over three years when she was MPP.

The tidbit was dug up during the election campaign by the NDP, which found seven other PCs who have accepted riding allowances as MPPs.

“When I found out about anything like that, I was frustrated, to be frank with you, but it was all by the law, it was all audited, it went to Elections Ontario,” Ford told reporters.

“I think all three parties or four parties need to get together and have a chat about it after this election. I want to put an end to it.”

MacLeod couldn’t be immediately reached for comment on Monday morning.

Ford, standing on the roof of the building leased by the Ottawa Citizen and Ottawa Sun, with Highway 417 providing the backdrop, was chiefly promoting his party’s plan to widen the highway between Highway 416 and Maitland Avenue.

He rejected a suggestion that widening the highway — so far at an undisclosed cost — would simply draw more motorists, not solving the problems of traffic jams.

“Some people will say, all you have to do is build transit. Well, I’ll tell you, we do both,” Ford said, noting provincial spending on the City of Ottawa’s O-Train network.

Across the highway, a construction crew was working on the Stage 2 LRT expansion, which will include a pedestrian bridge near where Ford held his press conference.

But Ford’s focus was on the highway, not on the LRT, which will run parallel to the highway for about six kilometres under Stage 2.

Ford’s cabinet called an inquiry into the city’s first phase of Ottawa’s LRT line, which suffered breakdowns and derailments in the first two years of operation. The inquiry hearings begin in June, with testimony expected from current and former officials from city hall and the Rideau Transit Group.

“We were in there financially for Stage 1, we’re in there for Stage 2. Were we happy? No. That’s why we called the inquiry,” Ford said.

“We want to make sure that any problems that happened in the past aren’t going to happen in Phase 3, but I can assure the people of Ottawa, we’re all in for Phase 3 as well, but I don’t want to see the same problems and the same concerns because it was disturbing what was happening in the other phases.”

Ford said “every single day” he’s been in touch with hydro agencies, including Hydro Ottawa and Hydro One, about the storm damage.  The province dispatched firefighters from Ontario’s Ministry of Northern Development, Mines, Natural Resources and Forestry to help with the cleanup in Ottawa.

According to Ford, he was “boots on the ground, making sure we have the resources in here,” talking with local authorities.

Jeremy Roberts, the PC candidate seeking re-election in the riding, was the only Ottawa PC candidate standing with Ford during the announcement.

In the 2018 provincial election, Roberts won by only 175 votes over the NDP’s Chandra Pasma, who’s running again in this election.

Roberts left reporters on the roof of the building without answering questions after the press conference, despite campaign staff assuring reporters he’d come back to talk.

Ford’s campaign stop on the roof of the Ottawa Citizen and Ottawa Sun building raised some eyebrows and prompted a rebuke from the papers’ editor-in-chief.

“It strikes me as inappropriate to host a press conference in a building that carries our news organizations’ logos and I have reached out to our landlord to discuss the matter,” Nicole MacAdam said.

Neither the Citizen nor Postmedia played any part in organizing the event and were not given advance notice of it.

“As a news-gathering organization, we take our credibility seriously and work hard not to show favour to any political party or candidate. While news publications’ owners or editorial boards may choose to endorse one party or another, when it comes to reporting on the campaign, we strive to include many sides to a story so that voters can make informed decisions.”

The building is owned by Regional Group, which authorized its use by the Ford campaign. A call to Regional’s CEO, Sender Gordon, was not returned.

with files from Blair Crawford