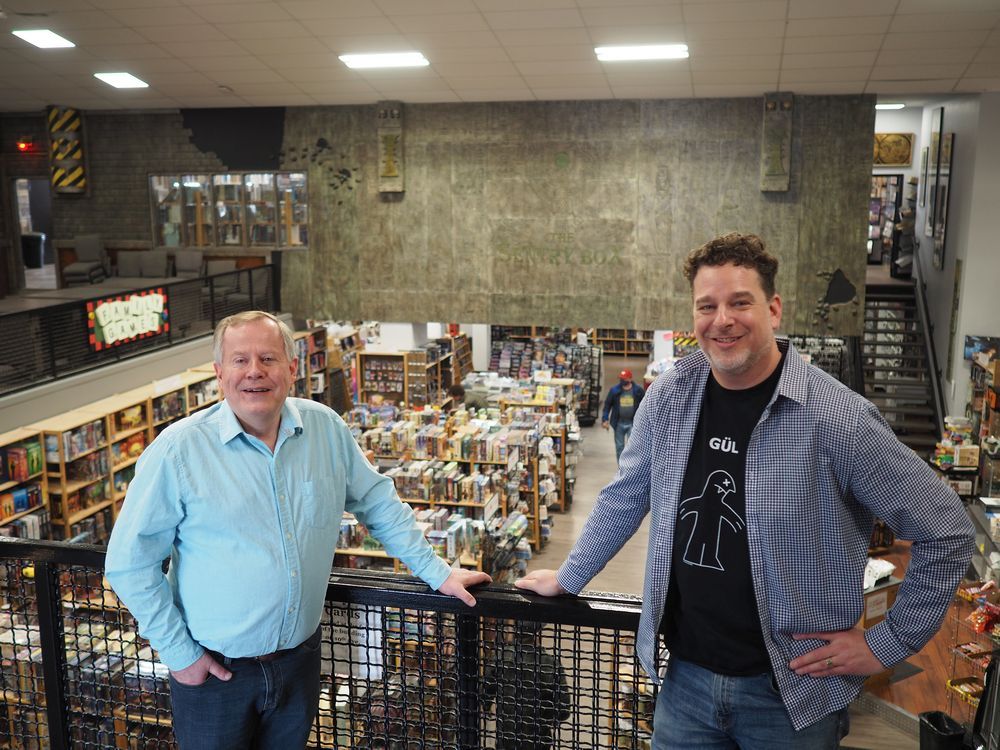 In Garry Snow’s documentary, Friendly Local Game Store, a number of gaming aficionados who frequent Calgary’s The Sentry Box talk about their first experiences in the store.

It usually involved simply soaking up all the wonder and awe that came with their first glimpse. Dubbed the world’s largest game store, visitors are met with 13,000-square-feet of geekdom paradise featuring a mind-boggling bounty of games, books, miniatures and other collectibles.

Snow does not put himself in the documentary. But he had a similar experience in 2013 when he first arrived in the city from British Columbia, where he had grown up as a devoted Dungeons & Dragons player.

“That was me,” says Snow. “That really resonated with me. Because I walked in and the first thing I did was stand there and take it all in. I took a picture and sent it to all my old Dungeons & Dragons teen friends and said ‘Look at this place!’ in a text. I couldn’t even believe it was in Calgary.”

It’s the popular, if not singular, sentiment in Friendly Local Game Store, an hour-long documentary that consists mostly of talking heads heaping praise on the Calgary institution that has been lovingly overseen by owner Gordon Johansen going on 42 years. What emerges is the strong sense of community that Sentry has fostered among the city’s devoted gamers. There is no conflict or drama to be found here, just a network of customers, employees, bloggers and family members talking about how important the Sunalta store has been to them over the years.

Snow traces the origins of the store, which began modestly in a 450-square-foot space on the corner of Crowchild Trail and Kensington Road in 1980. It moved to two other locations, both in Marda Loop, before Johansen found its current home 27 years ago. The sprawling space was further bolstered when he established another store next door dedicated to cards, adding 6,000 square feet.

All of which seems to make it not only the largest game store in Canada but the world. That’s certainly how it has been branded in the past few years. But beyond the rows and rows of treasures found there, the Sentry has also become a meeting place for gamers. Game nights are held on the property regularly, which has only furthered the sense of community at the store.

While Johansen’s success can hardly be attributed to good luck, the documentary shows how he did show a savvy sense of timing when it came to the store’s many expansions. In 40 years, the gaming world has evolved from military-themed board games to the rise of Dungeons & Dragons and later Magic: The Gathering, a popular trading-card game that began in the 1990s, and now to a sprawling subculture that includes endless titles. But good timing alone cannot explain the success of the store.

“Every other store in the world also had that good timing,” Snow says. “I tried to hone in on it. There are some questions I asked about the cold weather in Calgary, that we spend more time indoors. But I think it just hit that critical mass and it became this very special place and (Johansen) made the right moves at the right times, when it coincided with how things were growing There are booms and busts in the gaming industry over 50 years that it has been out there. He just had a knack for timing it right. Whether you want to call it intuition or luck, he was the guy who steered it throughout this whole period.”

The film also shows how changes in the local community reflect the larger evolution of the gaming world. It’s become increasingly welcoming to all who want to participate, including members of the LGBTQ+ community and, in particular, women.

“I know from my own interest in the game industry that it’s dramatically changed over time,” Snow says. “When I grew up, and this didn’t really end up in the movie, teenage boys who were geeks like myself talked about playing Dungeons & Dragons in hushed tones. You did not share that until someone was on the inside and you could trust them because it was an embarrassing, geeky thing to do. Over time, geek culture has become more prominent that you can say it out loud. The other aspect of it is when it became more popular, it brought in wider groups of people. Everybody started to see value in the game world and what they could do with games in bringing people together.”

Friendly Local Game Store will have its world debut on April 28 as part of the Calgary Underground Film Festival. Snow began making films upon his arrival in Calgary at that festival’s 48-Hour Movie Making Challenge and now works as a freelancer doing marketing and corporate videos. He also hosts the Dieku Podcast, which has him conducting interviews with game designers.

This certainly gave him an insider’s insight into the gaming world. Johansen, who appears prominently in the documentary, said he didn’t expect the filmmaker to get quite as much content as he did from talking to the store’s devotees. Johansen made the decision seven years ago to not sell the building as he had originally planned to do when he reached a certain age, which has put retirement on hold. He hopes to run for another eight years to celebrate the store’s 50th anniversary.

Watching the film was a reminder of how vital the store has become for many of its customers.

“The funny part was he kept trying to get emotional reactions out of me,” Johansen says. “He did that with a couple of people with the question: ‘Can you imagine life without the Sentry Box?’ He hit me with ‘What would you have done if there was no Sentry Box?’ It’s like ‘I suppose I would have got another job and do something else.’ But people were literally tearing up in some cases. They just couldn’t imagine it.”

Friendly Local Game Store screens Thursday, April 28 at 6:30 p.m. at the Calgary part of the Calgary Underground Film Festival. It will be available on demand from April 29 to May 1. Visit calgaryundergroundfilm.org.