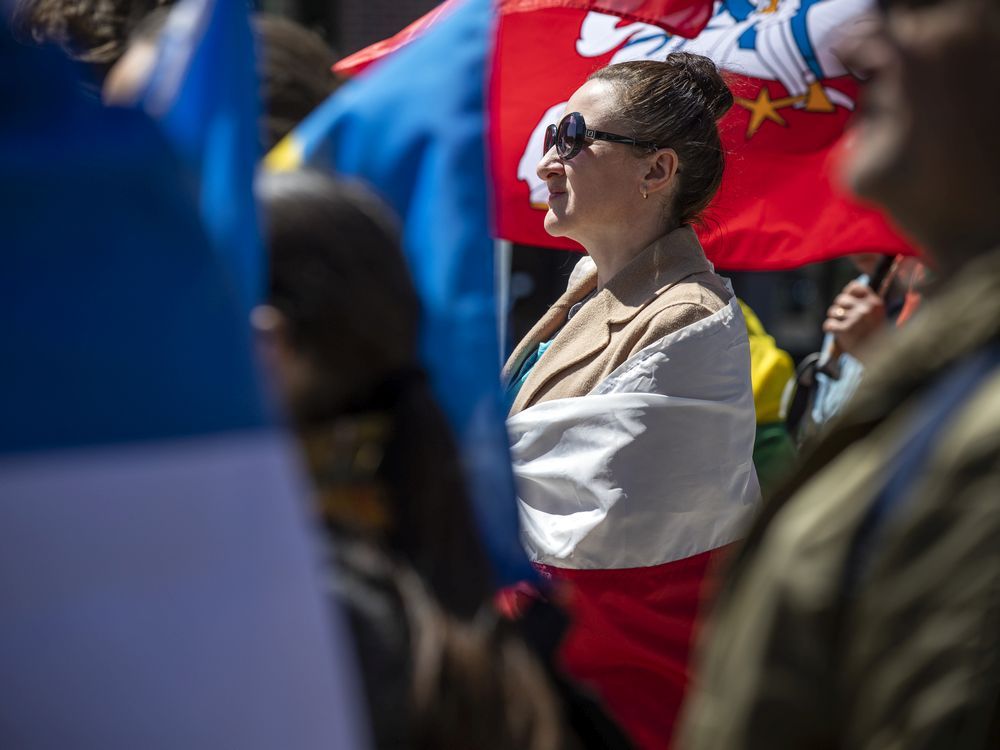 About 50 people gathered Saturday in Ottawa to protest the Russian invasion of Ukraine.

Natalia Strelkova stood on the steps of the Canadian Human Rights Monument on Elgin Street, wrapped in the red and white flag of the Belarusian opposition, and spoke about her grandfather. She told of how he fought with the partisans during the Second World War and how he was captured and murdered by the Nazis.

“I only knew him from the stories about him. I knew him as a kind and gentle person. A loving father and grandfather,” Strelkova said. Now, she said, the country he fought for — Belarus — has allied with the Russians to attack Ukraine.

“I don’t understand how he would even comprehend this war,” she said. “Is this what he fought for 77 years ago? I don’t think so.”

Strelkova was among about 50 people who gathered Saturday to protest the Russian invasion of Ukraine. There were speakers from the Baltic states of Lithuania and Latvia, many wondering if their countries would be the next targets of Russian President Vladimir Putin.

“Today is Mother’s Day,” said Lithuanian Loreta Gudynaite, who carried her country’s yellow, green and blue flag as she spoke of the thousands who have died in the Ukraine war. “There are mothers who will never see their sons and daughters again.

“What is happening now in Ukraine seems very close to us. We Lithuanians share a similar history with Ukraine. We all were occupied. We understand what’s happening.”

Sunday also marked Victory in Europe Day, May 8, 1945, when the Second World War ended for the western allies. Russia marks its own Victory Day a day later, on May 9.

Gudynaite noted the irony of Russia honouring its defeat of fascist Nazi Germany even as its forces pound Ukraine.

“Tomorrow, the fascists will celebrate their victory over fascists,” she told the crowd.

All 12 Photos for Gallery

Even as the demonstrators chanted “No to war!” and “Slava Ukraine!”, Prime Minister Justin Trudeau was in Ukraine on a surprise visit to meet with Ukraine President Volodymyr Zelenskyy.

Trudeau was joined by Deputy Prime Minister Chrystia Freeland and Foreign Affairs Minister Mélanie Joly on the trip, where he pledged Canada’s continuing support for Ukraine and called out Putin’s “heinous war crimes”.

After Sunday’s rally in Ottawa, the group made its way up Elgin Street to the the National War Memorial where they laid flowers on the Tomb of the Unknown Soldier.

Gudynaite said she hopes it helps raise attention to the war and encourages others to share their opinions and to talk to people about it — even Russians.

“Russian people are still supporting Putin,” she said. “But the time will come when they will start to see what’s going on. I really believe that.”