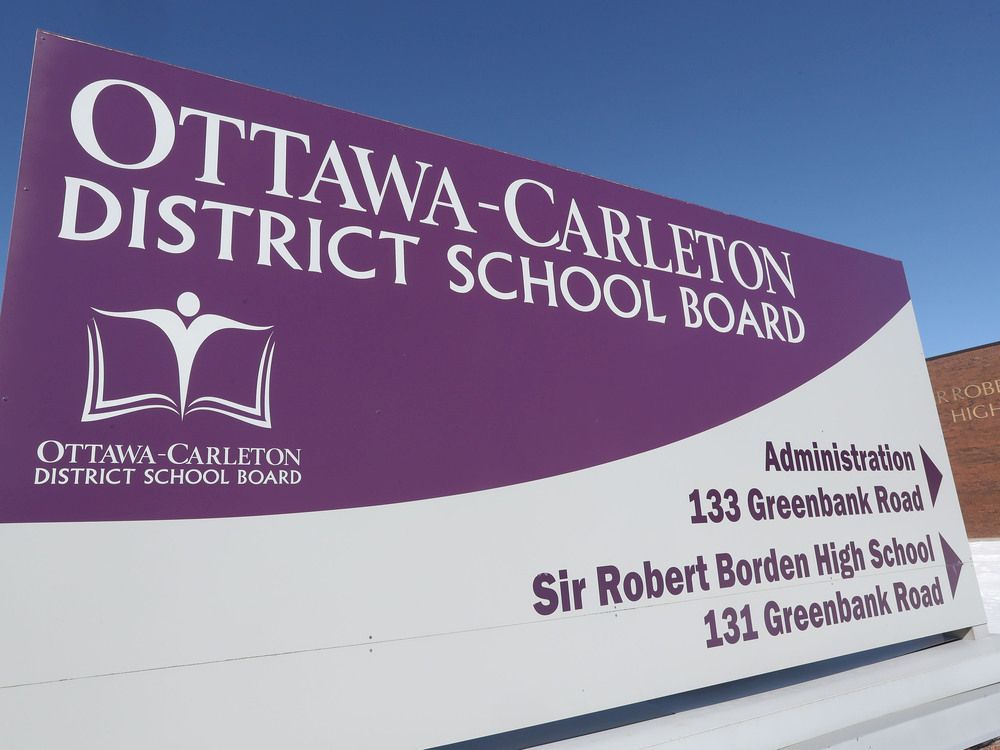 The controversial issue of police officers in schools landed briefly again Tuesday before trustees at the Ottawa-Carleton District School Board.

Nearly a year after the board voted to end a 20-year-old program that assigned police officers to schools and apologized for the harm it caused marginalized students, trustee Donna Blackburn proposed the board’s director discuss with police how they can help ensure safety and security at schools.

However, her fellow trustees moved to postpone debate on Blackburn’s motion indefinitely, in effect pushing it into oblivion.

Trustee Christine Boothby said Blackburn’s motion was not needed and would only hurt people in the communities to which the board apologized.

“We don’t need to open this up again so our community potentially feels threatened.”

Blackburn said she was not seeking to restore the police school resource officer program.

She said the current system — principals calling 911 or the police non-emergency line if there’s a problem at school  – is not working. For example, Blackburn said one administrator told her she was on hold for three hours waiting to report an incident to police. Student victims of violence at school are receiving less service, Blackburn said.

Blackburn’s motion was condemned by Asilu Collective, which lobbied to remove police from schools.

Delegate Sam Hersh told trustees at the meeting that re-establishing a formal relationship with police was unconscionable after the board already voted to end the school resource officer program because it was causing harm.

Hailey Dash, representing the Asilu Collective, told trustees that various reports have shown that the only students who benefit from police in schools are white, middle and upper class, and neuro-typical.

“While they are benefitting, others are being actively harmed.

“School safety cannot be enhanced by policing, this is a racist lie that cannot be perpetuated by a public school board like OCDSB.

“Policing, as we know, it harms, it violates, it criminalizes and of course it kills, and I hope that you all vote tonight based on these facts.”

A delegation from Mae Mason included Blackburn asking if Mason was calling her a racist and  chair Keith Penny urging Mason not to reply to Blackburn’s question and then apologizing for misgendering Mason, who uses the pronoun they.

In an interview, Blackburn said it’s impossible to have a reasonable discussion with lobby groups that don’t believe police should exist in society.

“Did they even read my motion?” she said.

The motion said the director, Camille Williams-Taylor, would be responsible for discussing with police how to develop “standards of practice” that would allow for police to support schools on matters of safety and security of students, staff and board assets.

Williams-Taylor has 30 years of experience with equity and diversity issues and can be trusted to have a discussion with police, Blackburn said.

At the meeting, Williams-Taylor said school board officials already have discussions with police, although the situation is “murky” since the school resource program ended.

Sometimes there are significant delays in calls being answered and no “designated place” for calls to land, she said.

Provincial regulations require principals to call police for serious crimes such as the use or possession of weapons, drug trafficking, sexual assault, robbery, hate crimes and bomb threats.

Associate director Brett Reynolds said administrators no longer have a personal contact with a police officer they can call, even if it’s just to consult with them, but at the same time, some students feel safer with the current system that has eliminated the school resource officer program.

After the Ottawa-Carleton board voted to end the school resource officer program in June 2021, Ottawa police stopped the service at all four school boards.

The school resource officers responded to criminal matters at schools but primarily their work included talking to students, working with victims, giving advice to administrators, assessing threats posed by students, mentoring students and linking students and their families to community services.

The school board studied the program and produced a report that was highly critical. Some racialized and marginalized students felt threatened by the presence of police officers at schools, the report found.

The program was created to build relationships between youth and police, but operated for years with no review of whether it met that goal.

“Instead it (was) assumed to be a success, based on little evidence other than perceptions of the predominately white adults (at the Ottawa-Carleton District School Board and Ottawa Police Service) who put it in place and benefit from its operation,” said the report.

The report came in the context of a wider debate over the role of police, systemic racism and anti-Black violence.

“Having armed police officers in schools has the potential to impact the well-being and development of all youth, but racialized youth are particularly susceptible to negative impacts, given the long-term and widespread problem of systemic racism,” the report said.

The report included a survey of about 3,100 parents, students, former students and community members — the majority of them parents — who reported split opinions on the issue. For example, 370 respondents reported positive encounters with school resource officers, 90 people reported negative experiences and 497 said they had no experiences or neither negative nor positive ones.