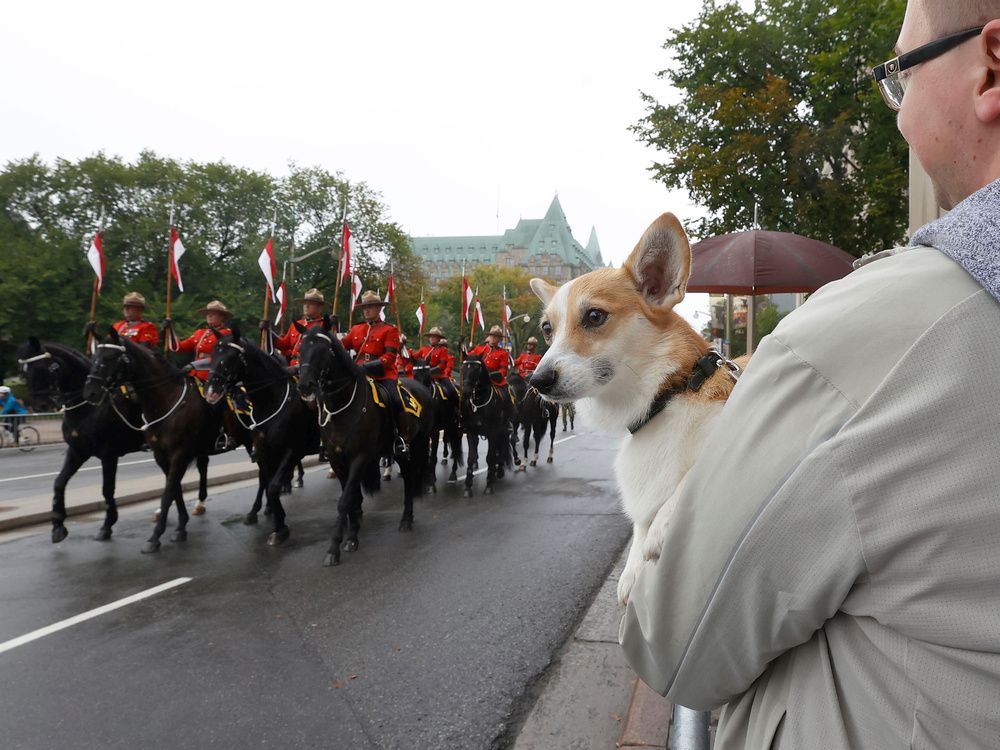 The world bade farewell on Monday to a woman whose devotion, dignity and sense of duty were perhaps unmatched in her time.

“She had poise and class,” said one purple-bloused woman, Shaan, who attended the parade that marched from Cartier Square to Christ Church Cathedral in the late Queen’s honour. “She was no-frills, even if she wore frilly things.

David and Robin Tremblay, meanwhile, drove from Sudbury with their dog, Bella, to witness Monday’s ceremony. “This is an important part of history that we wanted to be a part of,” admitted David, “so that generations from now, we can tell our kids and grandkids that we were in Ottawa to celebrate the passing of the Queen.”

“The way she carried herself was remarkable,” added Robin. “Whether we liked her decisions or not, I think she always did the right thing, even when that was hard to do. I think that was important to her, and it was very important to me as well. She was someone I was proud of.”

Similar sentiments were echoed by others along the parade route Monday, from Veronica and Graham Downing, who on Friday rang the bells for the Queen in their Suffolk, England, church, two days before boarding a plane to attend a conference in Ottawa, to Marc-Antoine Rivero-Séguin, a young resident of Chelsea, Que. “It’s fitting to pay respect to her,” Rivero-Séguin said. “Her devotion to serving, relentlessly, until two days before her death, was amazing.”

I imagine that most who attended Monday’s ceremony, like myself, never met the Queen, but were nonetheless transfixed by her. In my case, it happened a dozen years ago, when I found myself in her orbit and unexpectedly drawn by her gravity.

She visited Ottawa in 2010, and I was covering her stop at the newly renovated Canadian Museum of Nature. I had no particular feeling one way or the other regarding the monarchy. I felt of British royalty the same as I did about soccer — I knew that many people were crazy about it, and most of them lived elsewhere.

A phalanx of media were on the sidewalk in front of the museum that day, awaiting her arrival. Behind them stood about 500 eager spectators. I stood back from the crowd, close to the museum’s front doors and just outside the rope that cordoned off the front walk.

The limousine arrived and the Queen, wearing a powder-blue outfit, got out to much cheering and applause. Then she and her lady-in-waiting walked up to the museum. There were others in her party, but I recall them keeping a respectful distance. (In truth, I remember almost nothing about them. My memory has all but erased them, leaving just the Queen and her attendant.)

When she reached the museum, we stood about 10 feet apart. She, I’m sure, did not notice me, but I could not take my eyes off her, as I was suddenly enveloped and left breathless by her warmth, by a deep respect for her sacrifice and service. She emanated light and decency, and it had caught me in a spell.

And then she went inside. My royal moment was over, yet the warmth remains.

Others have experienced far more intimate meetings with the queen. Who, after all, has met more people in her lifetime?

As RCMP commissioner, Bob Paulson shared a morning tea with her, sitting immediately to her right in a small glass building the size of a garage at Windsor Castle during her Diamond Jubilee. The gathering included only about 20 people.

On that occasion, Paulson was presenting the Queen with a sword to mark her appointment as honorary commissioner-in-chief of the RCMP.

“She was talking very fondly about this book that she read as a girl,” Paulson told me over the weekend, “which ignited her passion for Canada and the Mounties. And we’re all trying to be proper, but she was so gracious and made us feel very comfortable.”

At one point during the tea, the Queen brought out her purse and opened it. “I could feel my wife kind of leaning over me to see what was inside it.”

But who wouldn’t? The Queen took out a notepad and wrote something on it — Paulson couldn’t tell what — and then she took out a tube of lipstick and applied some to her lips.

“After that, my wife knew she could do that at the table, and if her mother ever scolded her for it, she could just reply, ‘Well, the Queen does it.’ ”

Paulson remembers the Queen’s humour. On another visit to London, to present her with an RCMP horse, it was the Queen who was particularly excited to give Paulson a gift: a hand-carved wooden rocking horse. After she left, Paulson, not a small man, got on the wooden horse, a comic image that was not lost on Her Highness, who had doubled back and caught Paulson goofing around.

“She was behind the wheel of her Range Rover,” he recalled, “and broke into a belly laugh when she saw me.”

It was easy, Paulson said, to succumb to the Queen’s glow.

“It’s an aura,” he said. “An aura of pure, inspired leadership that doesn’t have a bias towards any particular political or government slant. It was pure. And you felt it, you really did.

“She defined the role of monarch,” he added. “There was formality to it. It wasn’t a free-for-all. But she put people at ease. She was very special.”

As Monday’s parade marched slowly through a drizzle that the Queen might have found comforting, schoolteacher Sam LeClair was in her classroom at Summerside Public School in Orléans, teaching her Grade 8 class about the monarchy.

LeClair was 10 years old on Canada Day 1990, standing attentively in her Girl Guide uniform alongside the red carpet as the Queen walked from the Peace Tower to the Centennial Flame. LeClair’s mother and Guide leader, Marni, was a staunch monarchist (is there another kind?) and had taught her daughter the protocols beforehand, so Sam knew to curtsey, to not ask questions and to address her as Your Majesty, but only if spoken to first.

Sam was nervous, especially when the Queen stopped and remarked on her and her friend, Jessica’s badges, and asked which group they belonged to.

“She took some time to just, you know, have a little moment with us,” LeClair recalls, “and I felt quite proud.”

Only moments later, after the Queen passed, the CBC’s Wendy Mesley approached LeClair to ask if she could interview her about her chat with the Queen.

“My dad taped it, and it’s still on VHS to this day, in my basement in a special little box.”

LeClair expected that few in her class of 30 students would know much about the monarchy and even fewer, perhaps, might care. But she intended to discuss the Queen and her legacy with them on Monday, and let the historical chips fall where they may.

“I’ve always seen her as just a very strong, grounded, kind and steadfast woman. You couldn’t get much past her; she was a no-BS kind of person. And she did as much as she possibly could for so many people. She treated it all with amazing dignity and amazing integrity.

“I really don’t think we’re going to have someone like her again, not in our lifetime, at least. She was incomparable.”