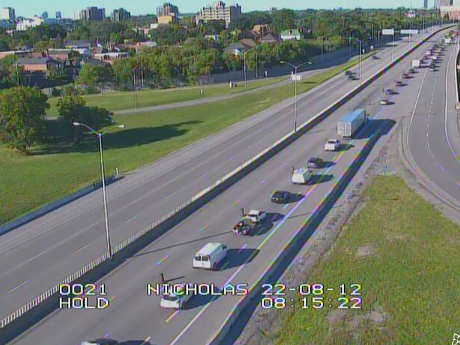 Highway 417 is closed between Metcalfe Street and Carling Avenue for the replacement of the bridge over Booth Street. The closure began Thursday at 8 p.m. and is slated to end at 6 a.m. on Monday, August 15.

On Friday morning, motorists entered long queues to exit the highway before the closure.

Traffic cameras showed westbound cars and trucks backed up single file from the Metcalfe Street exit all the way to the Vanier Parkway and at times past it. Eastbound traffic extended from the Carling Avenue exit past Woodroffe Avenue.

Progress appeared slow for the vehicles stuck in traffic as they were funneled down to one lane to exit the highway and enter a detour designed to bring them around the disruption and back onto the highway.

Traffic cameras showed a constant stream of vehicles on the detour roads, with volume in some areas, but the main slowdowns appeared to occur on the highways before the detours.

You can track traffic conditions on the city of Ottawa map here: https://traffic.ottawa.ca/map/index?lang=en