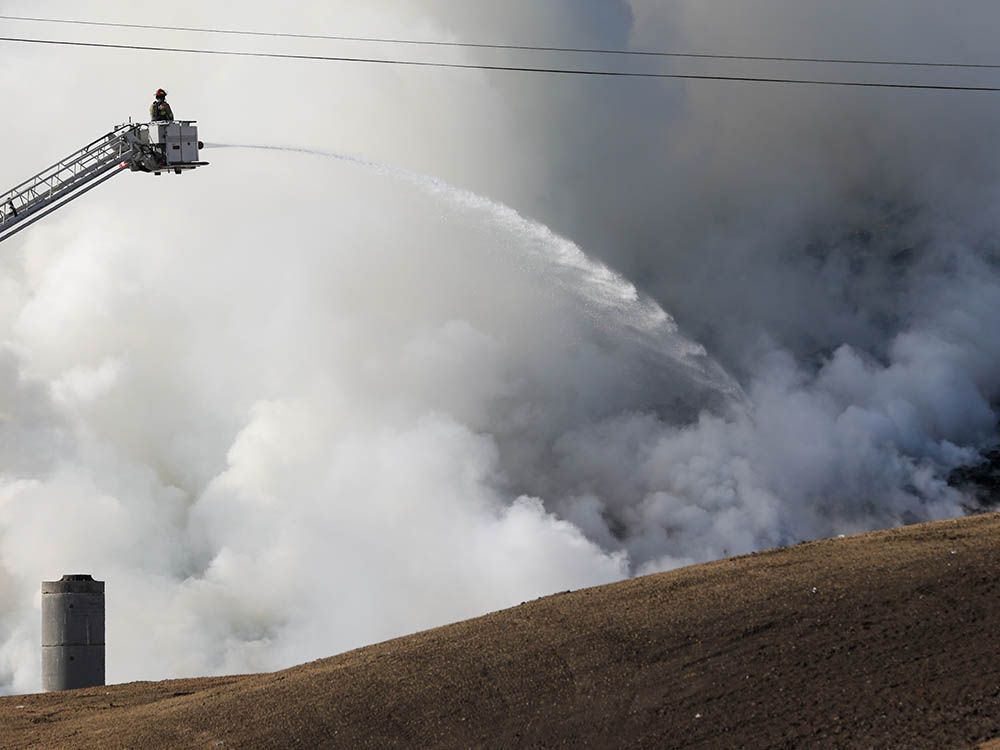 The area is filled with construction waste and dry rubble.

Calgary fire crews and other first responders have been battling a blaze at a southeast landfill throughout Friday night and the early hours of Saturday morning.

Firefighters responded to multiple calls regarding a smoke plume near the southeast community of Quarry Park around 8:10 pm Friday. The smoke cloud could be seen from multiple vantage points and crews were met by landfill staff near 24 street and Quarry Park Blvd S.E. Fire crews travelled to the top of the landfill where staff were actively working to extinguish the flames, a news release said Friday evening.

A large bulldozer was being used to put the fire out before it malfunctioned as was overcome by the fire. The machine’s operator was able to exit the vehicle unharmed but the fire continued to grow, forcing the fire crews to intervene with remote water supply and hose streams.

Calgary fire and landfill staff continued to work on the blaze throughout the night to contain the fire to a single pile of rubbish. The area is filled with construction waste and dry rubble.

Calgary police, CP Rail and Alberta Environment staff all attended the scene. Firefighters will remain in the area until the fire is under control.

No injuries have been reported and the cause of the fire is under investigation.

Environment Canada has issued a special air quality statement in response to the fire, warning that there are elevated levels of air pollution, particularly in southwest Calgary.

“Individuals may experience symptoms such as increased coughing, throat irritation, headaches or shortness of breath,” warns the alert.  “Children, seniors, and those with cardiovascular or lung disease, such as asthma, are especially at risk.”

Residents are asked to avoid the area for the next 24 hours.